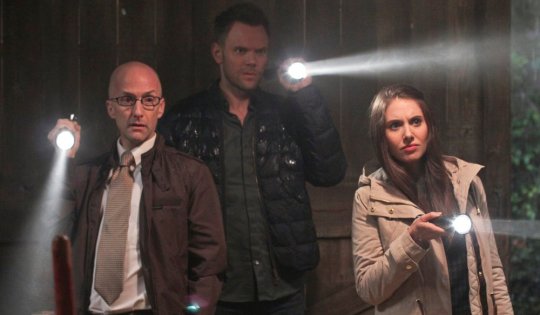 Ever since “Community” pulled out a mafia episode and a paintball episode at the end of season one, the show has been praised for its “high concept” episodes — ideas that can be easily summed up and will appeal to a number of people. For instance, you can describe “Abed’s Uncontrollable Christmas” as the stop-motion animated episode, or “Intro to Felt Surrogacy” as the puppet episode.

Some of these high concept episodes work better than others, and for me, “Basic Intergluteal Numismatics” wasn’t firing on all cylinders. The episode functions as a detective movie parody where Jeff (Joel McHale) and Annie (Alison Brie) team up to figure out the mystery of the Ass Crack Bandit, who has been terrorizing the school by putting quarters in people’s butts.

How you felt about this episode probably came down to two things: the detective movie parody and the butt-related humor.

I was a huge fan of the parody part of the episode, which reminded me a lot of David Fincher’s “Zodiac,” particularly with the Ass Crack Bandit sending notes gloating about his crimes. I smiled at the genre parody moments, such as when Jeff and Annie sat down at the computer to search for Dave Matthews’ fans and it took less time than Jeff expected, or when they destroyed a greenhouse classroom while chasing after a suspect.

I had less fun with the butt humor parts of the episode, but it didn’t completely detract from the better moments. It was also oddly fun to see a group of people go from calmly sitting on the bleachers to running away from the fear that a coin will be put down their pants.

Speaking of better moments, a good portion of those go to Dean Pelton (Jim Rash), who has been fantastic in all three episodes so far this season. He has some great one-liners, including “If you wanna make Trouble, go to Parker Brothers.” It’s a witty but ridiculous thing to say, which ultimately sums up the dean’s character.

Alison Brie also has some good physical comedy moments. When Jeff tells her she can’t squeal after he agrees to work on the case with her, Brie’s victory dance is hilarious, and when she picks up her keys in Duncan’s office in a weird way to avoid bending over, it’s one of the funniest things that happens in the episode.

And yes, that last sentence said Duncan’s office. Professor Ian Duncan (John Oliver), who was last seen in season two’s “Applied Anthropology and Culinary Arts,” is back for several episodes this season. Duncan gets called in to help with a psychological profile for the case and is then mistaken for the Bandit by Annie. He wasn’t seen much in the episode, which is probably for the best as he’s not a main character, but I enjoyed what little screen time he did have.

“Basic Intergluteal Numismatics” ultimately puts the blame on Star-Burns (Dino Stamatopoulos), who faked his death in season three and has been living in the Greendale stables ever since. While I was excited about Duncan’s return, I was less impressed with Star-Burns’ reappearance because I never found his character interesting enough to have around beyond brief jokes.

Even though Jeff figures out Star-Burns isn’t actually the Bandit, Jeff and Annie can’t catch the criminal when Shirley interrupts their pursuit with the news that Pierce is dead. It’s a shock of a moment that didn’t really work for me. First of all, I already knew that Pierce was dead because I had read the summary for next week’s episode. Second, I really wanted to know who the Bandit was, and Shirley’s announcement prevents that. While it may be an ending not unlike “Zodiac,” it feels abrupt and because of that, unsatisfactory.

Ultimately, “Basic Intergluteal Numismatics” suffers from some of the same problems “Introduction to Teaching” did. It separates Jeff and Annie from the rest of the group, who don’t even get their own plotline this episode — aside from Troy, who becomes one of the Bandit’s victims. It also relies heavily on the gimmicky nature of the detective parody and butt humor.

“Basic Intergluteal Numismatics” isn’t really a bad episode. In fact, it provides a lot of laughs and some great moments of parody, but I know “Community” can deliver better episodes and I want to see them. Maybe next week’s episode, which concerns Pierce’s death and distribution of his will, can provide me with the “Community” I know and love. Here’s hoping.