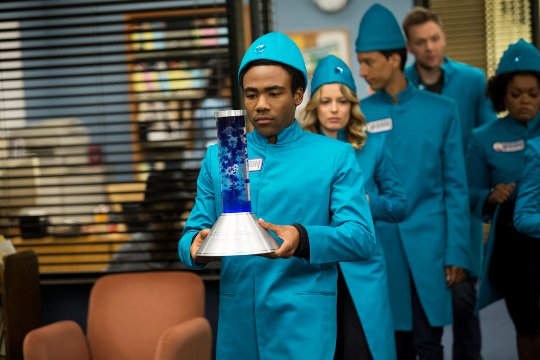 Thankfully, “Cooperative Polygraphy” addressed a few of the concerns I’ve had with this season of “Community” so far, namely the splitting of the group and the lack of emotional connection. This episode was a group effort with all six of the study group members involved in the main plotline, and of course, since they were dealing with Pierce’s death, there was bound to be emotion involved somewhere.

After returning from Pierce’s funeral, the study group is confronted by Mr. Stone (Walton Goggins of “Justified”). He tells them they all must take a polygraph test because Pierce said in his will that it was entirely likely that someone in the group murdered him, which is exactly the kind of ridiculous claim Pierce would make.

Of course, the test devolves into utter chaos as Pierce’s questions reveal secrets the group hid from each other, like the fact that Troy (Donald Glover) stole his and Abed’s (Danny Pudi) special friendship handshake from a YouTube video and that Abed planted trackers on everyone in the group. In this way, the episode is reminiscent of season two’s “Intermediate Documentary Filmmaking,” where Pierce gives the group gifts from his deathbed which ultimately turn them against one another.

In spite of some good jokes, I wasn’t entirely invested in this episode until Pierce’s true intentions were revealed. As one of the final questions, Pierce — through Mr. Stone — asks Britta, “Do you know that you hate yourself more than you should, and that your passion inspired me?” It took my breath away, and not only because Britta is my favorite character and well-deserving of some praise from someone at this point. While it seemed in the rest of the episode that Pierce wanted the group to think they were horrible people, he ended up complimenting each and every one of them (except Abed, who Pierce thought was “insane”).

Now, I was expecting this kind of twist at some point in the episode, but that doesn’t mean it wasn’t effective. As last week’s Dungeons and Dragons tribute from Neil reminded us, Pierce wasn’t always a bad guy. He usually wasn’t a great guy, but sometimes he tried to be better.

This episode was a fitting end to Pierce’s time on the show. From beyond the grave, he managed to give everyone a gift that they would enjoy (again, except Abed) — and also a container of his sperm (Abed did get one of these). If the fact that he gave them all some of his sperm while simultaneously restoring happiness to the group doesn’t sum up Pierce, I don’t know what does.

“Cooperative Polygraphy” also introduced the fact that Troy will be leaving the show soon. As part of his gift, Troy received $14 million from Pierce in shares of Hawthorne Wipes’ stock, but he has to take a boat trip around the world to earn it. The boat is fittingly named “Childish Tycoon,” as part of the reason Glover is leaving the show is to spend time rapping under the name Childish Gambino.

My favorite moments of this part of the episode were between Troy and Abed, who are such close friends that I was extremely upset when they were fighting in season three’s “Pillows and Blankets.” Of course Troy leaving would hurt Abed most. Even though I knew that, it was still awful to hear Abed say that Troy’s departure was, “Cool. Cool, cool, cool,” only for the polygraph lady to say that it was a lie.

The last few minutes of “Cooperative Polygraphy” are largely Mr. Stone talking while the study group members sit around in silence. It’s a weird ending to the episode, and it leaves the fact hanging that Troy will be gone soon. But since that’s something we’ll be dealing with in the next episode, I thought this ending was fine. Like the study group, I often found myself annoyed by Pierce — but we should let “Cooperative Polygraphy” belong to Pierce. He’s earned it.