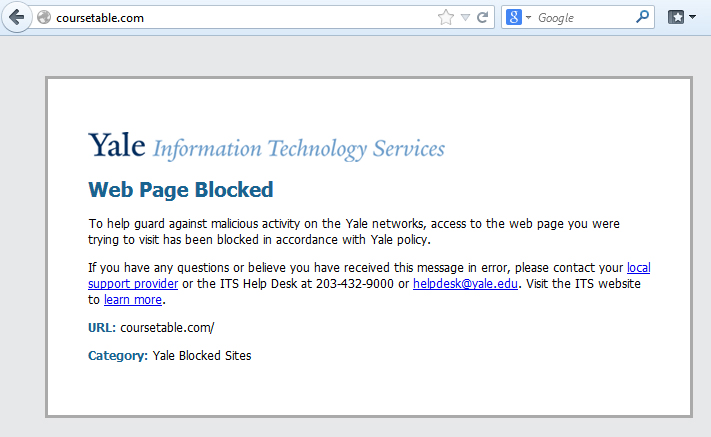 Yale University has made it clear that students’ right to explore the Internet is far less important than its command of authority over students.

In January 2012, two Yale students, Harry Yu and Peter Xu, created an alternate course website that mimicked Yale Bluebook, an online course book for students to search for various classes. The site was named “Yale Bluebook Plus” (YBB+). YBB+ allowed students to search for courses but also allowed them to sort through classes by average rating and workload. But what also made this site better was that it was technologically advanced. The YBB+ had a more lightweight user interface and was more efficient than its competitor, and compared course statistics much more easily.

Then Yale’s ego got in the way once the university found the efficiently run site was far more improved than the original and decided to blocked it under Yale’s Wi-Fi network due to copyright issues. However, once the students tried to upload it again under a different name, Yale then used the excuse that it “let students see the averaged evaluations far too easily.” The students were then warned that if they posted the website again they would have to attend a punishment committee.

When attending an Ivy League institution that opens a multitude of doors for you to explore education with high-achieving scholars, it brings into question why Yale limits students’ ability online and does not further encourage this sort of application creation. After this, Yale student Sean Haufler created a Chrome extension that enables students to use the site without infringing on copyright, but he now fears that Yale will also penalize him as well.

Yale, an institution for higher thinking, has threatened to punish students for creating a website that better performs the original. They censored something that was student-supported as well as a better and more user-friendly version of what students were already using. Sean Haufler has now taken the opportunity to prove to Yale how ridiculous its censorship policy is by providing another outlet for students to access the site. His project also shows how students are creating a better version of what Yale is already offering. Haufler improved what had already been established and in a way that satisfied all of Yale’s issues with the previous Yale Bluebook.

This then draws up the question: Instead of being threatened to attend a punishment committee, why are students not invited to work with the developers to figure out how to incorporate the successful parts of this new version with their current interface? The original Yale BlueBook was a student-run site that did receive permission to use Yale’s data. So why is Yale preventing students from using this sort of data again? It is such an easy solution to work with students rather than just censor student-supported projects.

But although it seems reasonable to be upset with Yale’s censorship, some may be concerned with the idea that the student website did place a sort of bias on class selection, alleging that it creates a means to discourage a student from taking a rigorous course due to the workload and ignore a class that will intellectually challenge the student. But this is no different than what the website Rate My Professor offers. It is ultimately up to the student to decide what class he or she wants to take.

However, inhibiting students from vocalizing what they think of the class should not be a reason for the school to block the site. Subjectivity in terms of how people rate the course load is going to be inevitable so it seems like an unreasonable decision for Yale to make. There’s nothing really that different about Yale Bluebook Plus anyway — but that it is more efficient, technologically advanced, and run by student geniuses.

The idea of a university is that students should be engaged in student-run projects to advance the university in technology. This applies to UC Riverside as well. But on this campus, the issue is not with students creating websites that violate copyright policies, but with having less efficient sites such as GROWL — which tends to shut down late at night — and other UCR-utilized sites.

UC Riverside should take more notice of innovative students within the university to create sites that are faster, function all hours of the day, respond quicker to commands and most importantly do not crash during class registration. Universities are like a microcosm of what students will experience in the real world, so engaging students in projects such as this will also provide experience in their own major. Opening up the possibility for students to improve upon the technology that is already in use will provide a springboard for students to engage in real programs for vital career experience.

The students of Yale have taken the initiative to ameliorate the technology of the university but Yale’s decision to penalize students is rather extreme. Yale University should take this as a friendly critique of their own site and work with students by asking for constructive feedback and providing a chance for students to work on the site as well. Universities should be more open to the concept that students have an upper hand in making accommodations to their own scholastic needs.

Ted Cruz is an embarrassment to the Senate and should resign

Self-care is all inclusive, and advertisements should reflect this

Paving the way for renewable energy in California