Highlander
Home Radar of Montreal’s Indie Encore at the Barn 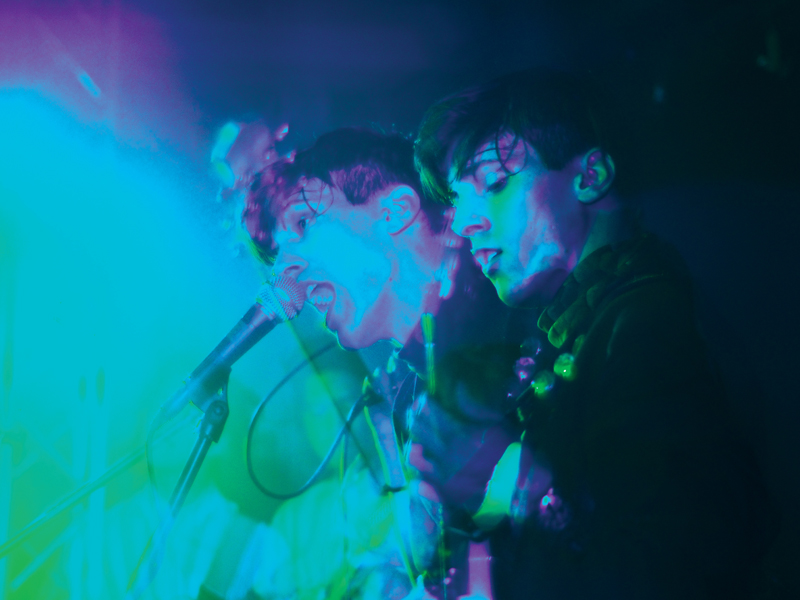 “They’re in there being magical and shit,” said lead singer Zahira Gutierrez of Wild Moccasins, referring to legendary indie band of Montreal waiting in the wings during their performance. It was indeed a magical night at the Barn as a sold-out crowd welcomed Wild Moccasins and of Montreal with raucous dancing and cheering throughout the night. The two bands combined to put on a spectacle that electrified the Barn as the crowd — and the bands — danced the night away.

To sum up the night simply, it was just plain fun. Everything about it was crazy, fast, sweaty and crowded; from the crazy, hipster crowd to the actual acts, there was never a dull moment. The audience, packed wall-to-wall, was full of 20-somethings sporting flannel, handlebar mustaches and crazy-colored hair. They relaxed until the opening act, Wild Moccasins, walked on stage. Wearing a kimono and rainbow eye shadow, Gutierrez displayed her infinite energy to the crowd, swinging her hair around wildly while singing passionately to the crowd. The indie pop five-piece mixed Gutierrez’s bright vocals with guitarist Cody Swann’s hypnotizing guitar riffs to concoct a lively take on power pop.

As the lights went up and of Montreal took the stage, a noticeable part of the band was missing. Lead singer and primary songwriter Kevin Barnes was nowhere to be found as the band played a couple of random chords, trying to confuse the crowd. Moments later, Barnes emerged from the side of the Barn to boisterous cheers from the crowd, mumbling into the microphone until suddenly exclaiming, “The last 10 days have been a motherfucker / I didn’t know if I’d survive,” from opening song “Triumph of Disintegration.” From there, it turned into a giant dance party. Whether the crowd was just awkwardly moving in place or full-on body thrashing, everyone moved in one way or another.

Despite their fast and happy tunes, of Montreal still managed to mix in a few ballads as well. “Raindrop in My Skull” illustrated that while they have fun, they can also make sadder, calmer sounds. The vocalist switched at one point from Barnes to Rebecca Cash, the only female in the band. Her voice provided a light harmony and complimented the soft sounds of the accompanying guitar and drums. It was a refreshing break from the constant movement and gave the audience a chance to listen to their surprisingly deep lyrics.

Though billed under the label of “indie rock,” it is difficult to pinpoint an exact genre for of Montreal. The show ranged from psychedelic pop to shades of Americana rock and more. Some of their songs, including the aforementioned “Triumph of Disintegration” and “We Will Commit Wolf Murder,” managed to mix glam rock and funk to create a unique and crazy sound that even had Barnes taking his shirt off (much to the pleasure of the audience).

An extremely surprising and rewarding part of the show was that even after their act, the delayed stage lights signaled that they were not done just yet. With the crowd repeatedly screaming, “Encore! Encore!” Barnes ran back onto stage with his band, ready to perform again. In the past, encores at the Barn have been uncommon, but perhaps because of the band’s stature in the indie world, they obliged and gave the crowd one more song. Seeing them come back out and perform one of their most popular songs, the poppy and fun “Gronlandic Edit,” for one last dance session is a testament to their popularity among Riverside’s indie-loving crowd.

The fact that the Barn was able to pull in a name as large as of Montreal is a large step forward for the venue. It’s hard to remember the last time an artist from the indie rock genre produced a sold-out Barn show (the Omar Rodriguez-Lopez Group aside). In addition, the Barn’s highly attended hip-hop shows last year prove that the venue is capable of attracting a wide variety of musical fans with great results — and now, doing so consistently with both genres is key. Of Montreal certainly showed how much spirit indie rock can bring to the Barn. Here’s hoping that future Barn headliners Hellfyre Club and Black Uhuru can show their mettle for their respective genres at upcoming shows, and that this is the beginning of a bright future for indie rock at the Barn.