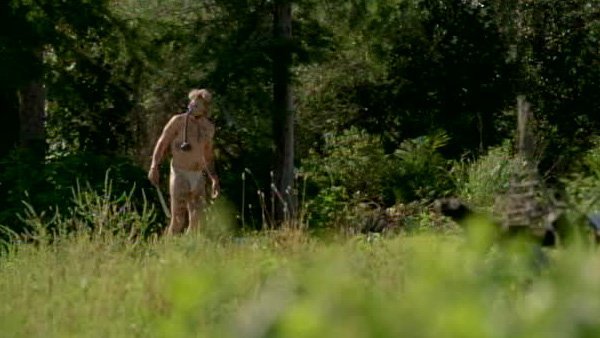 If you’re looking for a man wielding a machete wearing nothing but stained tighty-whities and a gas mask, then the newest episode of True Detective is just for you. The battle between Bible Belt religion and Rusty Cohle’s (Matthew McConaughey) never-ending ontological philosophic crusade is stronger now than ever. Marty Hart’s (Woody Harrelson) crumbling family life faces even higher stakes. Not to mention, there’s a pagan-cult-acid king murderer still on the loose with our two detectives closing in.

This week’s episode, “The Locked Room,” encompasses the tension of being locked in a room that’s too small. It’s ’92, and Hart and Cohle are standing in the back of a revival tent church watching a reverend with mutton chops shout to the crowd. The two detectives immediately start bickering once Cohle asks what the average IQ of the crowd is. Cohle continues his tirade by saying, “If the only thing keeping a person decent is the expectation of divine reward then, brother, that person is a piece of shit.” Cohle’s philosophical muses immediately clash with Hart’s stoic belief that religion makes the world a better place, and within just five minutes of the episode, the viewer is ready for Marty and Rusty to duke it out.

“The Locked Room” was all about Hart’s character and family, and Harrelson matched the acting that McConaughey has brought to the table. Hart and his mom have a talk with their youngest daughter as to why she’s been drawing men and women having sex in her diary — she’s only seven. Quick cut to the married couple in the bedroom and the discussion switches to Hart: Why he’s working too much, why he’s gone all the time, why he won’t talk. Tension continues to rise in the tiny bedroom until Hart finally breaks down. He struggles to put words together until “I’m all fucked up” comes out, except he tries to blame it on the murder, not the woman he’s been cheating on his wife with. You can see the shame in his character as he delivers those lines and does everything to keep the tears in his eyes from falling.

Marty’s inability to juggle the case, his family and his girl on the side leaves the viewer waiting for him to drop all the metaphorical flaming chainsaws in his life and, luckily, the watcher doesn’t have to wait long for them to fall. Marty is on a double date with his wife, her friend and Cohle. They’re at a honky-tonk when Hart sees his courtroom mistress from across the way. She’s with another man. Within a couple of scenes, he’s driving over the curb and slamming his fists against her house. He breaks through and finds another man in her bed. Harrelson has a crazed and strained look as he chokes the man out, demanding to know if she sucked his dick. Once he gets his answer he calms down, and “I’m not a psycho” is all he has to say. In this one scene we see all the guilt and shame that has become too much for the hero cop, who finds pride in keeping things to himself.

In case anyone was wondering if this episode was even about a murder, the last 10 minutes are all you need. The two detectives discover a dead woman on file from a few years back that was ruled an accidental drowning, but has the same tattoo as their own victim. Turns out the same girl who died “accidentally” has a boyfriend who, among other things, skipped parole and was busted at a meth and LSD lab. The men tear down the highway towards the man’s house. A voiceover from Cohle in the present aides the camera as it pans over a field of shacks. He says, “Man, that place. It reminded me of my pop talking about ‘Nam.” The voiceover continues as the camera focuses on the door of a seatrain opening and a man walking out, wielding a machete and donning a gas mask. Cohle has only one thing to say: “Like a lot of dreams, there’s a monster at the end of it.” These final words ring in your head as they accompany the image, leaving you confused but intrigued, wanting to stay on the couch until next Sunday rolls around.