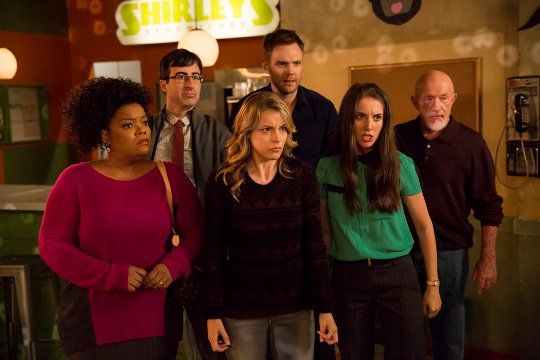 The opening scene of “Analysis of Cork-Based Networking” returns us to the Save Greendale Committee established in “Repilot,” a committee that includes the remaining members of the study group as well as Professors Hickey (Jonathan Banks), Duncan (John Oliver) and Chang (Ken Jeong).

With the study group now missing Pierce and Troy, it makes sense to bring in other characters to take their places, and it helps that two of the three — Duncan and Chang — are professors that we’ve gotten to know in previous seasons. It’s unlikely that Pierce and Troy’s absences can ever really be forgotten by those of us who have been watching “Community” from the start, but “Analysis of Cork-Based Networking” feels like a normal episode of the show even with those absences.

After the opening scene, the Save Greendale Committee largely splits up into three separate plotlines for the rest of the episode. What I like best about this week’s separate plotlines is that each member of the study group gets screen time, which isn’t always the case. But with a smaller cast, the five remaining group members should all get time to shine in each episode.

The main plotline revolves around Annie (Alison Brie) and Professor Hickey. The two embark on a quest to get a corkboard hung up in the cafeteria, encountering plenty of guest stars along the way. This plotline works best when Annie plays hardball with the guests in an attempt to get the corkboard hung up faster, because it’s always nice to see sides of Annie’s character beyond the “good girl.”

Of course, the guest stars are supposed to be the main draw here. I’d known for months that Nathan Fillion of “Castle” and “Firefly” would be guest starring on “Community” this season, so I was a little upset that he was only in one small scene. But that’s all the time any of the guest stars — including comedian Kumail Nanjiani, Paget Brewster from “Criminal Minds” and Robert Patrick from “Terminator 2” and “The X-Files” — get as Annie and Hickey visit various members of the Greendale staff in turn to discuss the corkboard situation.

Eventually, Annie’s plot leads into another — the dance planning plotline, which features Shirley (Yvette Nicole Brown), Jeff (Joel McHale), Duncan and Chang. After a failed attempt at decorating around the theme “Bear Down for Midterms” (Chang got the idea from a news story about a bear mauling children at a birthday party), they quickly change the decorations to dogs based around the new theme “Fat Dog for Midterms.” The fact that Chang would suggest the idea because of the news story was as funny as the ridiculous Fat Dog theme.

The dance planning plotline ends with the dance being held and Garrett (Erik Charles Nielson) discovering that it had formerly been a bear party, which could have been funnier if it hadn’t been the last thing in the episode. Annie and Hickey’s plotline, however, ends on a better note when Hickey hangs up the corkboard himself after the frustrating run-around with the guest stars earlier.

If Hickey is going to be around as often as he has been so far this season, I appreciate the fact that “Analysis of Cork-Based Networking” integrated him into the study group’s activities and expanded the character beyond “grumpy Criminology professor.” By making him care about Annie, the writers insured that I started to care more about Hickey as a character.

The episode’s third plotline involves Abed (Danny Pudi) and Britta (Gillian Jacobs). After Abed spoils Britta on plot details from the made-up show “Bloodlines of Conquest” — obviously a substitute for HBO’s “Game of Thrones” — Britta skims through the novels to spoil Abed back. Although this plotline didn’t have a lot of bearing on the episode at first, I appreciated it simply because of its discussion of spoiler culture and “Game of Thrones” pseudo-references, including “Prince Ironstone’s daughter is his mother” and “Queen Stevarios massacres the entire Vogadesh family at Lord Brince’s funeral.”

While avoiding Britta, Abed meets a guest star of his own — Katie Leclerc from “Switched at Birth.” The two communicate in sign language because Leclerc’s character, Carol, is hearing-impaired and Abed is wearing headphones to avoid Britta’s spoilers. It’s fun seeing Abed mess up the sign language and seeing his relationship with Carol grow, but the funniest part of the plotline is when it turns out Britta paid Carol to spoil the end of “Bloodlines of Conquest” for Abed.

Carol’s betrayal means Abed gets upset since he really liked her, but it also leads to my favorite part of the plotline: Abed’s reunion with the coat-check girl, Rachel (Brie Larson), from season four’s “Herstory of Dance.” That episode was easily my favorite of last season, in large part because of Abed’s relationship with Rachel. She may have no bearing on the show beyond this episode — it’s uncertain if Larson will appear in the rest of the season — but with Troy gone, now is a good time for Abed to develop further as a character.

The plotlines were all fairly enjoyable, but the episode never really came together as a whole for me, even though everything literally came together at the ending dance. “Analysis of Cork-Based Networking” was an average episode of “Community,” admirable after all the shake-ups the show has put up with recently — but still somewhat disappointing.

And with that, we’re on hiatus for the Winter Olympics. See you all Feb. 27 when new episodes return.