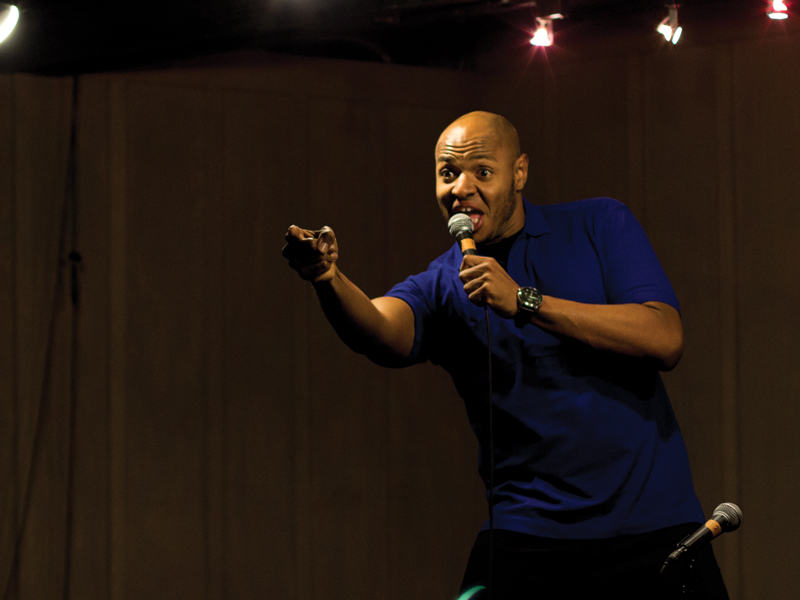 With midterms approaching, stress is flooding through UCR. But when students can barely stay afloat, the Well’s “Active Minds” throws students a life preserver. As a counseling organization through the Well, Active Minds promotes mental health — providing UCR with “Therapy Fluffies” in week 10 and “Mid-term Nap Sessions” when Coffee Bean’s line is too long. But sometimes, students itch for a little more than a snooze. At 7:00 p.m. last Thursday, Active Minds hosted Laugh More, a free comedy show at the Barn celebrating the benefits of laughter on mental health and attempting to diminish the stigma around mental illness.

When I asked if she was stressed going into week five, third-year Michelle Mitani said, “No … Not yet, just mainly sleep deprived.”  I think many can relate to this statement — especially around week eight when students look like they are planning to commit murder. With more caffeine than sleep in their system, students dragged their feet inside the Barn with loud yawns following them in as they approached the sign-in table. Brochures from the Counseling Center and cards with stress reduction tips covered the table where Active Minds members provided students with information about dealing with stress and depression. Students admired a “How I Will Laugh More” poster covered in Post-its that read “make others laugh” and “watch more funny baby videos,” which brought smiles to faces. Many kept those in mind when members handed out free scantrons for those up-and-coming midterms.

In recent years, I noticed how laughter went from a belly-aching laugh in response to a joke to a heavy breath through your nose while scrolling through memes on a phone. When silence and cellphones filled up the 25 seats in the Barn, it was no different. Before the show started, I found students showing their friends funny pictures on Instagram while the DJ’s playlist boomed overhead.

Active Minds program coordinator, Jade Lenier, opened the show by talking about some of the benefits of laughter, such as promoting better sleep and triggering the release of endorphins, since “endorphins make you happy, and happy people just don’t kill their husbands,” Jade said, quoting “Legally Blonde.” The crowd’s applause announced the first performers: UCR’s Improv Anonymous.

Improv Anonymous warmed up the students’ abs with their own skits and game. Their host, improv member Squeeze, had an audience member participate in the “Dating Game.” The audience participant joined three other improv members on the stage and each were given a character, such as foot enthusiast, Pocahontas and a dolphin. When the last improv member joined them on stage, he had to guess who they portrayed, asking questions like, “What is your ideal date?” and receiving answers of “Somewhere colonial … I can show you the colors of the wind … and get married.”

After the “Dating Game,” Squeeze asked for adjectives and nouns to create an original movie title, resulting in “Sticky Cat.” When Squeeze pressed her imaginary remote to change the movie to surround sound, French and even 3D, Improv Anonymous members ran through the audience. One of the improv member jumped on top of the front row to purr and the audience was in a full uproar.

“We are in a barn with no fucking animals?!” Comedy Central veteran Dana Eagle asked. Tears from yawning soon turned into tears from laughing as the students cackled in the audience. “But no one thinks it’s a little weird that they’re serving chicken in the back?” Eagle brought her unique voice to comedy stages all over the world and chose to focus her act on the negatives of life and how to laugh at them. Bringing up her own disorders, such as bipolar disorder and depression, she tried to relate to students, asking students with the same disorder to clap. Surprised with the applause, Eagle shared her story of her lowest point. She noted, “At least you guys know you’ll have a future. I thought I had nothing, but look, I’m on stage in front of you, beautiful people. They say ‘once you hit rock bottom, you can only go up.’ False! You can go way further, but you have to be the one to pull yourself up.”

Even though she pointed out how Vodka may be cheaper than Kaiser’s insurance, she emphasized, “These are just jokes, by the way! We need to learn how to laugh at them so it doesn’t get any worse!” She poked fun at herself as a member of the LGBT community and how most perceived her as a vegetarian, when really she is just a “vag-itarian.” She closed her act with an original song and threw “pills” into the audience, because every student needs Smarties candies.

Phones were tucked away, cheeks burned from smiling and everyone was completely engaged in the performances. Next was Tony Baker, actor and comedian. He illustrated his venture out to Riverside, relating to almost every commuter. “It’s like a conquest out here, I feel like I’m from Lord of the Rings!” He immediately touched upon the “good-looking bunch” that sat before him, while pointing at the business and political science majors who were 18 and 19. Baker felt like he found the real “Life of Pi” in the audience when he found a 21-year-old. Endless streams of tears ran down faces when he shared his fear of ghosts: “If I saw pale feet Imma get the hell out of there … I live in a black household, if I see pale feet, I know something is wrong!” When he finished with his engagement with the crowd, he explained that everyone (including men) need a good cry from time to time. “Pop on ‘The Pursuit of Happyness,’ and I feel refreshed!” he said.

After the show, students chatted outside, looking more alive than after a Red Bull. I asked the sleep-deprived student, Michelle, how she felt after. “Better, still a little tired, but better!” she laughed. So when that Spanish exam creeps up on me, all I have to do is think back on this host of performances and just remember to laugh more.