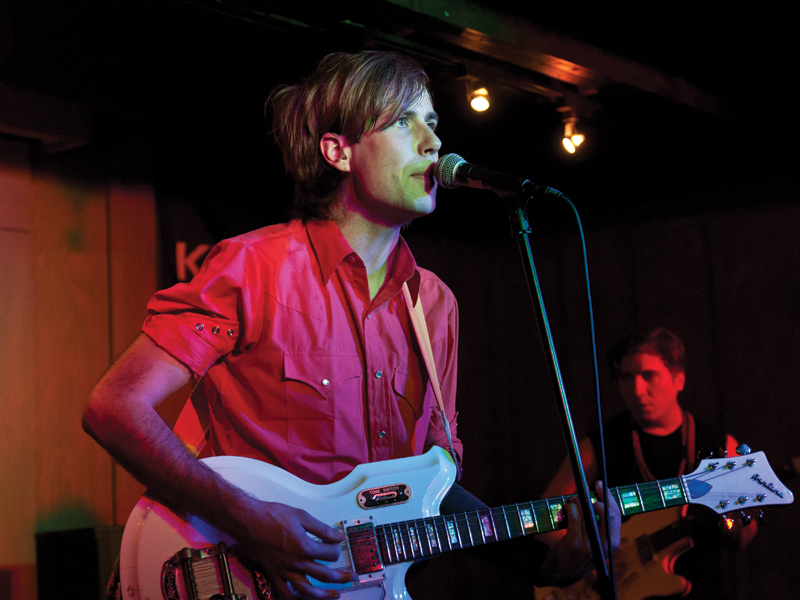 Continuing their winter concert series, the Barn invited indie rock band Islands to grace the stage. Personally, as it was my first time at the Barn, I didn’t know quite what to expect. I came to find, however, that it was the perfect place to host a band like Islands; with dim lights and a cozy set up, the Barn was able to provide the public with the opportunity to fully appreciate the phenomenal musicianship of not only Islands, but opener Haunted Summer.

The emergence of a real crowd lagged, with the security guard even joking “You may enter now … Oh please, not everyone at one time!” as about four of us cautiously headed toward the door. The silence in the air soon filled with the buzzing of a small crowd and the anticipation of a music-filled night. Bridgette Moody and John Season, the duo who make up Haunted Summers, finally made their way onto the stage, intriguing a few concertgoers — and by the looks of some audience members’ phones glued to their faces, failed to interest others. However, a barely-there crowd and disinterest did not discourage the duo. Moody flawlessly flipped her green-tipped hair and entranced those who were listening with haunting and undeniably powerful vocals. I even saw a few faces light up with an excited “Hey, I do know that song” expression when the band played one of their singles, “1966.”

Haunted Summers effectively set the stage for the eccentric Islands, who drew in a much larger crowd. As soon as lead singer Nick Thorburn opened his mouth, he proved that you actually can sound just as good live as you do on a recording. The band is just plain talented. Thorburn was carried by consistent rhythmic drum patterns, addictive piano and guitar melodies and an overall full sound, provided by fellow band members Evan and Geordie Gordon. It felt as if Islands’ huge sound consumed the entire Barn, which did wonders for the emotion of the crowd.

The audience’s energy hit a high note, with only a few looking on as if they were simply spectators. People were dancing and a few were even shouting lyrics back at Thorburn. Islands kept their set interesting, including hits like “Shotgun Vision” and the moody “Death Drive,” but also incorporated a few soothing ballads. As I looked around, it was obvious that this was a good idea; there were a surprising amount of couples out on the floor who gratefully took the opportunity to use Thorburn’s smooth vocals and the band’s mellow vibe to lazily slow dance.

What really made the show special was the fun that the band was obviously having. Even as a mic went out, Islands brushed off any agitation and kept the crowd’s attention and respect. Thorburn even briefly left the stage to dance and interact with a few fans near the front of the stage, which generated an ecstatic reaction from almost everyone in the Barn. There was absolutely no evidence of the night’s slow start; the audience’s enthusiasm grew as more and more time passed, and the sensation in the room was electric.

As Islands prepared to end the night with their hit song “Can’t Feel My Face,” it almost felt as if the night had just begun. To further confirm this feeling was the crowd’s heavy disapproval when the band proceeded to leave the stage — and soon, the chanting commenced. “Encore, encore, encore!” It was obvious the crowd wanted more, and Islands did not deny their request. They reemerged and performed one more song while the audience showed their appreciation by shouting and screaming even louder than they had during the previous song.

Islands was a great pick for the Barn. Although the crowd never got huge, the intimacy that the band shared with a smaller audience was awesome. Talent and professionalism are qualities that Islands definitely doesn’t lack, further proving they deserve all of the praise they receive.