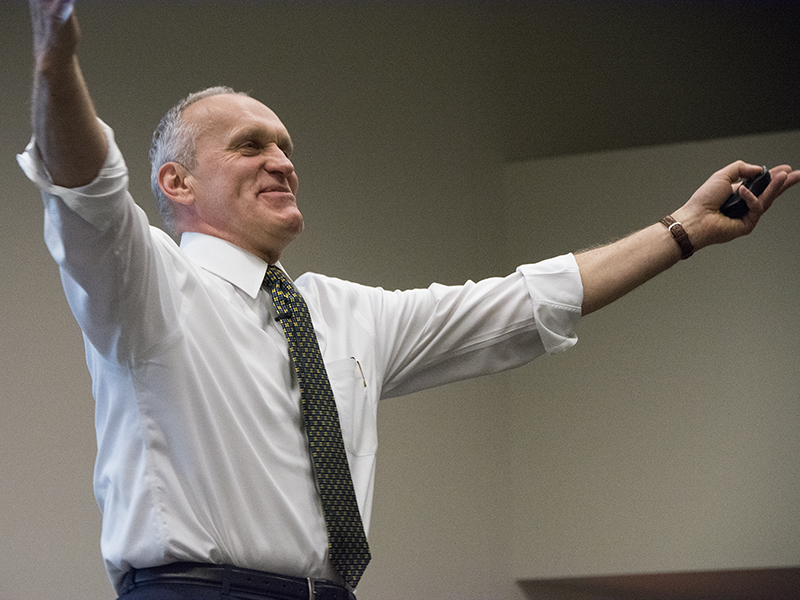 During his town hall on Feb 19, Chancellor Kim Wilcox announced the launch of “Finish-in-Four,” a pilot campaign seeking to increase UCR students’ four-year graduation rate, which has remained nearly the same at around 40 percent over the past 20 years. Another notable initiative includes joining the planned University Innovation Alliance, a consortium with 10 other prestigious research universities across the nation that have demonstrated commitments to ensuring the academic success of university students.

The establishment of University Innovation Alliance aligns with UCR’s 2020 strategic plan, which calls for UCR to develop a competitive university profile that qualifies to become a member of the Association of American Universities (AAU).

According to Wilcox, two-thirds of the institutions within the alliance are already members of AAU. “In that regard, we can start to claim a profile that looks like our AAU-aspiring institutions,” he said. “This is not a bad set of universities to be in the same club with.”

The Ford Foundation and Lumina Foundation — both of which are dedicated to the expansion of student access in higher education — selected these 11 universities because they have demonstrated commitments to assisting students with disadvantaged socioeconomic backgrounds. Recently, the Bill and Melinda Gates Foundation also came on board to support the consortium’s mission.

The chancellor plans to allocate the funds received through these foundations to develop and expand the university’s new and existing programs. “We’d be funded to experiment with the successful program that we have, and see if there’s any way we can do better,” said Wilcox. “But I think, perhaps more importantly, we’d be seen as a group of leaders in the country so that others will look up to us, as the University of California, Riverside, as a place for innovation and student success.”

Wilcox believed that UCR is seen as a national leader because of its consistent graduation rate among students of different socioeconomic backgrounds. For example, the graduation rates among African American (66.9 percent), Asian American (72 percent), Latino (62.1 percent) and Caucasian students (63.1 percent) — are marked by an incremental difference between them of less than 10 percent.

“We’ve created an environment that is equally effective for everyone. It isn’t a world filled with privileged white people,” said Wilcox. “And I should tell you, when the chancellors and presidents from these 11 universities get together … at least once — oftentimes more than that — UCR is pointed to as the model. So among these 11 models, we are seen as the model.”

In response to Brown’s criticism, Provost Dallas Rabenstein appointed faculty and administrators to form a Graduation Rate Task Force in June of 2013 to identify problems that have hindered students from timely graduation and provide recommendations on how to increase students’ four-year graduation rate.

The UCR Graduation Task Force came up with a total of 37 campus recommendations to the Office of the Executive Vice Chancellor in January of 2014. One of the most notable recommendations is launching the “Finish-in-Four” campaign that seeks to encourage entering students to take an average of 15 units per quarter to graduate in four years.

In 2006, UCR students took on average 14.7 units per quarter. However, the number plummeted to 13.8 units per quarter by 2012. The task force revealed that students’ decreasing enrollment units per quarter was largely due to the 16-unit cap constraint, which was lifted to 17 units for the upcoming spring quarter of 2014.

Other aspects of the “Finish-in-Four” campaign include addressing the student cohorts by their graduating class rather than the number of years that they have stayed in the university and creating individual four-year course plans with freshmen during summer orientations.

Vice Provost Steven Brint, lead investigator of the task force, stated that the logistics behind the “Finish-in-Four” campaign are not known at this point, but the vision is being formed now as the group is in the process of planning for the campaign to be launched at upcoming Highlander orientations.

“Students who come in for orientation in the summer of 2014 will certainly see an emphasis being put on four-year graduation; they will be seeing themselves as the graduating class of 2018,” said Brint. “Students who are currently enrolled will soon see the differences in emphases as well.”