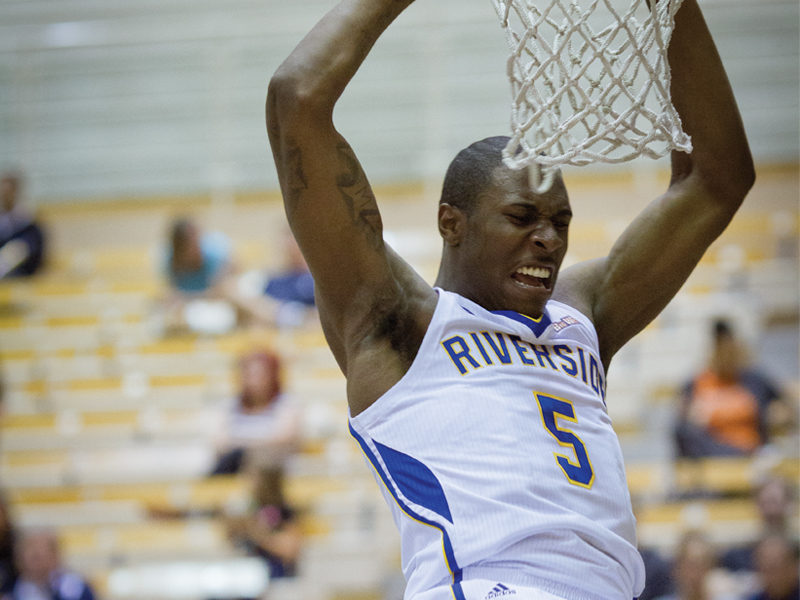 When it was time for tip-off Thursday night, there was not an empty seat to be found on the student side of the Student Recreation Center arena. Everyone knew the stakes of the game for the UC Riverside men’s basketball team: win, and you’re in the playoffs. ESPN certainly knew it, as they had their desk, broadcasters, cameras and lights prepared to capture the action. But most importantly, the players knew it, and they never let up, leading from the opening tip to the final buzzer in a win over UC Davis, 78-65, which secured UCR’s spot in the Big West Conference tournament.

Going into the game, both teams had a record of 4-10 in the Big West Conference, but UCR certainly didn’t play to its record. Starting from a Chris Patton post shot in the first 20 seconds of the game, the Highlanders never looked back, leading from start to finish. Back-to-back threes by Steven Jones and Steven Thornton pushed the lead to eight in the first four minutes, and it became clear that it would be a “perfect night for Riverside basketball,” as Coach Cutts put it after the game. That summary describes a majority of the important categories on the night, as UCR was ahead of UC Davis in field goal percentage, free-throw percentage, rebounding, bench points and points in the paint.

“We’re growing. We’re learning,” Cutts acknowledged after the game. “It’s taken us a long time. But I’m happy where we’re at. We talked about being a good team in March, and now we’re 2-0 in March.”

Momentum is important in all sports, especially leading into the playoffs, and Riverside clearly realizes that. Coming off of what Patton called their “best win of the season,” the Highlanders played with intensity that exemplified the growth and maturity the team has experienced this season.

This game might not have been very close, but they definitely finished strong. At about the five-and-a-half-minute mark, Jones managed to get the ball on a fast break and dunk it with authority, pleasing not only the Highlander bench, but the max-capacity crowd as well. The fans showed their support all night, and the players took notice.

Austin Quick, who had a very balanced night with two steals, three assists, five rebounds and five points, claimed that the energy the fans brought sets the pace. “It gets rid of the fatigue factor,” he said. “With all those people out there there’s no time to be tired. It’s always next play, next play, next play. With that energy you can’t even think about being tired.”

The game’s leading scorer and rebounder (20 and nine) Patton felt the same way, admitting, “Coach Cutts sometimes has to get us going. He talks about how we need more juice. But not once the entire day did he have to say that. And before the game I just didn’t see any way that we couldn’t win.”

In a game that seemed completely reverse of their last contest against UC Davis, the UCR men’s basketball team fell behind in the opening seconds and could never catch up, losing 67-74 to the Long Beach State 49ers.

On paper, it would seem to be the obvious result for the game, considering that Long Beach State had already locked up the number three seed in the Big West Conference playoffs while Riverside held only the number eight seat. Long Beach State has also had a history of success in those playoffs, having won the tournament as recently as 2012. The 49ers, however, never could completely shrug off Riverside, resulting in only a seven-point win.

UCR was hoping to carry over some of the momentum that they had created by winning two games in a row, but Long Beach shut them down early. The club shot 25 percent from the field and from three in the first half, while the 49ers shot 51 percent from the field in those same 20 minutes. This discrepancy led to a 7-0 run by LBS late in the first half, extending their lead to 12 at the half, 34-22.

The second half was particularly interesting. Even though the lead reached its highest point at 20 with 3:14 left, UCR was still in a position to win with 30 seconds left. This was due to an impressive defensive effort in that timeframe, resulting in a 13-0 run. Tre Owens, Nick Gruninger and Austin Quick each made a three during the run, with Gruninger and Quick also forcing turnovers to keep the run going. But it was a little too late as Long Beach made enough free throws to hold off the massive comeback, 74-67.

Steven Thornton led the game in scoring with 17 points, while Lucas Devenny led the team in rebounds with 10. Sam Finley continued his consistency at scoring the ball, adding 14 points, and Quick had a good showing off the bench with 16 points and three steals.

The Big West Conference playoffs start this Thursday in Anaheim at 6 p.m., as the UC Riverside Highlanders take on the number one seeded UC Irvine Anteaters. Riverside lost both matches against Irvine during conference play, but has played better basketball as of late. All four quarterfinal games on Thursday will be televised on Prime Ticket and Fox Deportes.