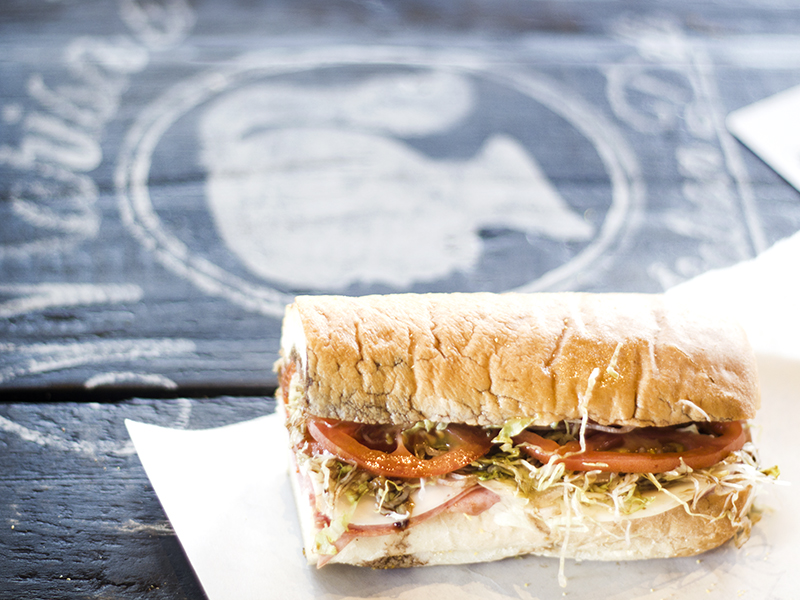 The Canyon Crest Towne Center gains its own piece of Italy with its newest edition of Marisa’s Italian Deli. Embedded within the shopping center, not even the February fog could hide the vines spiraling around the cobblestone entrance underneath a sign of the silhouette of Marisa. Gary Romano (owner of Romano’s Chicago Pizzeria and Canyon Crust) names his 7-week-old deli and cafe after his 10-year-old daughter and pays homage to his Italian roots. Not only does it create subs and “sammiches” good enough for the wise guys, but Marisa’s Italian Deli opens up the  Mangiare Bene: a packed pantry with pastas, chocolates, olives and even nutella for those who need to do some grocery shopping as well as LavAzza Cafe for macchiatos and espresso.

While noticing the patio that transports the guests to the countryside of Florence, the front door releases the aroma of fresh bread to lure people in. The Italiano tour begins with a pastry case in the front corner, filled with tiramisu and bredele — a cookie assortment of anisbredela (cake with egg white and aniseed) butterbredle, schwowebredle (orange and cinnamon), spritzbredle, small pain d’epices and spice cakes that are made with sugar rather than honey.  A bed of meats and cheeses rests beside the cash register, all of which with names that do not easily roll off the tongue. Finocchiona, soppressata, grano padano as well as other tongue twisters are packaged and ready for retail or, for a better deal, to be sliced by the quarter pound.

Above and behind the cutting boards is the chalkboard menu. There are three categories of sandwiches: Specialita’s (small $5.99, large $8.99), Italiano Subarminos (small $5.99, large $8.99) and Sammiches ($8.99 served with a choice of coleslaw, potato salad or pasta salad). A favorite under Specialita’s is the Forget About It (hand gestures go great when ordering this one!) — roast beef, giardiniera, onion, pepe rosso cheese and mayo all toasted on an Italian roll. Another sure shooter is the Tommy Gun, with salami, capocolla, mortadella and pepperoni. The difference between these two categories and Sammiches is that the few choices of sammies are served on your choice of wheat, white or rye sandwich bread while Specialita’s and Submarinos are served only on an Italian roll.

The Yard Bird Italiano Subarmino — capocollo, oven-roasted sundried tomato, turkey, aged provolone with lettuce, tomatoes and their vinegar oil blend — looks the most enticing beyond the popular choices and I couldn’t resist a cannoli to complete to the meal. Guests can wait for their meal in either the few tables pressed against the window, the one long dining table in the center or even relax in the living room set in the back corner that looks like where the Godfather would take care of business.

After 10 minutes of waiting, the name for the sandwich is called. The 6-inch Italian roll (small) is fluffy and dying to be torn to enjoy its buttery and flaky glory by itself. The height of the sub is a bit disappointing, as the hearty meats are sliced into see-through sheets. This specific sandwich is ordered with pickles and adds extra crunch with the vegetables and acidity with the house vinegar oil blend throughout each bite. The sundried tomato turkey is the most surprising flavor as it encompasses a subtle sweet flavor that meshes well with the other components. Shreds of lettuce and two slices of tomatoes are stacked on top of one another in the center of the sandwich with a slice of cheese resting beneath. With no condiments besides the vinegar oil blend, the ends of the sub were dry, leaving the center mound of lettuce soggy — a nitpicky detail but tasty nonetheless. After the first few bites, it feels like biting into a roll with a surprise center rather than a sub sandwich. With the use of quality ingredients, however, the Yard Bird is definitely not a Subway sandwich; however, the quantity of the meal does not do it justice. A Club Sandwich, listed under the Sammiches, is much bigger with multiple folds of meats and cheese. The choice of side is served in a four-ounce cup … again, smaller than predicted with the escalated price.

Not much later did the server bring the cannoli to the table. Custard filling tempted the edges of the deep-fried shell with chocolate chips glued to the ends and powdered sugar dusted over. No mess with these as the filling is so thick and rich, with one bite into the shell, the pieces instantly stick to the center. With the first bite, the custard melts off the tongue and the cinnamon plays with sweet and warm flavors. The shell itself is almost like a waffle cone to vanilla ice cream: perfect pairing! The shell has air pockets on top which makes it very airy and light cut through the richness of the custard to make having just one cannoli a challenge. Guests can choose between old-fashioned cinnamon and cherry filling with either chocolate chips or pistachios as toppings. The best part is definitely the dessert, and finding out Marisa’s Italian Deli plans to expand their bakery is even better.

Underneath big band oldies playing throughout the cafe, the lunchtime rush hustles in. Members from the UCR volleyball team and office clerks get their midday caffeine fix from the LavAzza Cafe menu and take their sandwich to go. The ambiance itself is more memorable than the actual food for the price, but the deli and cafe definitely deserve a second glance to try out the multitude of items.