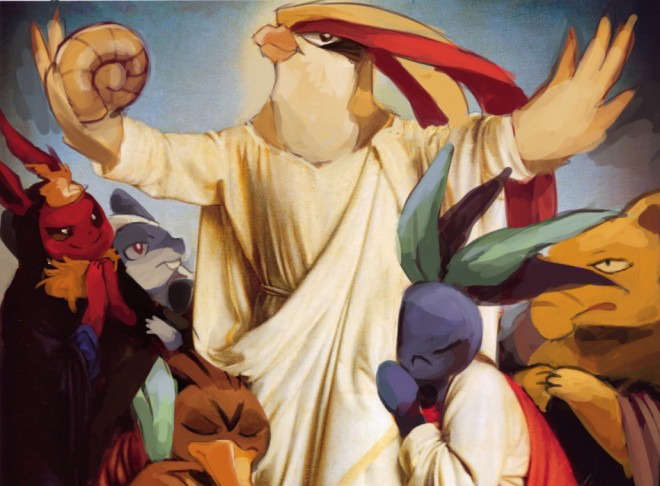 If you’re wondering why you’re seeing helixes all over the Internet, there’s a good chance you’ve been living under a dome-shaped rock.

The plethora of helixes is due to the popularity of Twitch Plays Pokemon, an online site that live-streams a Pokemon game to the masses. As anybody who’s grown up in the late 90s knows, the player controls the main character, Red, on his quest to collect eight badges and become the champion. But instead of having one person handle the controls, this version is different by allowing anyone and everyone to enter commands simultaneously to the player character via chat. The result is a series of spastic movements as Red processes thousands of commands at the same time, wandering in circles, saving his game, checking his inventory, talking to the same person five times and then saving again. Needless to say, ordinarily mundane tasks become complex endeavors and progress is as slow as molasses in the movie “Frozen.”

So why has it racked up over 36 million views, a number that’s just a couple million shy of the state of California’s entire population? How has it had such lasting power, with over one million players sticking around for more than 16 days to complete the game? The PBS Idea Channel has published a six-minute long video discussion about it, there’s a petition on the White House’s website to make a holiday dedicated to the Helix Fossil and it’s got its own Wikipedia page. Even CNN, a stodgy and staid bastion of politics and “hard” news, has found it worth its while to post an article about what the hip kids are doing these days.

There are probably a couple of factors. The first is a sense of nostalgia for the game, and Pokemon, itself. The original games that started it all, Pokemon Red and Blue Versions, were released in the United States in 1998, and in a scant two years, more than 8.6 million copies were sold. It’s hard to overstate how much of a cultural phenomenon it became throughout the U.S. and the world, launching a television series, a card game, a Macy’s Thanksgiving Day balloon, specially designed airplanes and plenty more. If you were growing up in the late 90s, odds are you grew up with Pokemon in some fashion — it was almost impossible not to. The very air seemed saturated with it, and every kid on the playground was talking about Pokemon, whether it was the video game or just the breakfast cereal.

These people, often called Millennials, were born in the late 80s and early 90s and are now coming of age in the world. We are graduating high school, going to college, working jobs and searching for our way in life. It’s a much more complicated world now, and Twitch Plays Pokemon brings back some of that good-old-days nostalgia, when times were simple and all that really mattered was being able to defeat Team Rocket. The fact that Twitch Plays Pokemon takes place on the Internet only amplifies the accessibility to the Millennial generation — unlike some of our generational predecessors, computers and online networking are not foreign concepts to us. Precisely the right combination of circumstances (namely, a high degree of Internet-savvy and yearning for childhood simplicity) coalesced to draw people into the world of Twitch Plays Pokemon.

The nostalgia, however, is just one small reason for the resounding success of Twitch Plays Pokemon. If it were the only factor keeping the playthrough afloat, how is Twitch Plays Pokemon still going strong a week into playing Pokemon Crystal Version? More interestingly, how would you explain the the spontaneous generation of countless memes, Twitter chatter and the creation of its own subreddit page? And why is there a meticulous track record kept of the progress of the game, even after it’s been finished?

Looking at that history reveals the true reason Twitch Plays Pokemon has been so successful: The players created their own mythology and history. It wasn’t something implemented by the creator of the game from the top-down; it was handmade by the players from the ground-up. Most famously, the Helix Fossil, nothing more than a simple item, became a symbol of divine guidance and freedom. Its counterpart, the Dome Fossil, turned into a representation of temptation and authoritarianism that seeks dominance over the righteous Helix Fossil. The game’s players took two ordinary items and created a mythological story of struggle between good and evil.

The same goes for the Pokemon the players travel with. To anybody else, they are bundles of grayish pixels, but Twitch Plays Pokemon devotees give them nicknames, personalities and motivations. Archetypal depictions of members of the player’s team as the messiah, the sufferer and even the devil are just a handful of the characterizations that have organically arisen as the playthrough continued.

To anyone uninitiated, it may seem frivolous and silly — and a lot of it really is. But the mythology that the fans developed provided a reason for them to stay involved and see the game through to the end. In evoking that sense of common purpose, what Twitch Plays Pokemon really did was build a community of people with the same goal.

If that seems far-fetched, just think about what makes a community, well, a community. It really comes down to just one thing: a shared set of beliefs, history or identity. When we identify as Californians, for instance, we identify ourselves as part of a geographic community, one based on location. When we say we are liberal or conservative, we are saying that we are part of a shared ideological community. When we describe ourselves as college students, we are describing our shared aspiration to achieve a degree.

The Twitch Plays Pokemon community is no different. Initially brought together by a common, nostalgic love of Pokemon, people from across the world stayed for the history that the Twitch Plays Pokemon players built. People with other motivations later followed (people desperately desirous of being part of the “in-crowd,” or curious onlookers who just wanted to gawk at the wreckage), but the community as a whole, regardless of each person’s individual motivations or affiliations with a particular ideology or Pokemon, was preserved by a shared history and a shared struggle.

What’s more, the players were able to succeed in spite of many difficulties and the differences between the players themselves. In many ways, the success of Twitch Plays Pokemon is the ultimate feel-good story: A group of people, different in countless ways, comes together around a single common purpose and after much effort and perseverance finally achieves success. In a time of economic uncertainty and political paralysis, where Millennials are adrift in a sea of unknowing and irrevocable change, this message has a particular resonance. It is that optimistic desire to believe that success, despite all odds, is possible that pushed the players through to the end, and what makes Twitch Plays Pokemon so compelling. Guided, of course, by the almighty Helix Fossil.