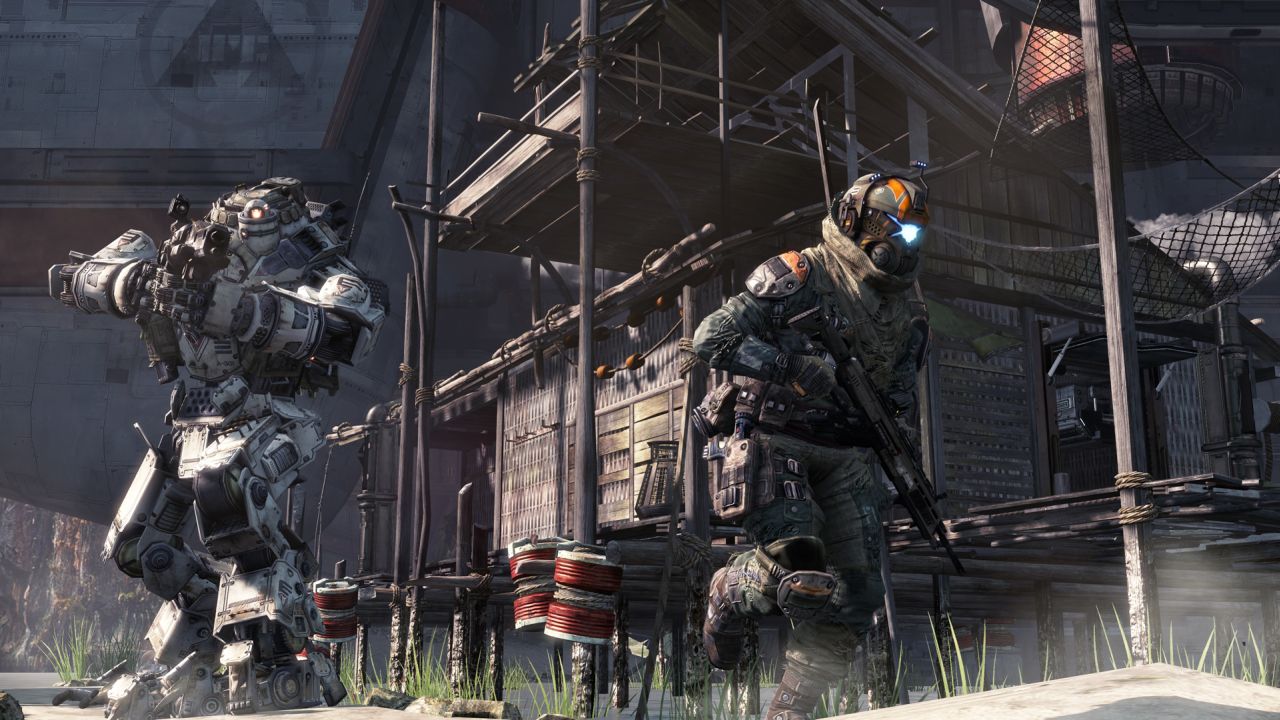 Ever since it was announced, “Titanfall” has been hyped as the next big step in gaming. If you’ve been living under a rock, “Titanfall” is an online-only, competitive, futuristic first-person shooter (FPS) exclusive to Xbox consoles and PC. However, describing it in such a simple manner is doing the game some disservice. The main appeal — and what sets it apart from other first-person shooters like “Call of Duty” — is the ability to summon giant robots called Titans onto the battlefield, combining trigger-happy shooters and mech-combat into every match. “Titanfall” was supposed to be the first step into the next generation of gaming, but did it live up to its titanic hype? Not so surprisingly, the answer is somewhere in the middle.

The story, or what little there is of it, is that you are a Titan pilot in a war that is being waged between two opposing sides. The campaign is definitely lacking, but this game is geared toward online-only play, so it’s not a big deal — especially since the core gameplay is solid. If you have played a “Call of Duty” game or any other recent first-person shooter, the controls will be very familiar — so much so that the button layout is actually the same as most popular shooters. Even typical game types are present, like team deathmatch and domination, respectively named Attrition and Hardpoint. At first, it is actually kind of disappointing that the game feels like a generic shooter, especially when it was made out to be the future of the FPS genre. Of course, the familiar button layout will make for an easy transition for people trying to get into the game, therefore lowering the bar of entry.

What really matters is the addition of verticality to the gameplay. Every pilot comes equipped with a jetpack and a jump kit, which allows the player to not only double-jump but also wall run. Crazy does not begin to describe how fun this makes moving around the map. You can make some huge leaps between buildings, which really allows you to be creative. These additions also add some really insane moments in face-to-face firefights. One moment I was sitting in a room trying to capture an objective, when suddenly, a guy ran into the room, so I started running on the walls to find a way out. Something like that is not possible in any other shooter. There are also burn cards you earn after matches that will give you a temporary ability, like a juiced-up weapon that does extra damage, double experience points or even the ability to move faster. You can activate a card any time you are spawning, but once you die, it is gone forever. They can be very useful and are not too overpowering since they are only usable once.

The weapon choices in the game will not blow you away, but there are some hidden gems in there. The smart pistol will automatically lock on to enemies, and if done correctly, can take them down in one shot. Of course, in order to keep things fair, it takes a couple of seconds for the weapon to lock on. Other than that, your typical SMG, sniper and shotgun get the job done.

If these new mechanics were all there were to the game, it would still be pretty good, but the game gets even better. “Prepare for Titanfall” — such a simple line, yet hearing it becomes addictive. In every match you get to call in your Titan, one of the giant mechs that grace the cover of the game. It takes about two minutes into every match for the Titan to be prepared, but once that time hits, everyone has the ability to call in their mech. These mechs are big, powerful and surprisingly nimble. Now, there are a few things you can do: Get into the mech and control it, have it guard an area in auto-pilot or have it follow you around the map. Each Titan has a couple of customizable powerups. There are things like electric gas that damages any enemy engulfed in it, a shield that allows you to block and ricochet incoming bullets from enemies and even a powerup that allows your mech to become a giant bomb when it gets destroyed (referred to as “being doomed”).

Even if your mech gets destroyed, you can call in more during a match depending on cool-down times. The choices you make between abilities usually decides the outcome of battles with other Titans. Unfortunately, there are only three different Titans, but there are plenty of weapon choices that can be adapted to your gameplay style.

As powerful as these giants are, the game is so well-balanced that having one out doesn’t always mean an automatic win. Every pilot has an anti-Titan weapon that does some heavy damage, and as a pilot you can also cloak yourself (one of few powerups you can use), which allows you to run circles around Titans without ever being detected. Maybe you want to get up close and personal — how about going rodeo style? As a pilot, you can jump on enemy Titans and start to shoot at their core, doing some heavy damage and forcing the pilot to jump out of their mech to try to get you off. There are so many different ways that you can approach these sorts of fights, and it really comes down to how creative you are. One strategy I used was forcing the pilot to jump out of his Titan, leaving his mech unattended. I called my Titan and dropped it right on top of his, leaving nothing but the metal remains of what once was my opponent’s mech.

The game is an absolute blast to play and really pushes the genre forward, so it is baffling to see some of the downsides to the game. First is the campaign — or rather, the joke of a thing they call a campaign. This mode is just a series of online matches that are a mixture of team deathmatch or domination. Before the match, a voiceover tries to tell you what is going on and give the matches some sort of false objective, like saying you must capture an oil rig — but in reality, after completing the “campaign” I couldn’t tell you what was going on. All you need to know is there are two different factions waging war for who knows what reason. Yes, you play this with other people, so it literally is just an online match.

Then there are the generic game types. There are only five game types: Hardpoint, Capture the Flag, Attrition, Pilot Hunter and Last Titan Standing. For an online-only game, that is very few and not enough to keep everyone interested. The only one that’s different is Last Titan Standing, in which everyone starts in a Titan and you do not respawn if you die. Every match is also limited to six players versus six, which has a tendency of making the game feel small. To counter this, there are bots and grunts that make the matches feel fuller, but they are pretty useless and easy to take down. There was also some very noticeable screen tearing on the Xbox One version, making the game look a bit ugly at times.

“Titanfall” was hyped up to be the best thing since sliced bread, and despite it being a blast to play, there are some shortcomings. How long will you be motivated to play with the limited game types, its familiar control scheme and small player count? That is for you to decide, but there is plenty of fun to be had here. Fortunately, it does push the genre forward with its addition of verticality and mech combat. So, no, it is not the best thing since sliced bread, but it proves that slicing bread would probably be a lot more fun with a giant mech doing it for you.