Highlander
Home Radar A day to Self Help 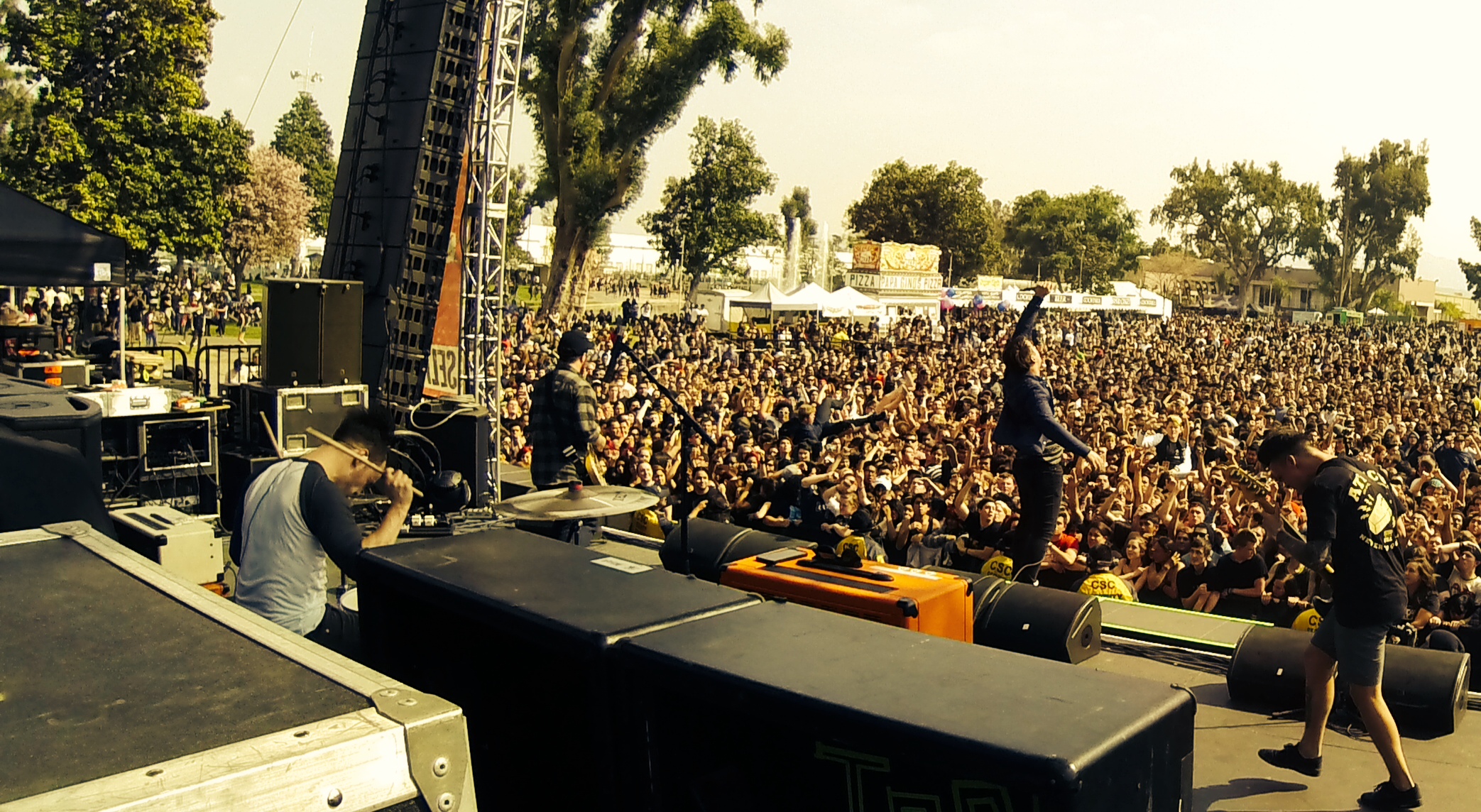 2,000 lined up. Three blocks of people tightly packed into an assembled line outside of the National Orange Show Event Center. Bands from all over the world, fans from all over Southern California and a hot, desolate, Inland Empire city waiting to be rocked by the musicians on stage. March 21 was the day the Self Help Festival came to San Bernardino, CA.

This hot March day offered a lot of potential for an epic live show, something everyone in attendance could feel as they stood in line and listened to opening bands rip guitar chords, bang drums and scream for all to hear. The Self Help festival was not only special because of the bands that came to perform, but because it established itself as a benefactor to many young adolescents who suffer emotionally and physically. One of the bands that played an integral role in the development of this festival was A Day to Remember. Their intent was simple: to raise money and awareness for individuals directly affected by emotional disorders.

For many young adults, specifically college students, emotional disorders are prevalent. This festival is a musical experience that acknowledges the emotional distress so many young adults endure on a consistent basis. The Self Help Festival offers a day that is, as stated by lead singer of A Skylit Drive Michael Jagmin, “unforgettable, because we care about you!” It’s not corny or cliche when it holds truth. By reaching out to their audience and increasing awareness, bands such as Memphis May Fire, Beartooth, A Day to Remember and Of Mice and Men solidify the idea that they each truly do care for their fans.

Creating a musical experience that emulates common emotional stresses ultimately creates fan loyalty to this genre of music because it allows the listener to connect on a deeper level. When we go to festivals, we want to be able to experience the real version of the songs we love so dearly. Self Help Festival brought these lyrics and bands to life. The Self Help Festival changed my impression of the “hardcore” or “metal” scene. It shed light on the variety of people who listen to this music and are able to identify with lyrics on a much deeper level of understanding.

Throughout the entire festival bands rushed the stage to begin their set as the roar of the crowd deafened all in attendance. The artists were welcomed to the stage by hectic movement and constant crowd surfing, something that almost all lead singers immediately instigated once they grabbed the microphone. No matter the band, the members of the audience seemed to know every word to every song. The level of commitment to the words could be seen through the audience’s passion in their screaming of the lyrics.

The Orange County-based band Stick to Your Guns is known for its brutal uptake, fast guitar ballets and inspirational lyrics, and its performance prompted complete chaos in the crowds; hundreds of people formed to mosh in time with the music. Throughout the entire set, individuals crowd surfed to the front of the sea of attendees, and as they reached the front they reached out their hands toward the lead singer, hoping to grasp his hand for a split second. This passion, and to some, craziness, is truly the representation of these shows. The level of hectic activity and rogue, yet structured audiences fighting among each other was something I had never seen at a music festival. To me, this truly showed the passion these young fans have for their music and the lyrics that make them up.

The overall vibe of the day was incredible. The scene was a classic California spring day. There were stations selling water and beer, keeping students and adults happy and hydrated, and of course sunglasses and suntan lotion to make it all come together. In the middle of the delicious offerings, the hot dog line stood prominent as it was almost as long as the line to enter the venue. Having chosen to wait in this line, I can personally validate the delicious culinary outcome that eventually came from our patience.

In addition to the countless food and drink options, there were friends and familiar faces to interact with. Many UC Riverside students attended the festival to enjoy a festive Saturday full of good music and even better company. Walking through the crowd and seeing friends from campus became more of an expectation than a surprise, and eventually would be the precursor to an incredible day and night of entertainment with fellow Highlanders.

One of the bands who hold a place in this category of entertainers was Red Bull Records’ artist Beartooth. Many of you may be familiar with the lead singer of Beartooth, Caleb Shomo, who has been a prominent name and vocalist in the metal and hardcore industry for almost a decade now. Shomo’s ability to fluctuate in sound, whether at high or low pitch, is unmatched. Red Bull Records arranged for me to meet and interview Shomo regarding the importance of the Self Help Festival, what it means to these young adults and how Beartooth’s music relates and guides those who suffer from emotional disorders.

During the interview we discussed the struggles that Shomo faced in his life and how his band’s most recent EP, “SICK,” is a portrayal of these emotional hardships. Shomo said he thought the “Self Help Festival was cool because it helped people who struggle,” similar to himself. “Today’s performance was more than average, it really was special for me because it was special for them (the audience).” Shomo’s comments about Beartooth’s Self Help performance were genuine as he talked about the ways “he was able to inspire” these young adults his age.

For Shomo, his musical aspirations consist of more than simply recording and performing songs. It’s about “self-motivation, knowing that I want to write these songs by myself and for myself. My own mental well-being is the absolute driving force.”

The “driving force” that Shomo referenced represents the way his self-motivation toward creating music provides hope for those who listen to Beartooth’s music. Hardcore — or as Shomo refers to it, “loud noises” — is something larger than those who create it.

This festival was incredible because of the intent and the value of those in attendance. These bands at Self Help Festival showed up to perform, to make a difference in the lives of young adults and to give those individuals an unforgettable experience that will affect them in a longstanding and positive way.