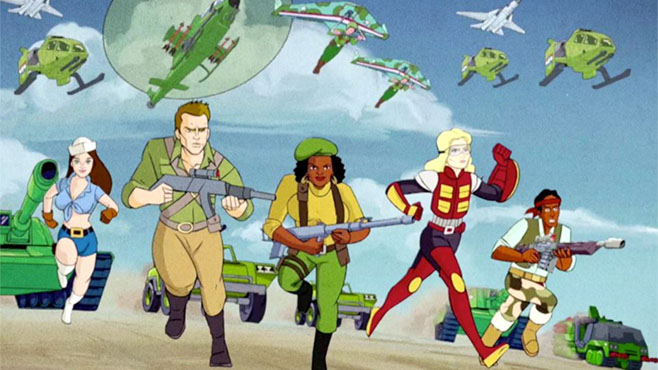 Going into “G.I. Jeff” this week, I wasn’t really sure what to expect. Pictures had been circling the Internet of the characters in their G.I. Joe forms, but that didn’t mean much to me. I’ve never seen the G.I. Joe cartoon (or even the recent movies for that matter), and I hoped the episode wouldn’t hinge too much on that premise.

While “G.I. Jeff” does, in fact, lean heavily on its G.I. Joe premise, that didn’t detract from the episode. I was worried about too many inside jokes, but while there are probably some that I missed, on the whole “G.I. Jeff” parodies a whole generation of cartoons and can be applied to action movies in general as well.

The ostensible main plot of the episode revolves around the fact that Jeff (aka Wingman) kills a member of Cobra, the enemy of the G.I. Joes. No one thought the Cobras could be killed, or at least, the G.I. Joes and the Cobras had a truce to never actually kill each other but to only shoot at the other until they went away. Here is where I saw the connection to action movies — with characters shooting at each other but never scoring any hits.

The death shakes up both sides of the cartoon, but on the G.I. Joes side, Jeff and his team — Annie (as Tight Ship), Britta (as Buzzkill), and Shirley (as Three Kids) — are jailed. They meet Abed (as Fourth Wall) in jail, and he tells them of a place called Greendale.

As you might expect from “Community” in general or from Abed’s character being named Fourth Wall, this becomes a meta reference — well, sort of. It doesn’t reference “Community” itself, but it still breaks the fourth wall by telling Jeff and his team that there is a higher reality that they need to get to — Greendale.

What makes this interesting is Jeff’s reaction to it — he faints and enters a children’s TV commercial. Abed says he must have a connection to the other reality, and Greendale somehow triggered it. This meta-narrative is part of what makes the episode work for me, even as a non-G.I. Joe watching viewer. Of course, I’m a big fan of meta-anything, but it helps that we’re not meant to take the G.I. Joe world too seriously.

Ultimately, the story is about leaving the G.I. Joe world behind — on both a physical and emotional level. As Jeff/Wingman realizes, he’s dreaming or delusional, the G.I. Joe world isn’t real, and the real Jeff Winger is in the hospital after drinking alcohol and taking some pills. No, he didn’t try to commit suicide, which is good because I’m not sure I would believe Jeff would do that.

Part of this, I’m sure, comes from the fact that we only have a 13-episode season. In a full season, we probably would have gotten more episodes in the normal Greendale world to balance out all the high-concept episodes we’ve been getting.

What the short episode order and the new characters — Hickey and to a certain extent, Duncan — mean, however, is that we haven’t gotten a chance to spend as much time with Jeff and with the other former study group members as we should have to make this moment poignant.

While Jeff’s admission that he wants to continue being a child hits home for me, it would have been even better if we could have seen this change coming in Jeff, especially if it’s to the point where he needs to be hospitalized.

The episode was a fun one, and I suppose in a 13-episode season of a comedy, that’s a good thing. But like with the rest of the season, taking a step back from the fun, wacky side of Greendale and coming to terms with the heart would help immensely. We’ll have to see if the season finale can come through.