Highlander
Home Radar “Goat Simulator” asks: How much will you pay for a good laugh? 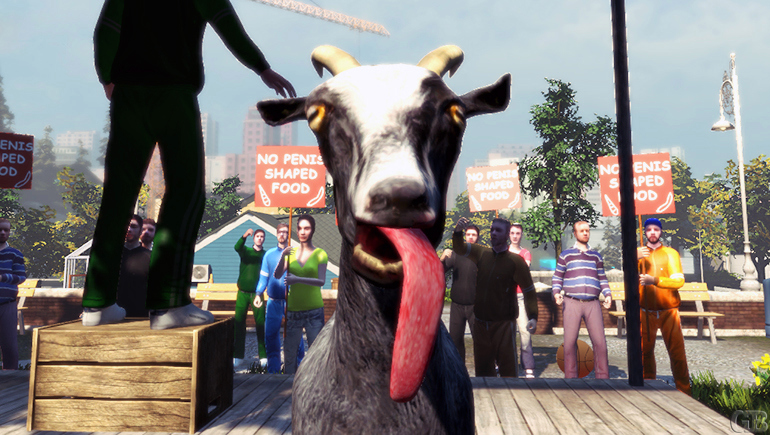 “Simulation” is a scary word to a good portion of the video game community. Hearing or reading it, some people instantly conjure images of the annually rehashed “Farming Simulator” series or any number of games about trucking across the country or settling in Oregon. Onto this scene come the irreverent games of simulation like “Kerbal Space Program,” “Surgeon Simulator” and “Viscera Cleanup Detail” — all of which are determined to replace old ideas of what it means to simulate reality by simulating absurd fantasies. The latest of these surreal games is “Goat Simulator,” the most recent game from Swedish developers Coffee Stain Studios.

Right at boot-up, it’s easy to tell whether you’re going to end up enjoying “Goat Simulator” or not. The controls match the rest of the game in that they feel broken, and at times entirely unresponsive. While this is normally a deal-breaker for other games, it feels entirely intentional for “Goat Simulator,” reflecting the developers’ bullet points on the key features section of the Steam page, which says, “MILLIONS OF BUGS! We’re only eliminating the crash-bugs, everything else is hilarious and we’re keeping it.” If you don’t like the idea of playing a game where enjoyment is derived from bad physics and constant in-game glitches, then you won’t like this.

The plot to “Goat Simulator” is simple: You are a goat in a small sandbox world — now go crazy and have fun. Fortunately, this plot falls apart quicker than the fence penning you in at the beginning of the game and you’re left to your own devices to make of the situation what you will. As a goat, you do normal goat things like move around, headbutt, lick things, ragdoll and slow down time, all of which are necessary to destroy the environment and get scores for a variety of creative combos.

Coffee Stain Studios definitely had a sense of humor when making the game, as many of the hidden or hard-to-reach sections of the game are genuinely hilarious, prompting your goat to take actions such as sacrificing people to the goat devil, or assuming the goat throne to summon peasants from the sky. As fun as these little jokes are, however, it’s also easy to discover everything the game has to offer within a few hours due to the small size of the map. While this could deter many from the game, there is also connectivity to Steam Workshop through “Goat Simulator,” enabling a huge variety of mods and maps to be made by people who own the game — and allowing anyone who buys it to expect at least a few more hours of play than what they had originally payed for.

At $10.00 on Steam, this game is slightly expensive for what it is: a joke using physics and glitches. However, given the game’s inevitable expansion through the Steam Workshop, there are limitless possibilities as to what “Goat Simulator” might become in the future. If you’ve got the cash to spare and a few hours to kill, this is a great way to entertain yourself and even some friends. If you don’t find the premise funny or interesting though, give this one a pass in favor of something with better mechanics.