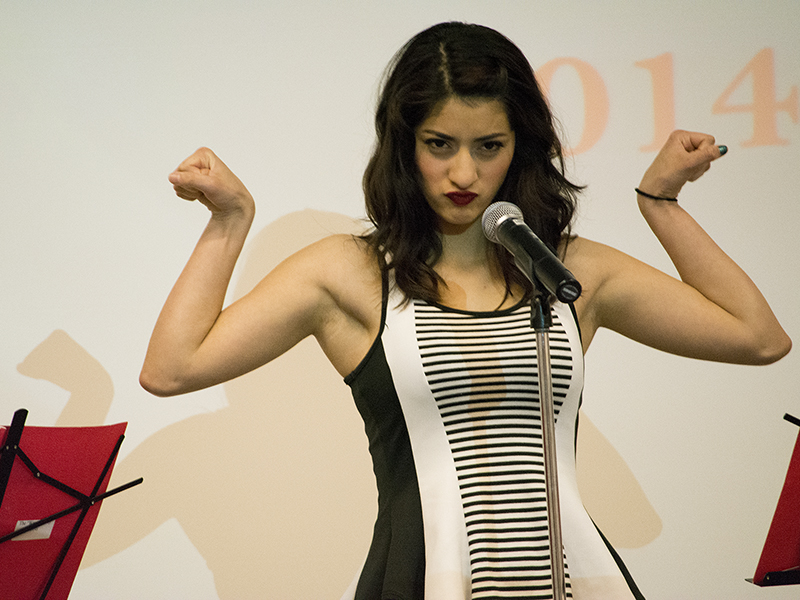 As a male, I did not really know what I was walking into when I entered “The Vagina Monologues,” or whether I would even be able to relate to what was going on. And as the title suggests, the vagina was the focus of pretty much every story — at least, on the surface.

Violence against women is a reality that everyone wants to ignore, though the danger is real. Whether it is through spousal abuse or the reality that is rape, violence against women is not as uncommon as we might like to believe, and in a world where the male always seems to sit at the top of the food chain, it is important to open our minds to the horrors that occur daily. Our diverse campus asks us to think critically every day, so it is only fitting that “The Vagina Monologues” made its way to our campus. This episodic play by Eve Ensler gives different stories from different women all relating back to the vagina. The point of the play is to bring awareness to the issue of violence and oppression against women.

While a lot of the stories dealt with serious issues, it did not take itself too seriously. Plenty of the stories left the audience in stitches — for instance, one of the stories, “The Flood,” was about an older lady speaking about not visiting her “downstairs” in forever because, when she was younger, “the flood” would unleash when she got too excited. Once, she accidentally “flooded” on a boy’s car seat, so she did her best to not allow that to happen again. It was a funny tale, but the important thing to take away as an audience member is that no one ever told her it was very natural, and she should not see her body’s reaction in such a negative way.

One of the stories that stuck with me was the one about witnessing a birth. The story focused on the sacrifice the vagina makes; after birth, it is wrecked, bruised and bloodied, a perspective which gave me a new way of looking at the beauty of birth. The other stories were about accepting the vagina, pointing out how women have nowhere to go to ask questions about it. For example, “The Vagina Workshop,” starring Connie Cheng, told the story of a woman who knew nothing of her own vagina until she went to a workshop. There is also the story of “The Little Coochie Snorcher That Could,” which told the tale of a girl who was made to believe that her vagina was something to be ashamed of, but eventually learned to love it with the help of an older, more experienced woman. Through episodes such as these, the play pointed out that women should not be so scared to reach out to someone to help them understand their bodies — and also showed that they are not alone.

Not every story was humorous, however. One of the more moving narratives, entitled “My Vagina Was My Village,” had a much darker tone as it spoke about the rape and female genital mutilation that still occurs all over the world. The two women, Judith Osorio and Meredith Osias, gave a powerful performance that silenced the room and brought some to tears. And even though I pretend to be knowledgeable of global goings-on, I was completely shocked at some of the gruesome things that go unchecked in parts of the world — such as the slicing of the clitoris and complete mutilation of other parts of the vagina.

According to the statistics given out during the play, one billion women on the planet have been violated. What have we done recently to prevent that? That is the importance of having “The Vagina Monologues” on our campus. You can’t help prevent something if you aren’t informed about it, so that is always the first step: awareness. And on that note, it was great that all of the funds raised from ticket sales went toward the V-Day organization, helping to end violence against women.

Walking out of HUB 302, I felt more aware and comfortable with the idea of talking about the vagina. The play opened my eyes to the prevalence of violence against women, and made me feel more sensitive to the subject. Hopefully more people get to experience this wonderful play so that, slowly but surely, its message is talked about — and so fewer women have to suffer.