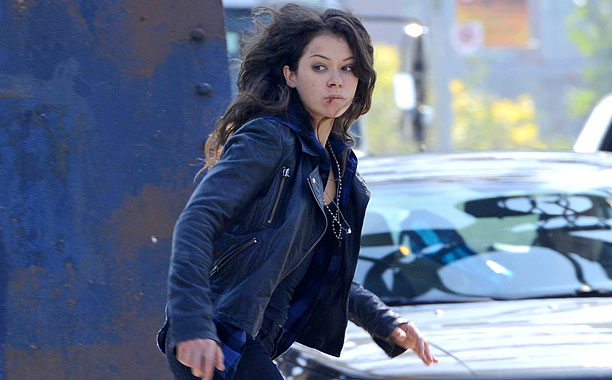 Canadian show “Orphan Black” had a fabulous freshman season, garnering award nominations and wins in both the U.S. and Canada. This included a Golden Globe nomination for lead actress Tatiana Maslany, which I was excited about because genre shows — in this case, science fiction — so rarely get nominated for what are considered the “prestigious” awards.

But as any good television viewer knows, the success of a show is largely defined by how good its current season is. Luckily, the second season of “Orphan Black” looks like it’s only going to continue building on its initial successes.

“Nature Under Constraint and Vexed” picks up pretty much directly after the end of season one. The members of Clone Club — Sarah, Alison and Cosima (all played by Tatiana Maslany) — each have their own problems to deal with. Sarah’s daughter, Kira, has been kidnapped, Alison must deal with the aftermath of her neighbor Aynsley’s death — a death she caused — and Cosima is coughing up blood, like Katya, yet another clone, before her.

The most immediately dire of these circumstances is, of course, Sarah’s predicament, and for this reason, as well as the fact that she’s still ostensibly the main character, we start “Nature Under Constraint and Vexed” with Sarah.

Sarah’s main concern, as is only right, is getting Kira (and Mrs. S, Sarah’s foster mother and Kira’s caretaker) back safely. On the run from both the police and the people from the Dyad Institute, however, Sarah seems to be in a tight spot. But we know that she’s been in tight spots before, and she always manages to wriggle out of them.

She does just that with aplomb in this episode, leading the Dyad people — largely represented by new enemy Daniel (Matthew Bennett) — on several wild goose chases. The best of these is when he accidentally tries to take Alison instead, and she beats up on a couple of his guys before they get her in the van.

In the end, Sarah gets a meeting with Dyad leader Rachel (also played by Maslany) by posing as Cosima and sneaking into the Dyad offices. It’s always a special treat when Maslany gets to play a clone playing another clone, and her scenes are no exception, particularly since she runs into Delphine (Evelyne Brochu) and must briefly pretend to be her girlfriend.

It’s nice to see Rachel come across as the potential bad guy this season. While last season was more concerned with Dr. Leekie (Matt Frewer) and his possible role in the cloning process, Rachel takes an active role this episode and demonstrates the clout she has over Leekie. It may be more work for Maslany, but ultimately, it’s more fun for the audience to see the clones playing off each other.

Unfortunately for Sarah, Rachel doesn’t have Kira, but I’d say this is fortunate for the audience because Rachel proposes an alliance to get Kira back. Of course, Sarah doesn’t accept the offer, but with the reveal that the Proletheans — the religious extremists who raised Helena (also played by Maslany) — took Kira, it seems likely to me that at some point Sarah may have to take Rachel up on her offer.

Alison and Cosima don’t have nearly as much to do as Sarah in this episode, which is a little disappointing, but now that some of the immediacy has gone out of the Kira plotline, we’ll probably delve deeper into Alison’s and Cosima’s problems in future episodes.

Cosima in particular doesn’t get much additional plot in the episode. She’s still sick, still considering Leekie’s job offer and still in love with Delphine. These plotlines deepen as Cosima tries to figure out her malady by herself, and Delphine gives a blood sample to Leekie anyway, but there’s not a lot of room for Cosima’s problems with Sarah on the warpath.

I’m both excited and worried that Delphine is still in league with Leekie. As per usual on this show, it’s hard to tell where exactly Delphine’s loyalties lie — a trend that also exists with both Paul (Dylan Bruce) and Art (Kevin Hanchard) on Sarah’s side of the plot. Why exactly does Delphine give Leekie Cosima’s blood sample when Cosima asked her not to? Is she more concerned about her assignment as Cosima’s monitor, or about Cosima’s life? I look forward to having these questions answered as the season progresses.

For her part, Alison is still in the suburbs. In season one, Alison was typically the one least invested in the plot each week, but with her part in Aynsley’s death, I’m hoping that changes this season.

Alison gets a lot of great moments in the episode in her typical role of suburban soccer mom. She’s now the lead in a community theatre musical production (possibly about cleaning, murder and asthma) but she continues to expand beyond this role, as we saw last season with the trip to the gun range.

While Alison may be able to throw herself into her theatre work and casually ask her drug and gun dealer about his mother for now, the preview for next week shows Alison falling apart due to her guilt over Aynsley’s death. Being a clone has seriously affected Alison’s home life, and I can’t wait for the clone world to mix up Alison’s home world further, particularly since police officers Art and Angie (Inga Cadranel) have Alison under surveillance and could find out about the murder at any time.

Finally, for those of you concerned after the season one finale, Helena is indeed back. At the very end of the episode, she stumbles into a hospital, wounded but alive, and there was a collective sigh of relief across the Internet.

While I wasn’t particularly surprised by this twist, even if the cast and crew kept saying Helena was gone for good, I am among those excited about Helena’s return. The relationship between her and Sarah was one of the most interesting parts of the show in season one since it was both such a close relationship and such a distant one, and with Helena alive, that relationship can be explored further.

I doubt Helena will be happy about the Proletheans kidnapping Kira, and if Sarah and Rachel don’t team up, I hope Helena and Sarah will. Better yet, let’s have all three of them work on getting Kira back together. That would be a deliciously entangled web of motives.

But whatever we have to look forward to as season two of “Orphan Black” continues, if it’s anywhere near as good as “Nature Under Constraint and Vexed,” we’re in for one hell of a ride.