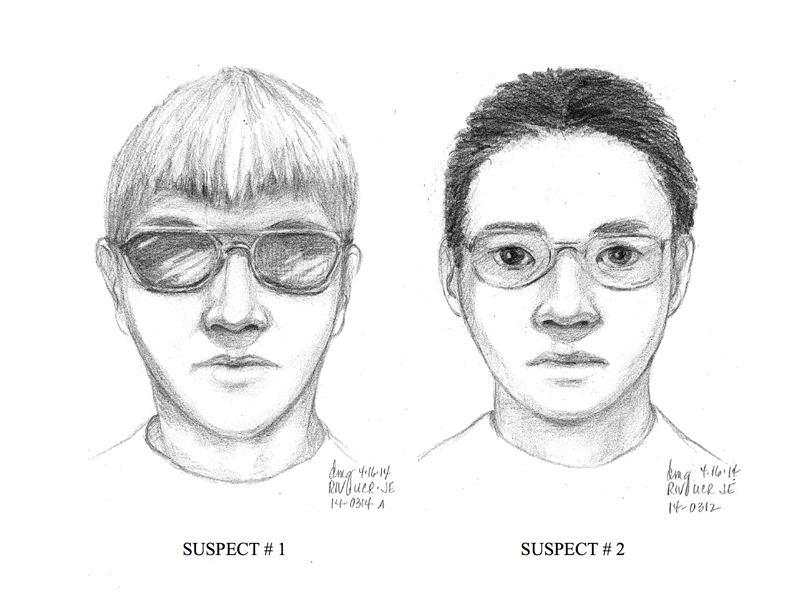 Two female students were victims of possible attempted abductions that occurred on the evening of Saturday, April 12, near Big Springs Road. UCPD detectives, receiving descriptions from the victims, released sketches of the alleged assailants, in hopes of receiving more information from the public.

On the night of the incident, police responded to a call from a female student reportedly being chased by a man near the Lothian Residence Hall. The student said that she was walking near the residence hall at about 7:30 p.m., when she saw a silver four-door sedan blocking the sidewalk path. She continued to walk east toward the residence hall and then saw the driver’s side door open. A male stepped out of the car, ran toward her and got close enough to touch her as she fled the scene. The male then proceeded to run back to his car and drive away.

In the sketch, he was described as a white adult male in his mid 20s, with a height of about 5-foot-8-inches to 5-foot-10 inches tall, a thin “fit” build and short, straight, dirty blond hair. He was last seen wearing dark black sunglasses, a white T-shirt with a logo in front and gray-colored jeans.

Another female student reported that earlier in the evening at about 6:30 p.m., she was walking up the pathway near Big Springs Road that led to Lothian Residence Hall when she noticed a silver vehicle parked next to the pathway. As she walked up the pathway, the driver stepped out of the car to get something from the trunk. When she looked back, the driver was right behind her, holding a folded blue bandana with patterns on it. Fearing that the man was getting ready to place the bandana over her head, the female student threw a drink at the suspect and proceeded to run. The suspect then stepped into his car and drove away.

The sketch describes him as an Asian adult male, 20 to 30 years old of age, with a possible height of 5-foot-6-inches, black hair and was last seen wearing a white T-shirt and eyeglasses.

UCPD has asked students to be alert of their surroundings throughout their search, while UCR administrators have contacted the female students involved in the incident with offers of counseling and other academic accommodations.

“Generally speaking, administration always wants students to be safe,” said Kris Lovekin, UCR Director of Media Relations. “The Office of Student Affairs reaches out to students involved in such incidents to try to help them with what they need, whether it’s counseling or working with professors for accommodations.”

Additionally, Romanie Arterberry, the staff advisor of the Campus Safety Task Escort Service (CSES), said that escort usage rises when a crime occurs near campus. She believes that students should be using safety services all the time as a precaution when walking around campus at night.

“Students tend to be reactive when crime incidents occur near campus. In terms of safety, we need to be there,” she said. “But they need to utilize these services all the time, not just when something happens.”

To third-year history law and society major Cyndi Lopez, electronics varying from cell phones to headphones may distract a person, leaving them vulnerable to assault. “I’ve had classes where I come out at around 9:30 p.m. and I see girls with their phones out,” she said. “I don’t do that. Why do we have to have our iPhone out? There’s no use for it.”