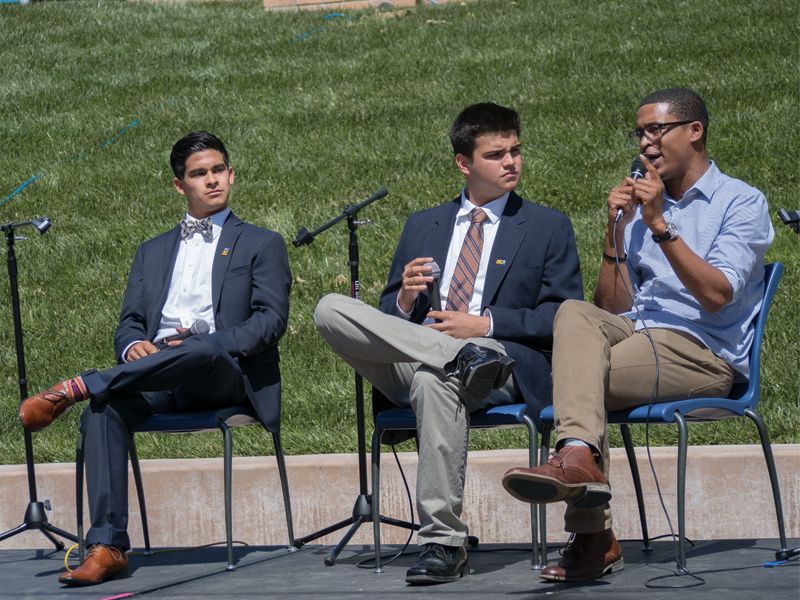 With nearly 50 senatorial candidates running in the upcoming elections, independents and a handful of members from each political party — [YOUR]SIDE, ABC: A Better Choice and Vox Populi — spoke during last Monday’s debates. Torn posters from each ASUCR political party became a topic of contention, when ABC party member and senatorial candidate Ben Roden called out [YOUR]SIDE president Nafi Karim, demanding an apology for comments that he allegedly made on Facebook.

Bourns College of Engineering (BCOE) candidates Ben Roden of ABC, Jason Ramirez of [YOUR]SIDE and Johny Nguyen of Vox Populi took to the stage. There are a total of five potential candidates, but only two available BCOE seats on the senate.

Roden said he was “fed up with party politics” and shifted the discussion to the incident where ASUCR political party posters were found torn down. In response to his demands, [YOUR]SIDE members from the crowd initiated a chant: “Whose side? [YOUR]SIDE.”

Commenting on a picture of ripped party posters on Facebook, Karim described the incident as “not acceptable,” calling upon fellow candidates and party members to continue running a clean campaign. “I am not pointing fingers nor looking for any explanations, but rather asking (presidential nominees Armando Saldana and Sean Fahmian) both to lead (their parties) and supporters to prevent further destructions,” Karim said, addressing his comments to presidential candidates Sean Fahmian and Armando Saldana. “Let’s all be vigilant and not allow this to happen again. Before we can lead the school, we must be responsible enough to lead our own.”

Highlander newspaper’s Editor-in-Chief Michael Rios posed two questions about increasing the college’s poor retention rates and closing the rising gender gap in BCOE, but Roden continued to speak of the ripped posters. Turning to the right of his adversaries, Roden asked, “Do you support my stance?” to which both answered, “No comment.” Rios later reminded the candidates not to pursue any form of negative campaigning.

When asked if Roden’s statements constituted as negative campaigning, Elections Director Chris Sanchez later told the Highlander that the judicial branch can determine whether or not actions filed by individuals constitute as a violation of the Elections Code. He continued to explain that the justices can only make that determination if someone files a case of negative campaigning against Roden. “(The justices) do not actively seek out to enforce the code,” furthered Sanchez.

Sanchez also warned that if the tearing down of posters continued, then the privilege of putting posters up at the HUB and around campus will be rescinded for all political parties.

Later in the debate, Ramirez, standing on the platform of [YOUR]SIDE, said that he seeks to expand the undergraduate research program by creating a “meet your professors” event, where students will spend time outside of the classroom, getting to know their professors.

Three CNAS nominees — Pricilla Perey of [YOUR]SIDE, Sylvia Abdulnour of ABC and Ken Wang, one of only two CNAS candidates running as an independent — debated over issues of increasing supplementary instruction sessions, limited academic advisers and the role of a CNAS senator. There are a total of 14 CNAS candidates, but only four available spots on the senate.

CHASS candidates Akeem Brown of ABC, Alex Dale of Vox Populi and Alexander Mastache of [YOUR]SIDE later voiced their concerns about campus demographics that they felt were most underrepresented. There are a total of 29 candidates running for a CHASS senatorial position, but only 10 seats are available in the senate.

Brown, holding firm to his seven-year experience as a corporate paralegal, desired to represent transfers, commuters and student parents. Dale wanted to serve as a voice for his college and emphasized the need to create unity between the Greek fraternities on campus.

UCR students may only vote for senators in each of their respective colleges during the ASUCR elections, which will take place from April 21-25.