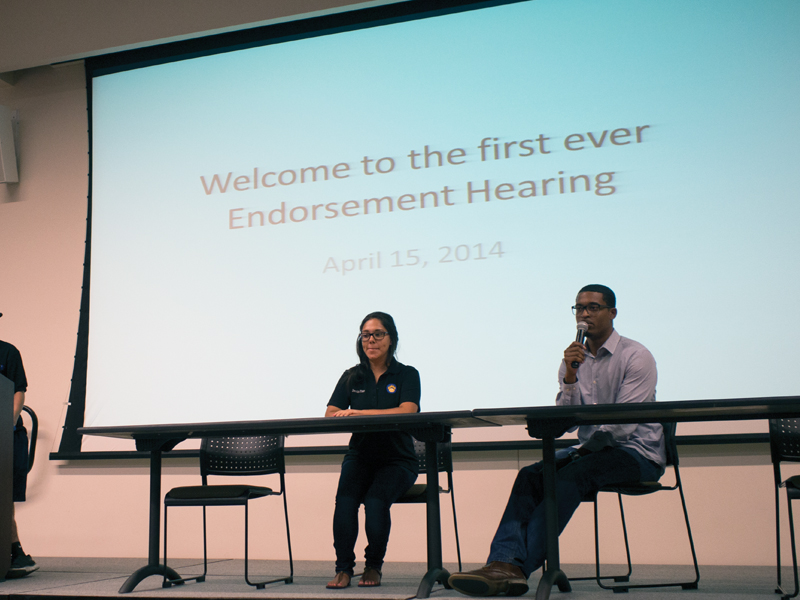 On April 15, members from the political parties ABC: A Better Choice and [YOUR]SIDE held a candidate endorsement hearing to drum up support from individual students and student organizations in the galley. ASUCR senator Tin Dinh served as master of ceremonies for the event and set the ground rules for how the information session and Q-and-A portion would be conducted. With a 40-minute late start, candidates were noticeably absent from both parties due to scheduling conflicts, and the third political party, Vox Populi, did not attend.

A support group for staff, faculty or students with children, R’Kids, asked the ASUCR candidates how they would make the campus safer for students and their families. [YOUR]SIDE presidential nominee Nafi Karim spoke about his work with the city to decrease crime rates by installing lights on Rustin Avenue and Linden Street. Seeking to further the project, Karim hopes to introduce a visible and lighted gate on the street to discourage criminal activity.

Another notable question came from members of the Interfraternity Council — an organization that oversees the general welfare of all member fraternities — which asked the candidates about the legacies that they would like to leave behind. ABC presidential candidate Sean Fahmian alluded to the housing ordinances that affected students earlier this year and his envisioned solution to bring Greek housing or student organization housing onto the campus. “I think that would be a great legacy for ASUCR to leave and an example of the students coming together and really achieving something for the students,” said Fahmian.

Voting takes place this week starting April 21-25. UCR students can vote at several different places on campus including central campus polling stations at the Bell Tower from 10 a.m. to 3 p.m. and from Monday to Friday. Another polling station, located in front of Olmsted Hall, is open between 8 a.m to 10 a.m. everyday except Friday of that week. Residents can also vote at both Aberdeen-Inverness and Lothian Dining Halls from April 21-24 from 6 p.m. to 8 p.m.