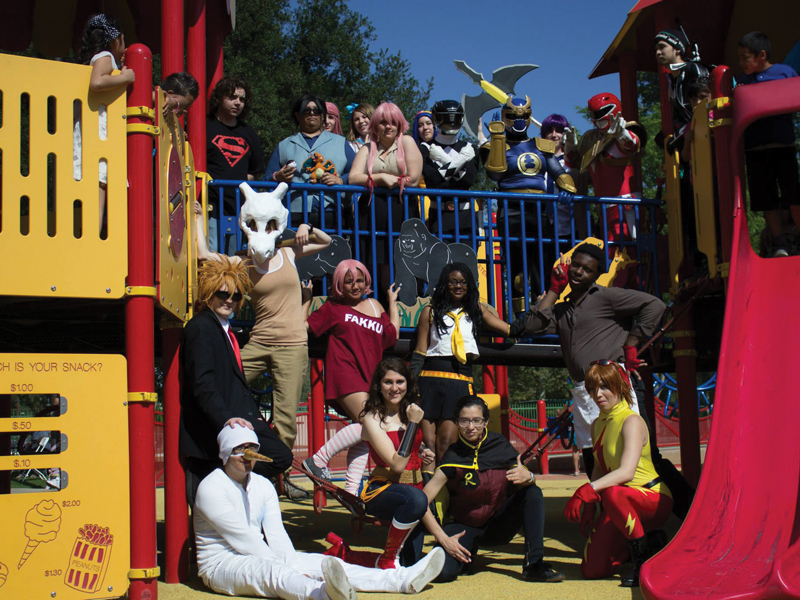 Strutting past the Bell Tower, the sun reflects off the red head-to-toe suit. The theme song “Go Go Power Rangers” intensifies with each step and true ‘90s kids rejoice as the original red Mighty Morphin Power Ranger look-a-like graces UCR with his presence. Even if he lacks the Tyrannosaurus Dinozord, this ranger catches students’ eyes. To many, he’s just a person who’s behind the Power Ranger watch or the Batman mask found walking across campus. But to most, however, he’s a member of the Cosplay Brigade.

UCR’s Cosplay Brigade began four years ago in the spring of 2011. It started as a place where judgment disappears as soon as costumes take over. Here, anyone who is interested in costume role play — aka cosplay — can gather to discuss and create a whole new world with people like them. The club notices the gleam in the eyes of students, whether it’s incoming freshman or wandering seniors. “The light in their eyes never changes,” said founder and current president, Sarah Mendoza. I had the pleasure of sitting with fourth-year psychology student as well as third-year incoming president, Karen Huynh, to discuss the club in its raw glory.

I have to admit, my knowledge of costume role play was as limited as the seats in Rivera library during finals. My mind automatically went to larping (live-action role play) and anime. However, Sarah and Karen set me straight right off the bat. Cosplay Brigade stands out from the rest of the pack — for instance Comic-Con. As Comic-Con has begun to swim up the mainstream with its growing popularity, many cosplayers have struggled with a location to enjoy their elaborate and “show-off-worthy” costumes. Due to the mass amount of guests (which can add up to 30,000 people or more) attending more for the celebrity appearances rather than the costumes, many cosplayers find their big-winged, multi-attachment costumes creating a safety hazard. Cosplay Brigade has created a safe and joyous environment where it allows all cosplayers (in and outside of UCR) to have fun without the possible harassment and judgment from guests who may treat cosplayers as “objects rather than people,” said Sarah. The club has even found a way around the rules from certain convention centers. “Well, we have to follow UCR’s rules,” Sarah explained regarding weaponry props. “But we show them how to make it without breaking the rules.” Plans for future costumes and themes consist of TV shows such as “Game of Thrones.” An accessory of a Valyrian steel complementing a costume may raise eyebrows of administrators. But these pros got them covered with safe and approved props.

Some of the members have tested their makeshift weapons and geared up for not only campus activities but also conventions such as Pacific Media and Anime Los Angeles. The Artistic Expression clubs have seen the Cosplay Brigade appear in many campus events, most recently at Chinese Culture night. They opened the event with a skit, performed by Sarah and Karen, along with other members, embodying the true meaning behind the club and the members: procrastination. “We’re worse than (typical) college students,” Sarah added as she explained that the skit had an “Alice in Wonderland” feel as they took guests on a journey through the “rabbit hole” while running into familiar faces along the way. Members were decked out in costumes which matched their characters — which inevitably matched their everyday personalities students may see around school. It seems as though even altered personas of college students can’t kick the procrastination itch.

Their biggest event of the of the year, however, is Geek Week. Geek Week is a geek-wide event during the second week of spring quarter amongst the “nerdier” clubs found around campus, as Sarah and Karen explained it. “Don’t be afraid to show your geeky side!” Sarah cheered when asked what the main goal of the event was. Cosplay Brigade wants to break all the stigmas that pertain to the word cosplay. “We’re not weird, we just like to have fun,” Karen said, a member who has been passionate about it since her freshman orientation.

They also focus on breaking the stigma and norm that girls don’t play video games. Events throughout the week have included live-action chess tournaments, something very similar to the wizard’s chess game in “Harry Potter,” where members choreograph their fight scenes for each chess game. The most successful element of Geek Week is “Behind the Voice.” BTV is a panel of voice animators who open up and answer questions for any and all. Last year, HUB 302 reached maximum capacity of guests who attended the BTV of Dante Basco, voice of many cartoon and anime characters, including roles in “American Dragon: Jake Long” and “Avatar: The Last Airbender.” Their third and most recent week had Patrick Seitz — anime and video game voice as well as MFA graduate from UCR. Despite timing and collaboration issues with other clubs involved in Geek Week, they are beyond excited for next year’s.

Other events they have participated in include the Pokemon 3DS event, in which they battled other clubs around campus, such as the Gamers’ Guild, Origami Club, Starving Artists and Chinese Martial Arts Clubs. The clubs participating assumed the roles of the eight gym leaders and villains and fought in a Pokemon tournament. And in the end a member of Cosplay Brigade brought home the gold.

They have had some of the best photobombs ever as members cosplay for certain ASPB events. One member geared up for the premiere of Thor 2 with a full-on Loki look — being the only cosplayer in line. But hey, she left her mark on the Marvel madness UCR was a part of. But costumes do not end there. The club encompasses all themes of costumes, like DC and Marvel as well as video games, with anime being the most popular at the moment. They hope to break out into other fandoms such as “Games of Thrones” and Disney. Dedicated members use this to their advantage to display their costume skills. This not only shows off the club’s talent but also encourages others that it is okay to play and like cosplay with no shame.

The ladies leading the club have many more plans for a bigger and better year to come. They want all members and interested people to stay motivated to continue with their hobby with sewing parties, barbecues and more hangouts in general, with not only those at UCR, but all cosplayers in the Inland Empire. “I don’t want to give too much away,” Karen started, “but let’s just say we are going to have a bigger presence on campus!” With talk of a Cosplay Brigade Beta, they plan “to dominate the world … Hail Hydra!” Cosplay Brigade welcomes all, where you can dress however you like, and the likes don’t matter. So if you’re interested in taking on another life for a little while, you can help with the theme of “Frozen” and just “let it g