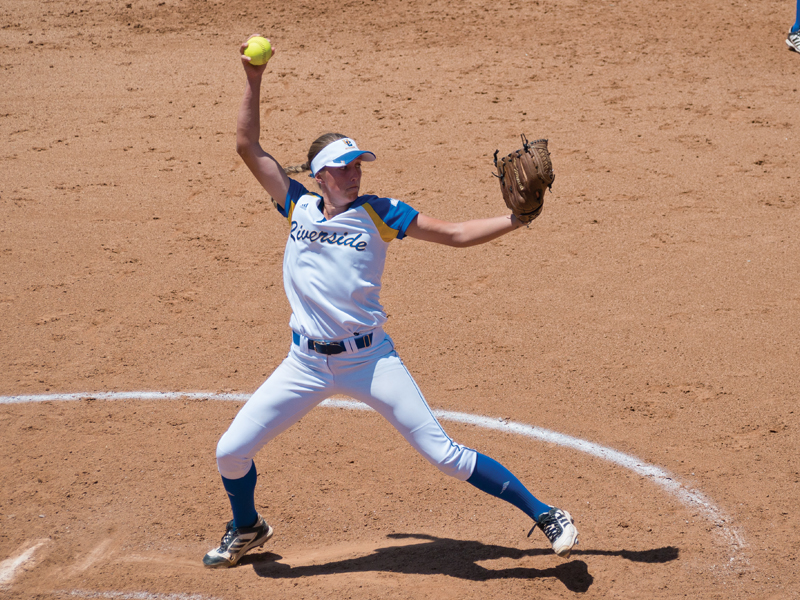 Playing on the same day as UCR’s Spring Splash, the UC Riverside softball team couldn’t withstand the flurry of hits from UC Santa Barbara en route to a 4-1 loss on the team’s Senior Day.

Alyssa Razo allowed 13 hits in seven innings. The pitcher only gave up four runs and a single home run on the day while striking out three players. Dionne Anderson led the team with one run, while Karina Romero tallied two hits as well.

UCR’s lone run was scored in the top of the first from a single from Anderson, who stole second and then scored on the next play from an up-the-middle single from Romero.

The second inning had started off strong from Razo’s two outs, however, two hit-by-pitches and a walk led to an easy score by UCSB. The game would remain tied until the top of the fourth. The Gauchos’ bats had three consecutive hits. Razo, however, closed the inning with two runners left on base.

UCSB tallied two more runs from the fifth to the sixth inning.

Finally, at the bottom of the sixth inning, UCR had a chance to score after a single from Anderson followed by another from Romero. Natalie Sanchez sac-flied to right field and allowed Anderson to reach third. A batting substitution of Ashley Ercolano for Shylene Helms did not work as planned as she popped up to the pitcher. UCSB’s Shelby Wisdom closed the inning with the two lonely runners on base.

The second match of softball’s double-header versus UCSB ended with a 3-0 loss. Shelby Wisdom pitched a second game in a row for UCSB, while Sophie Slagle pitched seven innings for the Highlanders. UCR and UCSB’s hit total differed only by two, but UCSB scored three more runs than the Highlanders.

Dionne Anderson started off hot for the Highlanders as she singled, then advanced to third on a throwing error. However, three consecutive outs would leave her there. At the top of the second, UCSB had two runners on base from a single and walk, but Slagle performed strongly and closed the inning out.

The final scoring inning occurred at the top of the fifth when UCSB’s Arianna Palomares was walked, then Wisdom singled to first base. Palomares then got caught in a pickle and was called out which left Wisdom at second. The bases were loaded after two walks, and then a hit from Stark forced Wisdom out at home. However, Lauren Boser then singled to center field, bringing in the last two runs for the Gauchos.

The two losses drop softball’s conference record to 3-14, with a 22-28 overall record. Next up for the team is a road doubleheader against Cal Poly on Friday, May 9th.