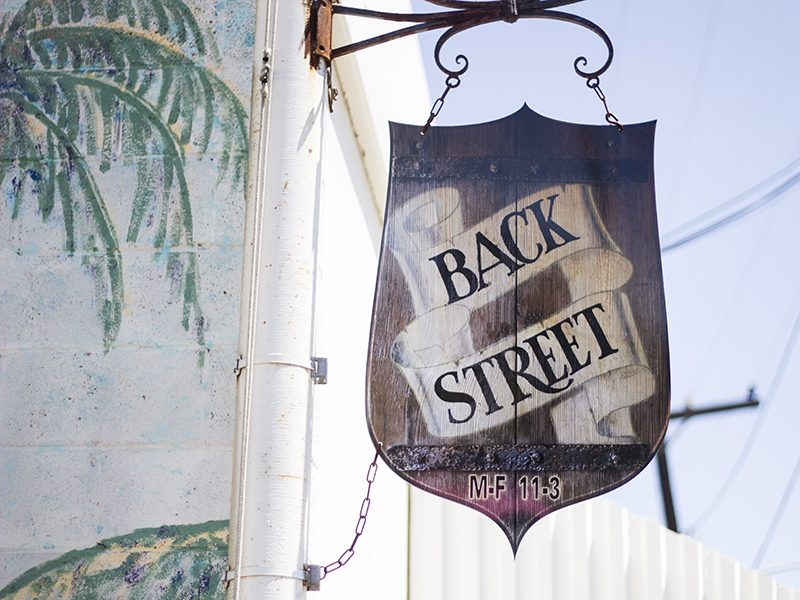 If you’re craving a simple and delicious sandwich for lunch, look no further than Backstreet Restaurant. Located near downtown Riverside off Nelson Street and between Magnolia Avenue and Brockton Avenue, this mom-and-pop sandwich shop has been around for 47 years. (July will mark its 48th anniversary!) It is open Monday through Friday, but only from 11 a.m. to 3 p.m. It originally was a small market grocery store before Mac and Barbara McCluskey bought the place and turned it into the Backstreet Restaurant, and today, it’s still family owned and operated.

The building has not been changed over the years, with most of the original furnishings still intact (the cashier still uses the original cash register, which is now easily over 80 years old). Entering the main building it becomes clear how long the place has been around, especially with a small wall mural dating the year the restaurant was opened: 1967. The kitchen and interior is fairly small with the majority of the space reserved for the sandwich ordering, with a side salad bar and a handful of tables and chairs. The main area of the restaurant is the garden patio outside shaded by a canopy of trees (much needed and appreciated during the warm afternoon). It’s just a nice and relaxing place with ample seating to sit and eat lunch on a nice sunny day.

The garden patio is lovely but the main reason to come here isn’t for the view — it’s for the sandwiches. The menu also has not changed much over the years with simple choices such as roast beef, corned beef, ham, turkey and pastrami on various types of bread. Recently they have added tuna to their list of meats, on top of that, they’ve also added two salads: a spinach salad and a Caesar salad. The sandwiches and salads also come with a simple side of baked beans, potato salad, coleslaw or potato chips. All of the meats and sides (except chips) are made fresh in house every morning, all with their own secret family recipes. Roast beef and pastrami are the more popular sandwich choices with the usual go-to dessert item being the banana cream pie.

I ordered a roast beef sandwich (all sandwiches are $10.19) on sourdough bread with Swiss cheese (only option for cheese) and I also got a side order of baked beans and potato salad. The sandwich was made with shredded roast beef, rather than sliced, with a secret recipe au jus sauce poured on top instead of on the side. It is a fairly large sandwich with a hearty helping of roast beef and a small amount of mayonnaise to help moisten the meat. The roast beef was juicy and the au jus added an extra kick to the sandwich (I wished there was more of it on the sandwich though). The mayo added a slight tang to the beef but overall complemented the sandwich very well. The sourdough bread was your conventional sourdough, with nothing special about it; it didn’t affect the taste of the meat but did leave that distinctive sourdough taste of at the end.

The baked beans were fairly straightforward, with a sweet smell and a heavy brown sugar taste. Pretty simple, but undeniably tasty. The potato salad had a very fresh and homemade taste to it. It had a slight green tinge to it from the bits of parsley and celery, which, along with red bell peppers, helped to add to the freshness. The potato salad was also light on mayo as it was mostly mustard-based, which helped to give it a lighter and slightly tangy taste.

I finished off the meal with a delectable white chocolate raspberry cheesecake (all deserts are $4.75). The cheesecake had a chocolate crust and was topped with whipped cream (a bit too much for my taste) and white chocolate flakes. The cake was not very dense, which was a departure from most conventional cheesecakes. It gave the cheesecake a lighter, fluffier taste as well as hints of raspberry from the swirl through the cake. It was an excellent way to end the meal.