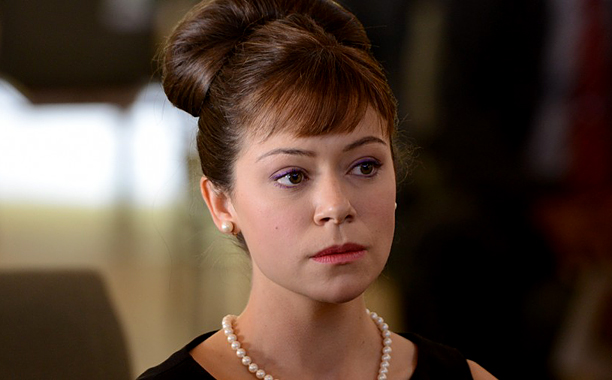 I watched the first season of “Orphan Black” in reruns on BBC America, and while I didn’t know everything that was going to happen, I already knew a lot of things. I heard about the twists and turns in that season, but because of my prior knowledge, not everything was a twist for me.

Obviously, watching season two live is a completely different experience. And this week, while watching “Governed by Sound Reason and True Religion,” I was surprised by the turns the story was taking. I’m not sure that these turns are all good things, but we’ll get to that in a minute.

The biggest surprises this week come in Sarah’s (Tatiana Maslany) plotline. With Art’s (Kevin Hanchard) help, she starts investigating who took Sarah’s daughter, Kira (Skyler Wexler). Last week, we were told that the Proletheans had her, but things happen fast in this episode: We only spend 15 minutes investigating the possibility that the Proletheans took Kira before Sarah finds the kidnapper, who takes her to Mrs. S (Maria Doyle Kennedy) — and to Kira.

With the way Kira’s disappearance played such an important role in the season one finale and in the season two premiere, I thought we might spend more of the season on figuring out who took her. But in spite of that, I will say that I’m glad we know she’s safe — at least for now.

The other twists the episode takes aren’t so much surprises as simply confirmations of things we already knew or suspected.

For one, we get some — but very little — insight into Mrs. S’s background. Sarah confronts Mrs. S with the photograph of Project Leda that Sarah’s biological mom gave her in the season one finale, but Mrs. S denies any involvement in the project.

For now, it looks like Mrs. S does indeed have Kira and Sarah’s best interests at heart. In the episode, Sarah meets the people who helped Sarah, Mrs. S, and Felix (Jordan Gavaris) when they first arrived in Canada — Mrs. S’s old network, known as “The Birdwatchers” — but unfortunately, they aren’t quite the good people Mrs. S believes them to be. As it turns out, the Birdwatchers sold Sarah and Mrs. S out to the Proletheans.

Sarah, Kira and Sarah’s foster brother Felix escape to locations unknown at the end of the episode. I’m not sure how this plotline is going to play out. So far, the best parts of the show are when the clones get to play off each other, but with Sarah gone, it’s possible the clone plotlines will just get compartmentalized. Alison, Cosima and Helena all have their own worlds that don’t really overlap unless Sarah is there to make them overlap.

I don’t want the show to be divided up into Sarah’s plotline, Cosima’s plotline, Alison’s plotline and Helena’s plotline (all of whom are played by Tatiana Maslany)— although that makes reviews easier. I can only hope that either the writers know what they’re doing by sending Sarah, Kira and Felix on the run or that this plot will end soon.

Another problem with Felix leaving is that it puts Alison in a tight spot. One of the other confirmations we get in this episode is that Alison’s husband, Donnie (Kristian Bruun), is Alison’s monitor  — the person employed by Dr. Leekie and the Dyad Institute to watch over each clone — which destroys Alison on a lot of levels.

This revelation of Donnie’s monitor status happens to coincide with Aynsley’s funeral. At first, Alison was holding it together at the funeral, refusing a drink and keeping her sobriety intact. But once she started to suspect Donnie — this time, based on text messages on his phone — she started drinking again.

After confirming Donnie is her monitor — and therefore, Alison let Aynsley die for no reason — Sarah wants to rely on Felix, but as mentioned above, he skips town with Sarah.

Now, I’m not saying that Felix was obligated to stay with Alison, but I’m very, very concerned because Felix was all Alison had. She was essentially emotionally dependent on him, and if she’s already upset over Donnie and Aynsley’s death, it’s not going to get better in the future.

Yet again this week, Cosima gets the short straw in terms of story time, but that’s probably because there simply isn’t as much ground to cover in Cosima’s plot. This week, she meets with Dr. Leekie and scopes out her lab with Delphine (Evelyne Brochu). I suppose this means she’s taken Dr. Leekie’s job offer.

Also important on Cosima’s side of things, Cosima meets Rachel (Tatiana Maslany). Although this plays out so far as mostly a boss-employee relationship, Rachel does give Cosima Sarah’s sequenced genome and asks her to figure out why Sarah is the only one who can have children. As Cosima gets further in her research, I suspect the fact that she’s investigating Sarah might cause some tension, and it looks like Cosima will get to meet — or at least research — other clones in the future.

As if all those plotlines weren’t enough, the rest of the episode deals with the Proletheans, who take Helena from the hospital.

We do learn that Helena survived her gunshot wound because she and Sarah are “mirror twins” — a condition in identical twins where their organs and features can be mirrors of each other – and Helena’s heart is on the right side rather than the left, but we don’t get that much information on the Proletheans.

Right now, the Proletheans seem like your average cult, but I figure it’s important that the leader, Henrik (Peter Outerbridge), values both science and religion, which makes them slightly less offensive than simply being religious zealots would make them.

Henrik’s goal with Helena, however, is just as creepy as might be expected from a cult — he wants to see if she can “be fertilized” — because she’s Sarah’s twin and Sarah can have children. If I’m worried about Alison on an emotional level, I’m worried about Helena on a physical one. Either she needs to get better really slowly or someone needs to go rescue her from the Proletheans.

It’s hard to say where “Orphan Black” is going from here, especially if it continues to pull the kind of turns it does in “Governed by Sound Reason and True Religion,” but it’s definitely going to be interesting at the very least.