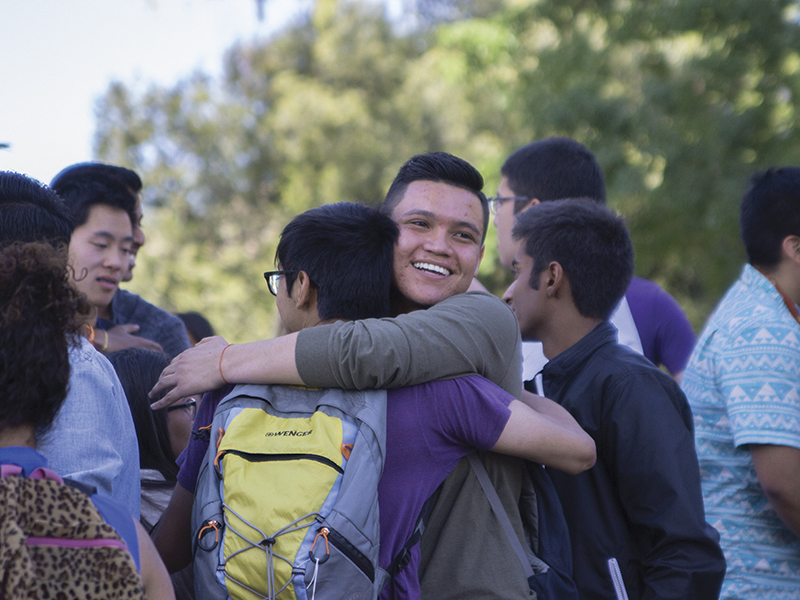 After a week of voting, a record-breaking 38 percent undergraduate turnout ushered the [YOUR]SIDE party into office during the 2014 ASUCR elections, with [YOUR]SIDE presidential candidate and current CHASS senator Nafi Karim besting two other presidential contenders to succeed outgoing ASUCR President Sai Patadia. Students also voted down two referendums in close votes, while endorsing the GCAP referendum by a healthy margin.

Karim will take office at the end of the academic year after receiving a plurality of 2,550 votes, or 42 percent of votes cast. His closest competitor, BCOE senator Sean Fahmian of ABC: A Better Choice, earned 2,353 votes and tallied 39 percent of the vote. Executive Vice President and Vox Populi standard-bearer Armando Saldana finished a distant third with only 19 percent of the vote, or 1,199 votes. The race was the closest of any individual contest, with a slim 197 votes separating the top two candidates.

“I am humbled by the opportunity to move UCR forward and grateful to everyone who have (sic) supported and guided us along the way,” Karim said. “While I cannot promise that all of us will agree on every decision, I do promise that every decision I make will be founded upon the genuine and sincere effort to do what is best for UC Riverside.

[YOUR]SIDE also ran the table in the executive cabinet and director positions, taking all seven seats by substantial margins. No [YOUR]SIDE candidate for executive office earned less than 42 percent of the vote. The largest margin came in the battle for vice president of external affairs, where CHASS senator Abraham Galvan dispatched opponent Breana Ross of ABC: A Better Choice 57 percent to 43 percent. Vox Populi did not field a candidate.

“It’s just like hundreds of pounds have been lifted off my shoulders,” Galvan said of the campaign’s end. Galvan specifically identified increasing involvement in the UC Student Association, creating a comprehensive UC agenda and supporting voter registration efforts in advance of the 2014 midterm elections as goals he will pursue upon taking office.

In addition to Galvan, CHASS senator Fernando Echeverria topped his contenders to earn the position of vice president of internal affairs and CHASS senator Michael Ervin defeated two other candidates for the executive vice president position. Jessica Urquidez was elected as outreach director, Ashley Harano was elected as personnel director and Ravin Rathod was reelected to another term as marketing and promotions director.

In the senate, [YOUR]SIDE coasted to a majority, claiming 11 of the 16 available senate seats. No [YOUR]SIDE candidate failed to be elected to the senate. The remaining five seats went to candidates from ABC: A Better Choice. Vox Populi was shut out of ASUCR entirely, with no candidate winning any of the seats up for election.

Colette King, a [YOUR]SIDE senate candidate who earned 1,657 votes — the single highest vote total of any candidate for senate — expressed her desire to make ASUCR more accessible to students. “It is imperative to first establish an easier way for students to (have) access to their student government,” King said. “We need to keep in mind that this is a major commuter school so we should start implementing ways in which students can address their concerns in a more convenient manner.”

“A huge issue that I face — and that many other students face — is the fact that many of our required classes are offered at the exact same time,” said Jackie Jacoby, one of the five ABC: A Better Choice members elected to the senate. “I’m determined to work with administration to change these scheduling conflicts and allow CHASS students the opportunity to thrive.”

Elections week also saw the results of three referendums that would utilize student fees for various campus goals. The GCAP referendum, which would continue a $2.50 fee on students to fund sustainability internships and green projects, passed resoundingly with 66 percent of the vote. “This speaks in volumes of how important sustainability is not only to the current student body but to the future of UC Riverside,” expressed current Vice President of Internal Affairs Johnny Ta, who oversees the GCAP committee. “This referendum is a permanent referendum which will survive long after our legacy here at UC Riverside … We made history.”

“GCAP was the only one I voted for,” second-year business major Tiffany Ha seconded. “I really liked the environmental aspect.”

However, the two other referendums on the ballot both went down in defeat by a handful of votes. The Associated Students Fee referendum, which would have added $4.50 to student fees to help finance ASUCR projects like the Food Truck Festival and support UCR’s participation in the United States Student Association, failed by only 65 votes. Students voted 49.5 percent in favor and 50.5 percent against the measure.

The Highlander Empowerment Student Services referendum was also defeated at the ballot box, earning 48.5 percent of the vote. The measure would have distributed $14.00 in student fees evenly among UCR’s seven diversity programs, such as Chicano Student Programs and the Middle Eastern Student Center (MESC), to increase diversity programming and provide additional resources for students.

CHASS senator Shadi Matar, a co-founder of the MESC, expressed disappointment that the Highlander Empowerment Student Services referendum failed, but added, “Business will continue as normal for them as well as the (MESC) … The centers are not in any danger of closing or stopping their activities and will continue to put on great programs next year.”

Student reaction was mixed to the failure of the referendum. Alicia Nyein, a fourth-year political science and public service major, said she was disappointed at the results. “I feel like (students) saw the $14.00 and freaked out,” Nyein remarked. “It would have really benefited them.” Meanwhile, biochemistry majors Briana Eason and Vanessa Varela expressed opposition to the ASUCR and Highlander Empowerment referendums, saying, “It didn’t really seem like they were using the money. (They) were kind of pointless.”

The results came amid record-shattering voter turnout, with 6,557 students voting this year, which is more than 1,000 more than the previous 2010 record of 5,486. The turnout rate, 38 percent, was also greater than any previous ASUCR election — the next-closest record was set at 32 percent in 2011.

However, the competitiveness may have come at the cost of campaign civility, which included the alleged tearing down of campaign posters. “This campaign was brutal from start to finish,” Jacoby said. “The negative campaigning that swept through the campus was unreal.”

Fahmian said the elections results were more about voter turnout than ideas. “I feel like it was a little upsetting at times because it came down to how many people you can give a flyer to and kind of force to vote rather than having a conversation with them and educating them on who you are and what you represent,” Fahmian said. “It felt like elections was more about the voter turnout rather than … getting to know what each party was really about.”