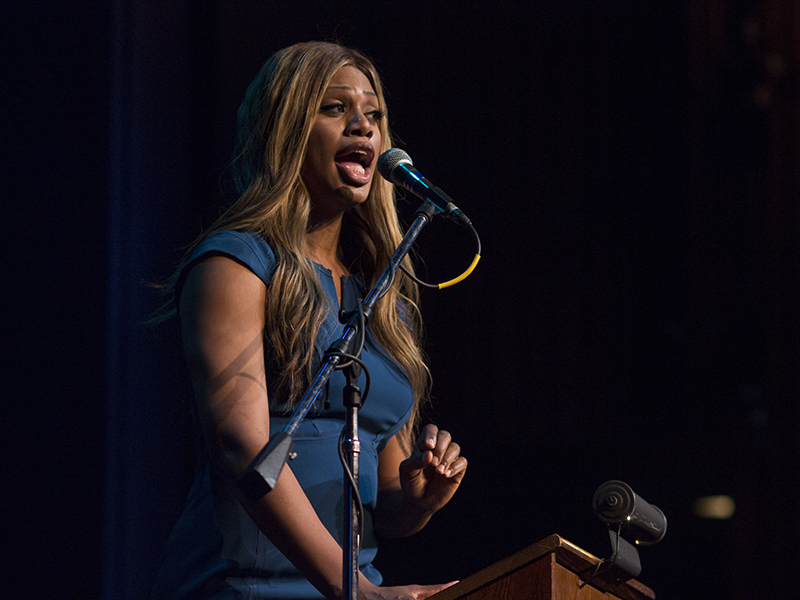 Laverne Cox, a transgender woman famous for her role as Sophie Berset in the Netflix series “Orange is the New Black,” visited UCR last Wednesday on May 7 to discuss the trials she faced throughout her life and connected it with the issues that people in the transgender community continue to face today.

Cox spoke in the university theater, where literally every seat was taken up by students, faculty and more. So many arrived at the event that several students here and there eventually just stood or sat in the aisles. The entire room was abuzz with a general sense of talking and laughter, which built up excitement and anticipation. One could’ve assumed that Bill Gates was coming to deliver a TED talk.

The entire audience went crazy when Laverne Cox took the center of the stage. Cox held the crowd’s attention for the entire hour and a half that she spoke. Her words were infused with a powerful, personal touch, as she laid bare her story of defying social norms to be who she truly was. There is a saying that the opposite of bravery is not cowardice, but conformity. Cox’s words are testament to that bravery.

Cox began by going right to the heart of the subject matter: LGBT acceptance and justice. As a transgender woman of color, Cox stated she wanted nothing more than the acceptance of her “multiple identities,” and to claim them “with pride, in public.” Cox presented this mission statement through the lens of justice by saying, “Justice is what love looks like in public, and transgender people could use a little justice, we could use a little love.” Cox apptly transitioned from that abstract concept of justice to a more tangible sense of the word by quoting Sojourner Truth, her voice gradually materializing as she slowly repeated the words: “Ain’t … I … a woman?”

The crowd loved every single second of Laverne Cox’s speech. Every other moment, somebody in the crowd made some sort of cheerful howl or remark that ended up making most of the audience laugh, as well as Cox herself. Bill Gates may not have been there in UCR’s theater, but the audience present wouldn’t have wanted anybody else up on that stage.

Cox continued her talk about gender by quoting Simone de Beauvoir from “The Second Sex,” saying, “one is not born a woman, but rather becomes one.” “The Second Sex” was one of many books about gender that Cox read in her childhood, which further helped her establish her own identity. “Our culture teaches people that if you have a penis then you can only be a man who’s attracted to women, and vice-versa if you have a vagina … Let’s stop being the gender police.”

The presentation took a darker turn when Cox opened up more about her upbringing. She described how tough it was to have her mother fully understand and sympathize with her as she explored who she really was. “I’ve had … very interesting conversations with my mother about what terms to use, and how to speak about the transition to my new gender identity,” she said. It was comforting to learn that the conflicts between Cox and her mother were tough, but eventually successful.

But many others were less sympathetic toward Cox, as she wasn’t even able to get into certain classes simply because of her gender. “When I was in middle school,” she said, “I was told I could enroll in jazz and dance, but not in ballet because that would’ve been ‘too gay’ for a guy like me.” Puberty hit Cox around the sixth grade, and she found that she was attracted to boys, for which she felt great internalized shame from her community’s disapproval. “My grandmother Madea passed away when I was in sixth grade,” she said, “and I remember being up late one night, mourning her loss, and thinking that she was in heaven, and that she knew about my ‘sinful’ thoughts. I felt like I was disappointing her.”

Cox’s voice softened, even trembled a little, when she brought up her suicide attempt, where she gulped down pills from a bottle and went to sleep “hoping to never wake up again.” The entire audience cheered for Cox when she choked up and then revealed the heartbreaking statistic that “41 percent of all transgender people have attempted suicide, compared to 1 percent for the rest of the population.”

Cox spent the rest of her speech talking about how she adjusted to her new identity as an adult, which included dressing up as a woman for the first time in college, how tough it was to go through transitioning for about six years and the continued harassment that she ran into on the street. For example, she brought up a memory of a black and Latino man debating each other at a subway over which racial slur to call her. Another time, she was kicked by a man on a sidewalk, and the police didn’t arrest or pursue him due to the physical assault being labeled as simple harassment.

Laverne Cox ended her presentation with a short Q-and-A session. The questions (and the thank-yous that were said before them) addressed a number of things, such as how to confront and stop LGBT bullying, or how to get people to care about the issues at hand. Above anything, Cox stressed the importance of creating a broader dialogue with as many people as possible, as well as the importance of not focusing on too much negativity. “I want to be able to change people’s hearts and minds,” said Cox, “but I have to go where it’s warm. We have to meet people who are willing and open to having the discussion. This is life and death for a lot of people.”

The friendly presentation concluded with a massive group photo with Cox and most of the audience onstage. The audience flocked to the stage eagerly, ready to stand proud next to the poised and powerful speaker. As they did so, it was only obvious how Laverne Cox’s speech inspired the hearts of many and united them in overcoming the trials many face to simply be themselves.