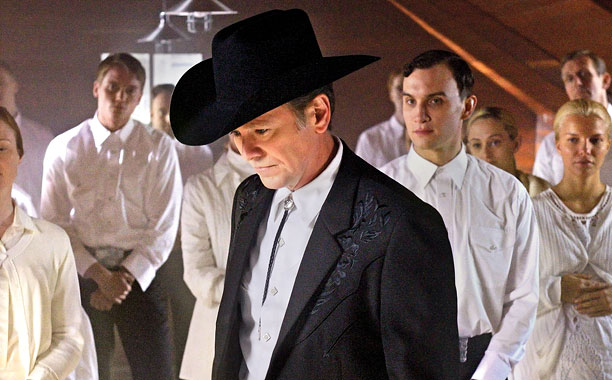 While watching season one of “Orphan Black,” I started getting overwhelmed by plot – all the action and drama – about halfway through. This is a show that is always moving forward and always has another twist coming.

That commitment to drama — and clear vision of where the season is going — is probably part of what makes “Orphan Black” consistently good. However, it can also make the show tiring to watch. Whenever something goes right for any of the clones, three other things go wrong.

“Mingling Its Own Nature With It” is one of those episodes where everything goes wrong, and at this point, we’re only three episodes into the season. Granted, that is almost one-third of the way through an “Orphan Black” season, and at the one-third mark of a television season, we’d be expecting a twist — but maybe not this many.

The episode picks up at least a few weeks after “Governed by Sound Reason and True Religion.” This is never explicitly stated, but because Alison’s (Tatiana Maslany) play is done with rehearsals, I assumed it had been at least a couple of weeks.

Sarah (Maslany), her foster brother Felix (Jordan Gavaris) and her daughter Kira (Skyler Wexler) have been on the run that whole time, and it’s wearing thin. So Sarah takes them to a house out in the country she hopes will be safe.

It’s at this safe place that we meet Cal Morrison (Michiel Huisman), a former technology guru who now lives off the grid. Entertainment Weekly had talked about “a new guy” in Sarah’s life, but I didn’t pay it much attention. So, I was genuinely surprised at the reveal that Cal is likely Kira’s father – Kira asks if he’s her dad and Sarah later confirms it – because the character had been presented as just one of Sarah’s previous love interests.

Now, with a show like “Orphan Black,” I’m not going to count on the fact that Cal is actually Kira’s father until a paternity test is done, but it’s nice to see Sarah and Kira get to spend time together in a relaxed setting. They haven’t done that yet this season, and the stop at Cal’s gives them the chance.

Plus, I appreciate that the newfound companionship among Kira, Sarah and Cal leads Felix back to Alison (Maslany) when he leaves them to support Alison at her opening night performance of the musical.

Here, we see the major problem with “Mingling Its Own Nature With It” jumping forward in time a couple of weeks: It doesn’t give us enough of a focus on Alison and her problems. Over these few weeks, Alison has had no one to talk to and she’s been self-medicating with alcohol and pills again. We see the self-medication multiple times, but there’s not much of a build. We don’t get to see how far Alison has derailed until it’s too late.

The only indication of how bad it has gotten is in her confrontations with police officer Angie (Inga Cadranel), who is posing as a newcomer to the neighborhood to get close to Alison and learn more about these look-alikes – she doesn’t know about the clones yet – and what he patner, Art (Kevin Hanchard), is hiding from her. With everything else that has been going on lately, Alison incorrectly assumes Angie is a secondary monitor for her.

I’m glad Alison doesn’t accept Angie right away, as she might have done at the beginning of season one. But by the end of that season, when Alison was cut off from everyone and equally as upset as she is now, she first tied up and tortured her husband Donnie (Kristian Bruun) with hot glue and later let her neighbor Aynsley choke to death. If I were Angie, I’d be getting out of there.

However, before Alison has time to do much more than call Cosima (Maslany) and tell her about her potential new monitor, it’s opening night of her musical “Blood Ties.” I recently learned that this is an actual, real life musical about “four friends stuck with the daunting task of cleaning up after a suicide,” which is a musical I would definitely watch, particularly since I doubt we’ll get to see much more of it in “Orphan Black.”

During the opening performance, Alison’s self-medication catches up with her, and she falls off the stage. The last we see of Alison, she’s crashed out on the floor, barely responding to Donnie and the other people around her.

Maybe now Felix and the others will be able to see just how bad Alison’s situation has gotten. While Alison has the least high stakes of the clones — she could end up in jail but not dead or a lab experiment — she’s unsurprisingly the first one to fall apart, particularly since she was left on her own to deal. I guess we’ll just have to wait until next episode to see how this ties into the overall season arc.

It’s not entirely clear what Cosima has been doing in the time jump, but I assume she’s been working in her lab with Delphine (Evelyne Brochu), Cosima’s monitor, girlfriend and lab partner. But now, they’re finally getting some practical evidence to work on.

Delphine shows Cosima some videos of yet another clone, Jennifer Fitzsimmons (Maslany), who recently died from polyps in her lungs — symptoms of the same disease Cosima has. When Delphine and Cosima do an autopsy, they discover that Jennifer also had polyps in her uterus, which could have resulted in infertility.

It’s not entirely clear — just as when Delphine gave Dr. Leekie a sample of Cosima’s blood in the season premiere — why Delphine lets Cosima know about Jennifer now. It’s only been three days since Jennifer died, so my major question is why Cosima didn’t know about her sooner. She’s been working for the Dyad Institute in part to find a cure for the disease, and you would think Jennifer’s death would be an important piece of the puzzle.

Maybe that’s why Delphine shows Cosima the tapes, though I still question if Delphine is showing Cosima these tapes for her own good. It’s clear that Dr. Leekie doesn’t know how to help the clones with this disease since Jennifer died, so it’s possible that Delphine hopes she and Cosima will be able to figure it out. Or is Delphine still taking orders from Dr. Leekie?

Finally, we have Helena, who seems to have recovered somewhat from her injury during the time jump. She’s recovered enough at least that Henrik (Peter Outerbridge), leader of the Proletheans, puts his plan to marry her into action. I’m hoping police officer Art , who is investigating the Proletheans, can help Helena before Henrik can fulfill the other part of his plan, which is “fertilizing” Helena.

In the final moments of “Mingling Its Own Nature With It,” tragedy of a sort also finds Sarah. I never suspected Sarah would be able to run for long, and it’s nice to be proven right as we see the Dyad head of security, Daniel (Matthew Bennett), catch up with Sarah and Kira in the end.

While Sarah manages to make sure Kira is safe — or at least with Cal — she isn’t quite so lucky. Daniel holds her at gunpoint and forces her to drive away from Cal’s house. Strangely, he’s most concerned about where Sarah got the Project Leda photograph. But before we can learn anything about why he cares so much, another car crashes into theirs.

Like Alison’s crash to the floor, this car crash seems somewhat aborted. There is a shock factor because we don’t get to see the other car involved in the crash until it hits Sarah and Daniel’s car, but we also don’t get a chance to really process the crash before the episode is over. While Alison’s crash is something that can be picked up at a later moment, however, Sarah’s crash seems to be more immediate and could be the opening of next week’s episode.

Continuing in the vein of season one before it, season two is still laying the groundwork for the season with its third episode. “Mingling Its Own Nature With It” doesn’t gives us many answers. It simply raises more questions.

Season one was able to bring all its plotlines together in the end, so I expect season two will be able to do the same. It’s not entirely clear how that’s going to happen yet, but we’re only three episodes in. And if the rest of “Orphan Black” season two is as busy as “Mingling Its Own Nature With It,” there will be plenty of time for everything to come together.