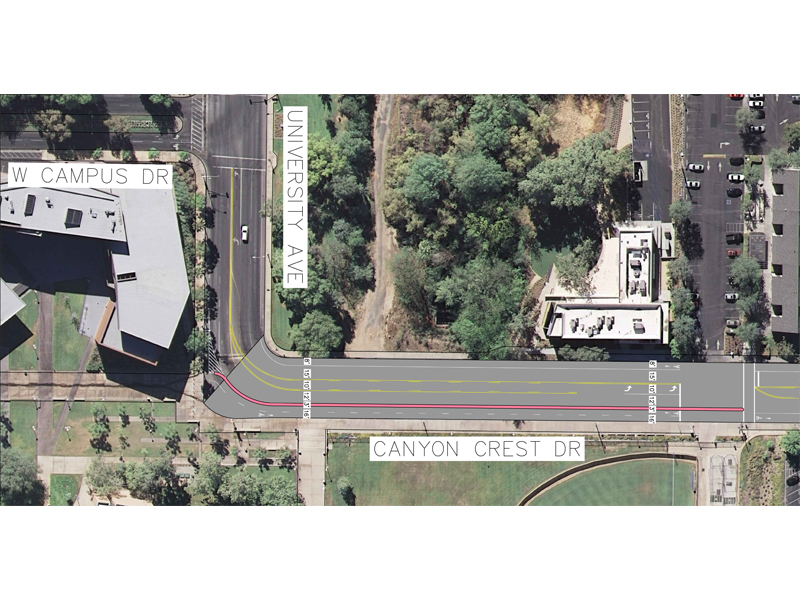 Students will ride safer with the upcoming installation of a double bike lane near campus, which aims to reduce bicycling accidents and alleviate traffic caused by bicyclists riding in the wrong direction. Spearheaded by members of ASUCR, Transportation and Parking Services (TAPS) and city officials, the construction project is pending design approval before its overall implementation.

TAPS Alternative Transportation Manager Irma Henderson said the lane, starting from the side of the Amy S. Harrison softball field to the turnout on Canyon Crest Drive and University Avenue, seeks to ensure students are cycling with the flow of traffic and riding in their respective lanes.

“As bicyclists are coming down Canyon Crest (toward campus), the tendency is to ride on the wrong side of traffic,” she said. “With the creation of the lanes, it will give cyclists a safer path of travel. They won’t be cutting that corner where (the streets) meet.”

In most instances, Henderson explained, students cut across all four street lanes to enter campus, possibly veering into the way of traffic.

“Crossing in that manner is not riding correctly,” Henderson said. “Bicycles, according to the California Vehicle Code, should be following the same rules of the road as cars do. By crossing four lanes of traffic like that, not only is it precarious, but also against the vehicle code.”

At the beginning of every fall quarter, TAPS, in conjunction with the Riverside and UC Police Departments, provides booths for bike registration, hands out information on bike safety practices and teaches students how to safely ride a bike.

In addition, TAPS officials are also working to construct Lot 32, across from Lot 30. The new lot aims to alleviate the overcrowding of vehicles during peak times and will be completed for fall 2014.

Wit the expected increase of students for the 2014-15 academic year, ASUCR CHASS Senator and member of the TAPS advisory committee Sandy Saly said the parking accommodations may not benefit every student on campus but will provide available parking to those individuals who need it.

“This was one of my many projects I had this year with TAPS,” Saly said. “Personally, I believe it will benefit students … It will definitely contribute to additional parking availability.”

Riverside city officials are also looking to fix the sidewalk alongside University Avenue (on the side across from the Arts Building), which is interrupted by two freeway ramps and a dirt walkway near the 215 freeway overpass, leaving it an inconvenient path for students to trek.

“Basically there is only one sidewalk that is accessible to pedestrians, bicyclists (and) skateboarders. What the city wants to implement is a sidewalk on the opposite side that is also accessible,” said Saly. “For instance, if students have classes at the UV theatre, they can remain on the north side and continue on that sidewalk instead of crossing the streets.”

Saly, working closely with TAPS Interim Director Greg Artman, also helped push forward a project to ensure the maintenance of lights in Lot 26, in addition to Rustin Avenue and Linden Avenue. At the same time, more blue emergency call boxes were placed around various locations around campus, adding to those already available in parking lots.

The fourth-year sociology law and society student expressed that her biggest accomplishment was the implementation of directional signage on campus, which currently costs an estimated $69,000 for its overall completion.

“Although the proposal for the project was addressed in 2008, I was a part of discussion in furthering the project and executing the final project,” explained Saly. “We currently have 39 directory signs on campus. The project is 90 percent completed and is expected to be fully completed this summer.”