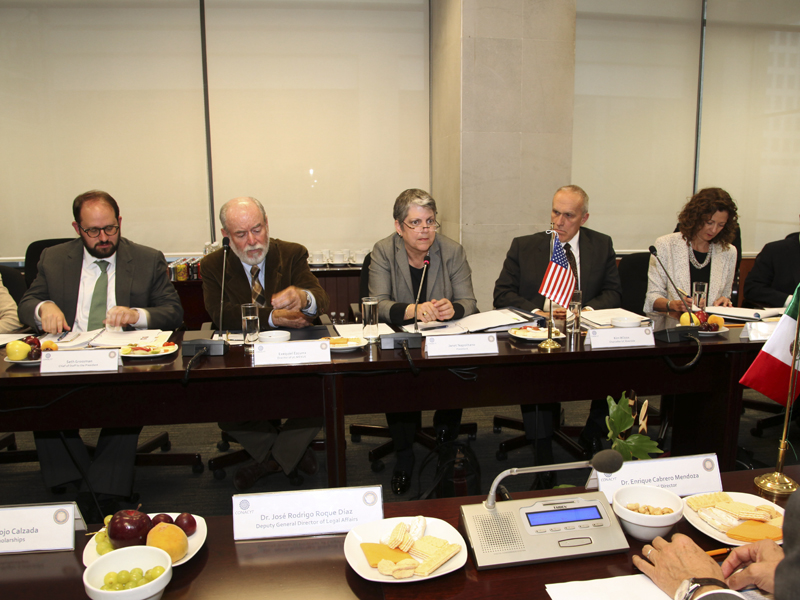 These educational ties have existed between the U.S. and Mexico since the establishment of the University of California Institute for Mexico and the United States (UC MEXUS) since 1980. The institute applies to all UC campuses and has been housed at UC Riverside since 1984.

The UC-Mexico Initiative looks to replicate and reinforce what UC MEXUS currently dedicates its resources toward, which involves securing and supporting binational research on Mexican art and history.

The first meeting between UC and Mexican officials resulted in a signing of a “memorandum of understanding” between the Napolitano and CONACYT Director General Enrique Cabrero Mendoza. The memorandum aims to create a committee composed of three representatives from CONACYT and three representatives from the UC system, including the director of UC MEXUS, Dr. Exequiel Ezcurra. The committee will create a report that will critique current collaborative practices between the two education systems and explore new possible practices that will benefit both the U.S. and Mexico.

Napolitano stressed the importance of cultural ties with Mexico during a meeting with Rafael Tovar y de Teresa, director of Mexico’s National Council for Culture and Arts (CONACULTA). The director plans to send a delegation of high-ranking CONACULTA representatives to UC campuses to identify goals for 2015 that will improve cultural relations between the two countries.

Not only is the initiative encouraging cultural and art exchanges, but it is also encouraging reciprocity of student exchanges between the two countries as well. The National Autonomous University of Mexico has agreed to promote undergraduate and graduate student exchanges in the coming years as part of a pact signed last year by President Barack Obama and Mexico’s President Enrique Pena Nieto known as the Bilateral Forum for Higher Education, Research and Innovation.

Currently 40 UC students study abroad at universities in Mexico and 1,900 Mexican students study in the U.S. The pact looks to send 100,000 U.S. undergraduate students to study in Latin America by 2018, with 50,000 studying in Mexico. As per a meeting between Napolitano, Wilcox and Mexican officials, the first 1,000 students are expected to be selected from UC campuses.

When asked about the low exchange rate of students, Napolitano told News America Media, “U.S. students are deterred by the perception that all of Mexico is violent. Mexican students are deterred because of the view that the United States is hostile. Perceptions are difficult to change, but one of the ways you change them is through actual experience.”

Ezcurra recounts a comment by the president of the University of Veracruz, Dr. Sara Ladron de Guevara when she said, “Are you aware that … we almost never ever get together in these large numbers? We are here because you called us and this shows the moral authority that the University of California has on the Mexican university system. It also shows the responsibility that you have.” Ezcurra sees this as recognition by the universities of Mexico to work together with the UC system to accomplish the tasks that have been set forth in the meetings, saying, “We need to meet this concrete reality of the existence of our border, of migration, of a shared past with concrete actions in and by the university.”

“There are strong economic reasons why we shouldn’t ignore Mexico … there are also very strong cultural reasons that for many of us are as important as the economic reasons,” said Ezcurra. “It will take a while to consolidate but it’s moving forward and I think that in itself is very hopeful.”