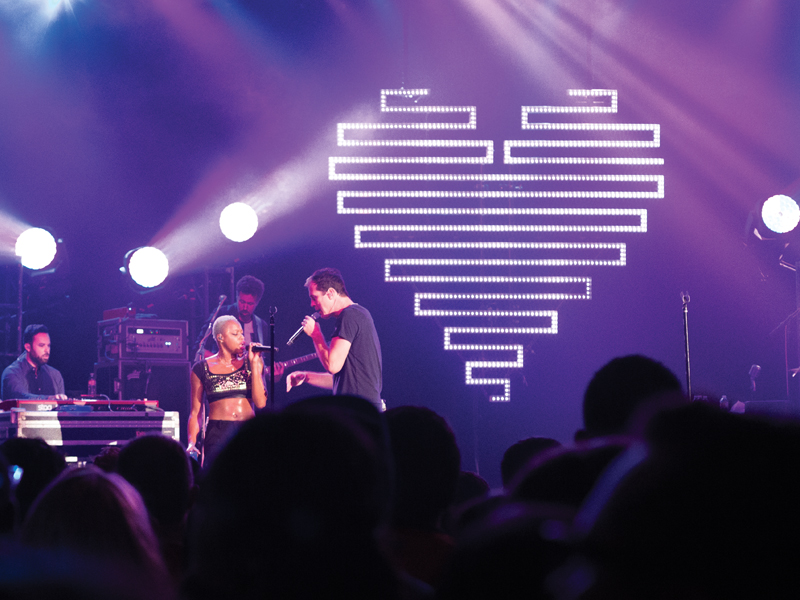 Late Saturday night, downtown Riverside. It’s the usual feel I’ve come to expect from the city — even on a weekend night, there’s not much going on. The streets are for the most part empty — except for a noticeable hub of noise and activity near the corner of Lemon Street and Mission Inn Avenue. It is here the Riverside Municipal Auditorium is located, and where the night’s main attraction, a Fitz and the Tantrums show, is happening. And that night, for those quiet downtown streets, it was indeed what was on the inside — rather, what was happening inside — that counted.

Late last year, it was announced that the promoter Live Nation was taking over the Fox Performing Arts Center and the Riverside Municipal Auditorium. This came as a huge boon for the relevancy of the two venues — in the past, while still serving as adequate places for events that were held there, the venues mostly housed shows for legacy artists, big-time cover bands and other shows aimed at a largely older demographic. Live Nation coming in signaled a turn toward the modern for the sites. While still hosting some older acts — Social Distortion played there this summer, and upcoming performer Larry the Cable Guy skews toward the older crowd — Live Nation’s involvement is also bringing more current and student-friendly acts (such as Cherub and Dropkick Murphys) to the table. There’s something to be said about their and Ticketmaster’s stranglehold on ticket sales, but that’s a discussion for another time.

One of the first shows to hold major relevance to students (and very well-timed with the beginning of the school year), was Fitz and the Tantrums. Bringing a current alt-rock radio mainstay, whose hits “Out of My League” and “The Walker” have been unavoidable (you’ve probably heard them even if you don’t know them by name), brought Riverside concert-goers out in droves to sell out the Riverside Municipal Auditorium. Lines stretched long around the corner, bringing the untapped market of the Riverside concert community to the forefront.

Though no opener was listed on advertisements or the ticket, when the lights dimmed at about 9 p.m., it was not Fitz and the Tantrums that took the stage. Introducing themselves as B Plan, the band for the most part entertained and pleased, falling somewhere between the sound of Generationals and Foster the People. “Hello, Riverside!” the lead singer bellowed to the semi-crowded room. For a moment, my ears were surprised — it was a typical phrase to concert crowds, but I’m so used to hearing “Hello, Los Angeles!” or the occasional “Hello, Pomona!” or sometimes just, “Southern California.” But this was something different. His repeated references to the crowd of Riverside kept reminding me that I was in my city. Not that LA is that far away, but this show was specifically for us.

In the 30-minute wait between B Plan and Fitz and the Tantrums, the room slowly started to swell, and minutes before the show there was hardly any room to move. The lights dimmed, and the opening notes of “Get Away,” off the group’s 2013 album “More Than Just a Dream,” exploded into the room. Frontman Michael Fitzpatrick and frontwoman Noelle Scaggs immediately became the center of attention, as their soulful vocals and simple-yet-sensual dance moves made it hard not to bust out in your own dance. Yet for a little while, the Riverside crowd had a little trouble. The crowd appeared a little stiff for a small amount of time, as if they weren’t used to going to shows where you supposed to move more.

By the time the third song, “Break the Walls,” and its chant-along chorus, came around, however, the crowd was moving as fast as the flashing lights on the giant electronic heart behind the band. Later in the show, Fitzpatrick would comment on the fact that you can’t be a wallflower at their shows, and encouraged the audience to look away from their phones and dance. The energy of the rooms reached new heights as the band broke out into an inspired, upbeat cover of the Eurythimics’ “Sweet Dreams,” (having the crowd loudly chant back the “moving on!” part of the song), before busting into one of the aforementioned hits, “Out of My League.” What once seemed like a fairly quaint or stiff crowd had long since diminished that notion, with already-deafening cheers reaching new levels as a dance party broke out on the floor. The band kept it going throughout the rest of the performance, having the entire audience hold up phone flashlights at one point, and thanking the crowd, with Scaggs and Fitzpatrick talking about how this was basically a hometown show for the Los Angeles band, and thanking the audience in convincingly genuine fashion “for being real people and loving real music,” before ending the show with a pink confetti and flashing-light infused edition of the “The Walker.”

What Fitz and the Tantrums brought was something that Riverside has truly been missing — a concert scene that makes people want to come out every night. The energy the band brought being eventually matched by the crowd shows the potential of a blossoming Riverside music and concert culture. We can only hope that crowds and bands can match this level in the future, hopefully reaching what used to be out of our league — and put more Riverside shows on the map.