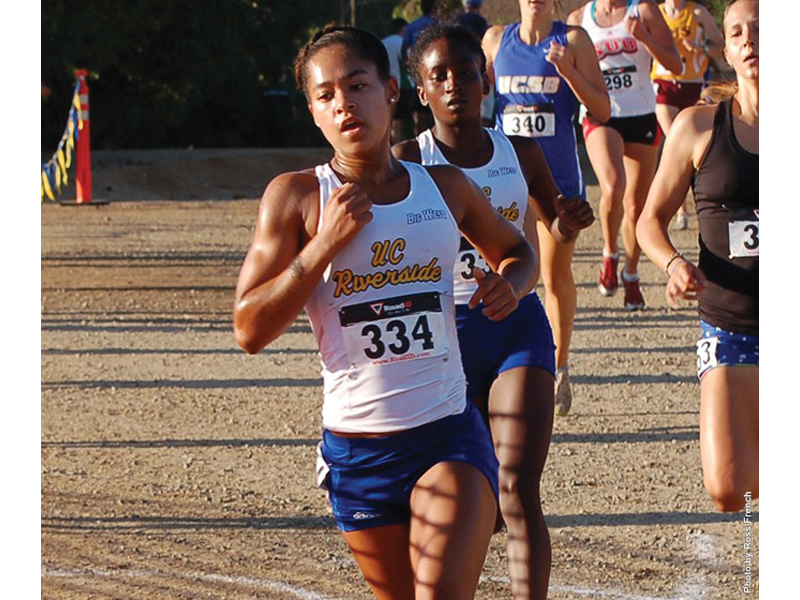 The men’s cross-country team is ready for the long course ahead with two runners placing in the top ten in their last two invitationals. At the 5-kilometer College/Nevada Twilight Classic on Aug. 29, the team finished second, trailing only UCLA. Cody Jordan and Seth Totten placed fourth and fifth. During the 34th Annual UC Riverside Invitational at the Agricultural Operations field on Sept. 13, the Highlanders placed fourth out of 29 squads. Totten was again UCR’s top finisher (fourth), followed by Jordan landing in seventh. Totten again shined for the Highlanders in the Stanford Invitational on Sept. 27. The redshirted senior finished seventh overall out of 361 runners, helping the university place ninth out of 17 teams.

Senior Raquel Hefflin is leading the pack for the UC Riverside women’s cross-country team this season. Starting the season at the Nevada Classic, Hefflin set a course record with a time of 14:06 for the 4-kilometer run, marking her second career individual win with a hefty lead of 23 seconds. In the team’s second race at the 34th Annual UC Riverside Invitational, Hefflin was only eight seconds behind the winner and only two seconds behind her personal best for the 8-kilometer. The senior finished second in the 6-kilometer Stanford Invitational, trailing the winner by only eight seconds (20:39). Her three top finishes earned the Compton native a spot in the Sept. 15 issue of Sports Illustrated as one of six runner “Faces in the Crowd.”

The UC Riverside women’s volleyball team got off to a rough start with a 2-10 record entering the Big West games Saturday against nationally ranked Hawaii, which concluded with a three-set loss. The only two wins they have achieved this season were in Utah against Maryland-Eastern Shore and Savannah State. The two wins over summer have already tied the amount of total wins for the team last season (2-26). Seniors Tyler Dorsey and Megan Reza along with Bri Holmes were named to all-tournament teams during the non-conference schedule.

The UCR men’s soccer team is hoping for a serious turnaround with a 1-6-1 record, with their season opener as their only victory. The team’s game against San Diego went 0-0 for 110 minutes and was a much-needed break from losses in the final minutes of the games. UCR has been able to score for half of their games, but defense in the end seems to falter, ending in losses. The Highlanders hope to come back from a disappointing weekend in Las Vegas with some victories starting against Sacramento State on Oct. 2.

UC Riverside’s women’s soccer team is having a solid season thus far with a 5-2-2 record. The squad opened the season with two consecutive wins and a tie before being crushed by nationally ranked USC, 1-8. The Highlanders rebounded with two solid victories against Bakersfield and Northern Iowa. With only eight games in, ten players have been able to score goals and the team will look to reach the Big West Championship game once again. The team will begin Big West games starting on Oct. 2 against UC Davis.