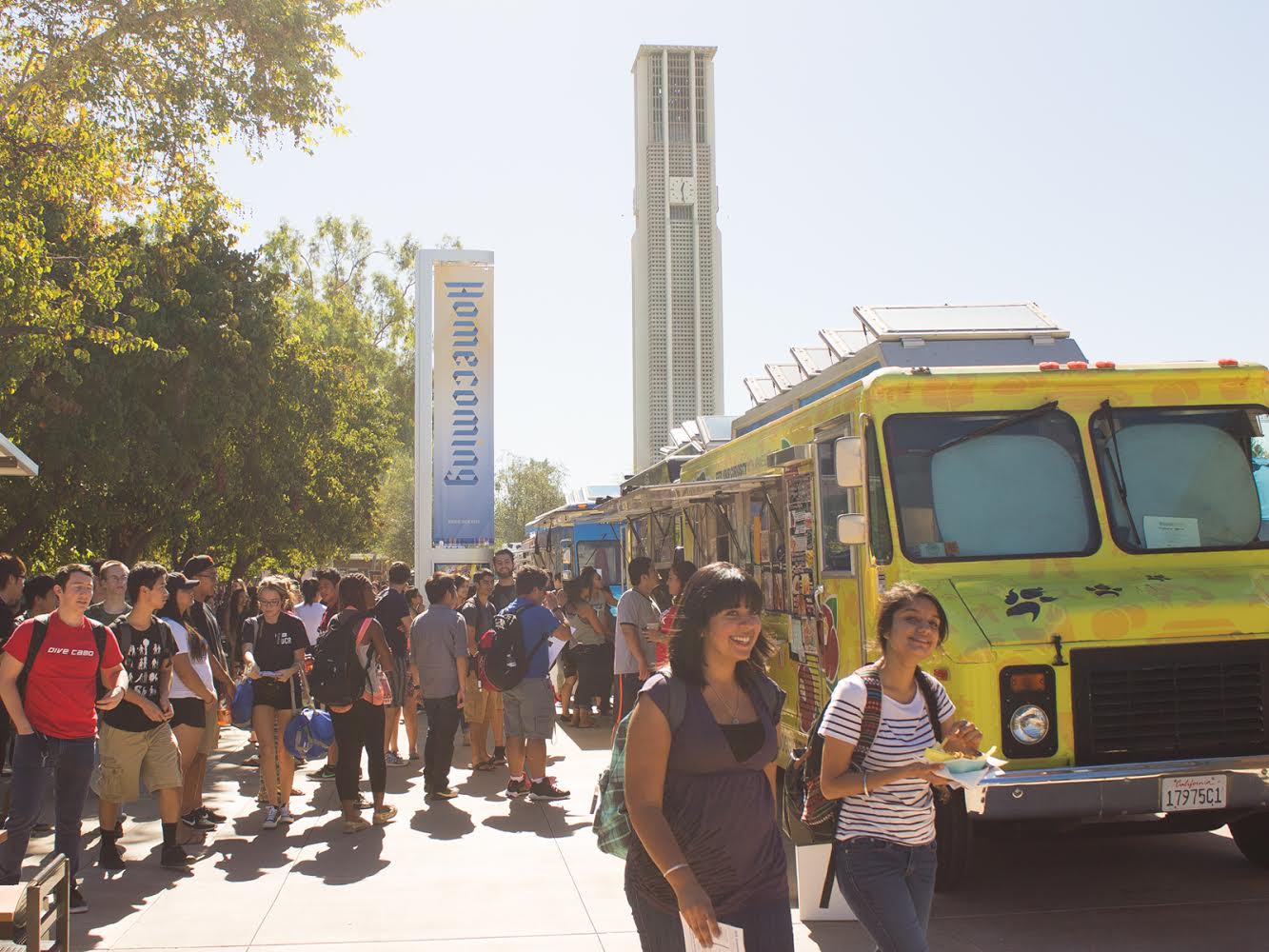 Dozens to hundreds of people were gathered around the Bell Tower and the accompanying lawns at the Rivera Library to welcome the meals-on-wheels of UCR’s semi-annual Food Truck Festival. Last held during spring quarter, the festival came at an earlier date this year, and looked to improve upon the suggestions and complaints that had been generated during ASUCR’s previous two showings. Bringing back the old classics, students were allowed once more to twist up their lunches at the Tornado Potato truck, deliver a delicious punch to the arteries with Baconmania and revel in the taste of Belgium with Waff-n-Roll. Additionally, students were treated to an even larger selection of trucks with newcomers Angie’s Wieners, MexiCalbi, Baby’s Badass Burgers, Me So Hungry and more. As the crowds swelled and moved from one truck to the next in an effort to find their exotic mobile lunch, one couldn’t help but be overwhelmed by the sheer plethora of choices.

Sporting somewhere around 30 food trucks, the festival managed to mitigate many of the issues with line length that occurred last spring. While not dissipated entirely, the lines at this festival were of a much more manageable length than those of last year, which saw students standing for so long on the grass that some began resembling lawn gnomes. The wait was further assuaged by the Dia de Los Muertos performances that were going on as part of the Nooner series at the Bell Tower. Playing Mexican-styled music, presenting traditions not normally practiced north of the border and offering calavera face paint, the Food Truck Festival had a truly convivial atmosphere.

With the additional trucks for this iteration of the festival, many made a showing closer to the actual HUB, as trucks parked from the edge of the Coffee Bean and ran to one end of the lawn in front of the Rivera Library. (Oddly entertaining, however, were the four outlying trucks on the other end of the lawn, adjacent to Olmsted Hall.) On the lawn itself, students sat in the shade eating their recently purchased food and making general comments that food was nice and made for a nice change from what was presented on a daily basis at the HUB.

Jacob Devereux, a fourth-year creative writing major, mentioned that he thought the festival “is very fun,” and stated over his plate that “The sushi from Let’s Roll It was very delicious.” He went on to note how entertaining two newcomer trucks, Angie’s Wieners and Baby’s Badass Burgers, were.

On the positive feedback that seemed to be coming out during the event, UCR Dining Services’ Director of Retail Services Duane Gornicki stated that this was the “largest endeavor to date” to bring out food trucks to UCR. Additionally he mentioned that ASUCR — with the support of Dining Services — “took the concerns of students last year, festival number two, that the lines were too long and they couldn’t get the food they wanted to; so, we thought this year by adding more trucks that wouldn’t happen.”

I decided to wade into the fray of diesel and fries to taste some of what the food trucks had to offer. First on my list was the truck named Baby’s Badass Burgers, as I hoped to see whether the food quality earned its name, and whether it was worth anybody’s time to make the trek away from the rest of the trucks and to the far side of Rivera Lawn with so few trucks. The triple-B was quick to make sure everyone knew it was running on a limited menu, covering the regular one with a sign and replacing it with a chalkboard sporting merely four burger options. In an effort to stay healthy and fairly cheap, I ordered one of the least expensive burgers, the $9 Covergirl (a turkey burger to maintain my svelte figure).

The festival was quick to deliver on its promise of shorter lines, and I waited a relatively short 10 or 15 minutes to get my burger, treated in the interim to one of the cook’s renditions of Pokemon’s opening theme song (the OG theme song too). Hearing my name called, I grabbed my food and drink and found a spot to eat, enjoying the ever-present music celebrating the Day of the Dead. Finally I looked down at my burger and already knew what to expect. The turkey patty appeared to be the frozen kind you would find at Stater Bros., but I’m no Gordon Ramsay, so I gave it the benefit of the doubt. It was a solid burger, no more, no less. Unfortunately, good isn’t good enough when you have to go out of your way to walk to the truck and pay twice what a burger should be worth.

After this came the So Cal New Orleans SnoBalls truck. Aside from its unique choice of name, the New Orleans-style snow balls the truck was selling actually managed to be worth the considerable wait. Ordering the $7 tiger blood snow ball — as it went so well with my Adonis DNA — I found that this food was essentially a snow cone with the added benefits of condensed milk. The effect? A surprisingly creamy dessert food that went great with the hot midday sun.

Considering the greatly ameliorated lines and post-order wait times, the question as to whether people enjoyed the food truck festival essentially boils down to whether the novelty is worth the venue’s asking price. With next year promising a slight decrease to something closer to 28 trucks in an effort to recentralize the festival and keep compliance with fire safety mandates, the occasional chance to splurge on something other than the food regularly offered at UCR seems only more and more appealing.