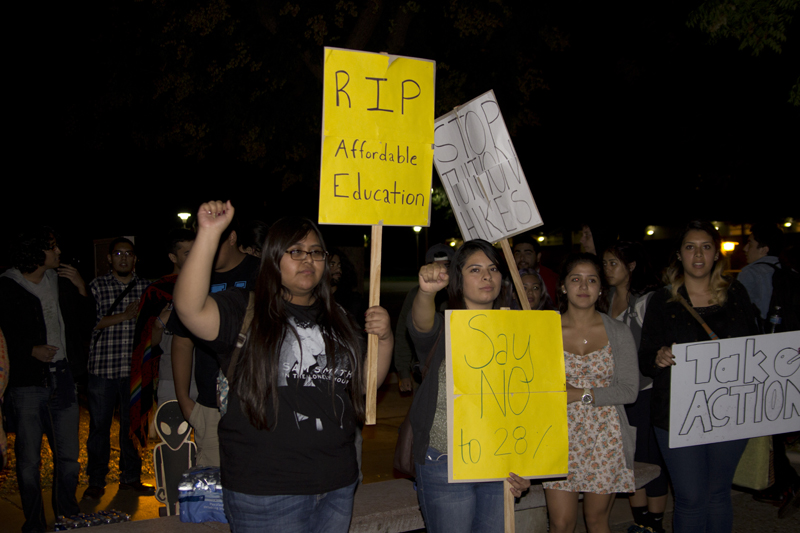 According to United Auto Workers Union (UAW) Local 2865 Recording Secretary Irene Morrison, the decision to move to Hinderaker Hall was a spontaneous one. ASUCR Vice President of Internal Affairs Fernando Echeverria identified the crowd standing outside Hinderaker Hall as between 150 and 250 people.

After several minutes of chanting “Where is Wilcox?” outside Hinderaker Hall, Wilcox came out to address the protesters.

“First, nobody likes to raise tuition, myself included,” Wilcox said to the riled-up crowd. “But costs go up. And so the question is: How do we pay for those costs?” In response to several members of the crowd heckling him, an agitated Wilcox shot back, “I can talk or not talk; you can choose.” When the crowd continued, Wilcox returned to his office.

In response to Wilcox’s departure, ASUCR Vice President of External Affairs Abraham Galvan addressed the crowd: “Look, you all don’t need to be disappointed by this because we all knew this was going to happen,” Galvan said.

The protest then moved inside Hinderaker Hall as the group moved to the fourth floor and occupied the hallway outside Wilcox’s office. Chanting, “Hey hey, ho ho, Napolitano has got to go,” and “UC, UC, you’re no good; treat your students like you should,” the protesters vowed to stay until their demands were met. At around 4 p.m., ASUCR Outreach Director Jessica Urquidez addressed the protesters, urging them to consider their course of action should the UCPD require them to leave. A majority of protesters vowed to continue the sit-in despite the potential of arrests occurring. Although UCPD entered Hinderaker Hall around 5 p.m., administrators announced that the protesters would be allowed to stay until 9 p.m. After debate over how to best continue their fight, the last 28 students left Hinderaker Hall at 7:45 p.m. As of press time, UCPD has yet to respond to a request for comment.