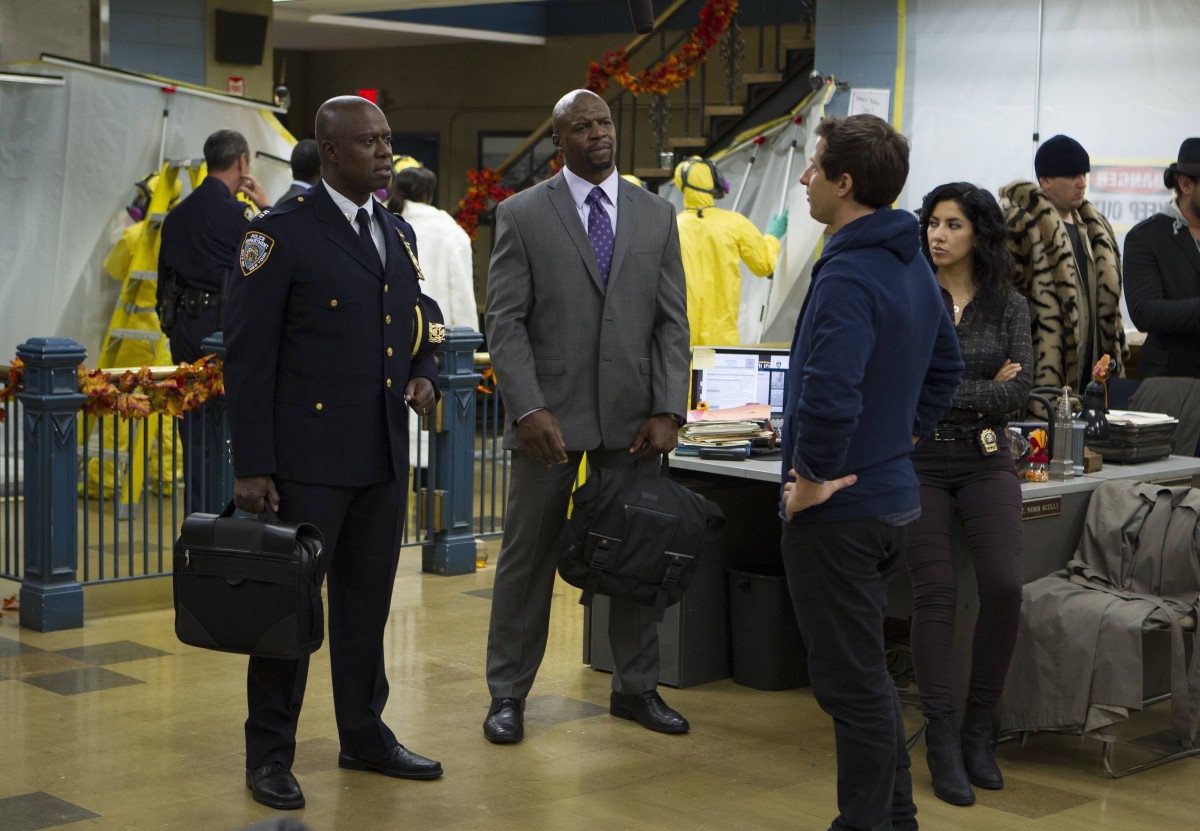 At the risk of hitting the point too hard, “Brooklyn Nine-Nine” really needs to fix its problem with Jake Peralta (Andy Samberg). The fixation on Jake has been a theme throughout season two, and “Lockdown” is no exception, which is unfortunate because the episode brings the ensemble together in a way that we haven’t seen a lot of this season. Because the show works best when the ensemble is given a chance to shine, “Lockdown” feels like a missed opportunity.

Although airing a week and a half before Thanksgiving, this is this season’s Thanksgiving episode. Last season, we were treated to “Thanksgiving,” in which the detectives were all invited to Amy’s (Melissa Fumero) house for dinner and chaos ensued. “Lockdown” — I suppose I should be thankful it isn’t called “Thanksgiving II” — feels more like a trick. No, wait, that’s the wrong holiday.

“Lockdown” is a bottle episode, where the main cast of a show is restricted to only a single location. In this case, the major location for the episode is the precinct, which is put under a biohazard lockdown after a package of white powder is dropped off. The only members of the precinct not under the lockdown are Terry (Terry Crews) and Holt (Andre Braugher), who left early for a charity event. Oh, and there’s also Hitchcock (Dirk Blocker), who’s trapped on the balcony, rather than in the squad room with everyone else.

Bottle episodes often focus on characterization and can be among the best in a series — see “Cooperative Calligraphy,” known as the bottle episode of “Community” — so if you’d told me “Brooklyn Nine-Nine” was going to do a bottle episode, I would have been ecstatic. Unfortunately for the precinct and the audience, Jake is the acting captain because he’s the only one who doesn’t have Thanksgiving plans, and he isn’t prepared to take the job seriously.

When they find the powder, which everyone is concerned could be anthrax, Jake’s attitude doesn’t change much. He has a hard time with his new responsibility and keeping the precinct, including criminals, civilians and lawyers trapped inside, calm because of a reluctance to take charge of the situation. There’s frustratingly little direction in “Lockdown” since the fact that Jake needs to actually act like a captain is the only point it wants to hit, and this can’t happen until the end of the episode. The situation continues to escalate as first the non-detectives demand food, then heat, then to be let out of the precinct, and the only other detective who seems even the least bit worried is Amy. Everything serves to make this one incident worse, and they all kind of just allow a riot to happen.

After the civilians set a couch on fire, Jake — after a little pep talk from Amy — steps up, and the situation is taken care of handily. It’s so easy that you can see why Jake couldn’t have taken over any earlier. If he had, everything would have been okay, and “Lockdown” would have simply had no other place to go. In an episode that brings the ensemble together, there’s no bonding or shared moment. It’s only about teaching Jake a lesson, and that’s not okay on a show like “Brooklyn Nine-Nine,” which is ostensibly an ensemble comedy.

Fortunately, the Holt and Terry plotline is better, at least in part because we get to see Holt bounce on a yoga ball, which is by far my favorite part of the episode. To monitor the situation in the precinct, Holt and Terry stop their drive to the charity event and go to Terry’s house to use his home office. However, since it’s Thanksgiving, this requires Terry to deal with the brother-in-law he hates — last seen in season one’s “48 Hours” — because he calls him “Tiny Terry.”

When his brother-in-law mistakenly thinks Holt is a mean boss, Terry finds himself bonding with the man for the first time, and he decides to keep up the charade. It’s the most Thanksgiving aspect of the episode, since dealing with relatives you may not like is part of the holiday, and I liked seeing Terry’s surprise at the fact that he and his brother-in-law could get along.

In the end, this plotline suffers from a lack of an ending. Terry and Holt return to the precinct, but before they do, Terry asks Holt to pretend to be as mean as he claimed his boss was to preserve the newfound bond between him and his brother-in-law. Not only do we not get to see this scene, but the rest of the plot appeared to be building in another direction. When Holt yelled to Terry that his request for Holt to play mean was stupid, instead of whipping Terry back into shape, the plot fizzles out to allow Terry and Holt to return to the station for one last Jake joke.

And that’s the ultimate lesson for me from “Lockdown” and from season two of “Brooklyn Nine-Nine” as a whole: Everyone else will come second to Jake Peralta. I don’t hate or even dislike Jake — though that may be hard to see in these reviews — but I would like him better if the writers understood that he should not be the center of the show. He’s a fine character when he is just another member of the precinct, but until “Brooklyn Nine-Nine” figures that out, we’ll continue to have episodes like “Lockdown” and many others this season where Jake is the star and everyone else simply falls by the wayside.