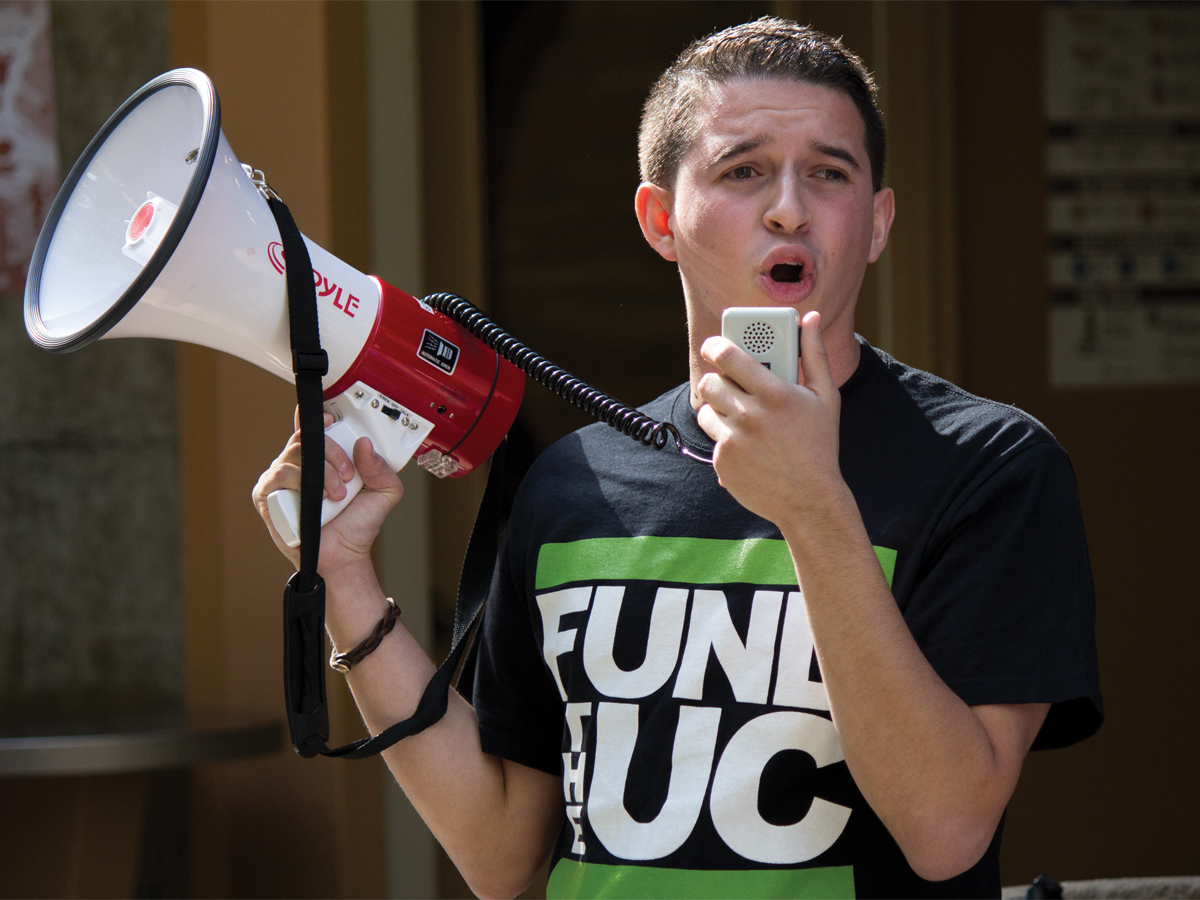 Nearly 150 to 250 UCR students turned out for a protest on Nov. 18 as part of a systemwide “Day of Action” in response to UC President Janet Napolitano’s proposed tuition plan, which was voted on and approved by the UC Board of Regents two days after.

Organized by the ASUCR Office of External Affairs, UCR’s protest and class walkout began at 11:15 a.m. at the Bell Tower and made its way to Hinderaker Hall, where it developed into an unplanned sit-in outside Chancellor Kim Wilcox’s office that lasted until about 7:45 p.m.

At the Bell Tower, students voiced their concerns about the tuition plan amid chants of “Fund the UC!” and “UC, UC, you’re no good, treat your students like you should!” Second-year student Melissa Marquez stated that the tuition hike “would make education almost unattainable” for her, and that if it passed, she would “probably consider withdrawing.” Second-year linguistics major Johnson Pham held similar sentiments. “Sometimes, I have to buy textbooks over eating,” he said.

Openly advocating in support of the tuition plan, Wilcox came out to address the protesters after they marched to Hinderaker Hall and demanded to see him. In response, ASUCR Vice President of External Affairs Abraham Galvan demanded an explanation for why he has “directly opposed” students regarding tuition. Wilcox said that while he did not want tuition to be raised, “costs go up … we have to decide how we’re going to pay for the costs.”

Wilcox’s recent salary increase was also a topic of contention for students, which Wilcox countered, saying that his salary was “set by the (UC) Board of Regents and (Napolitano)” and is set “in comparison to the market.” Wilcox returned to his office after being repeatedly interrupted.

Shortly thereafter, the demonstration moved to and remained at the fourth floor of Hinderaker. At that time, Executive Vice Chancellor and Provost Paul D’Anieri and Vice Chancellor of Planning and Budget Maria Anguiano addressed student concerns. Topics covered included: what the tuition increase would fund; the possibility of cutting programs without an increase in funding; and the alleged lack of transparency behind the announcement of the tuition proposal — occurring less than two weeks before its scheduled vote.

D’Anieri promised that a goal for next year’s budget would be “to make it more transparent,” and Director of Media Relations Kris Lovekin stated later that a third of the revenue from higher tuition will go to financial aid, and that the rest “will be used to pay salaries, build buildings, open labs, furnish classrooms and all the other necessary costs of operating the university.”

While the plan does promise to invest in improvements for the UC, many students are not impressed. “You can’t invest in what you don’t have,” said third-year Sarah Belknap, who is worried that many students “don’t have (the money) to pay in the first place.” Fourth-year Valencia Youkhanna agreed. “The only thing I see is a number at the bottom of my GROWL account,” she said.

A couple of hours into the sit-in, third-year Neftali Galarza articulated the protesters’ demands, which included that Wilcox withdraw his support for the proposal and issue a formal apology to the campus, that Wilcox take a voluntary pay cut, and that the regents “reject the proposal and work towards identifying alternatives.” Thus far, these demands have not been met.

Assistant Vice Chancellor for Strategic Communications James Grant, who was present for part of the protest, expressed his own trepidations later in an interview. “The choice the university faces is to slip toward mediocrity, or maintain the quality and great value of a UC education,” he said, echoing the sentiments of many other administrators.

Since UCR buildings close at 5 p.m., UCPD officers entered Hinderaker due to concerns that protesters were trespassing. Administrators later announced that protesters could stay until 9 p.m.; however, the remaining 28 students voluntarily left the building at around 7:45 p.m. “In this case, students were peaceful and no arrests were necessary,” said UCPD Assistant Chief of Police John Freese, adding that “we definitely understand the need to allow for protests on campus.”