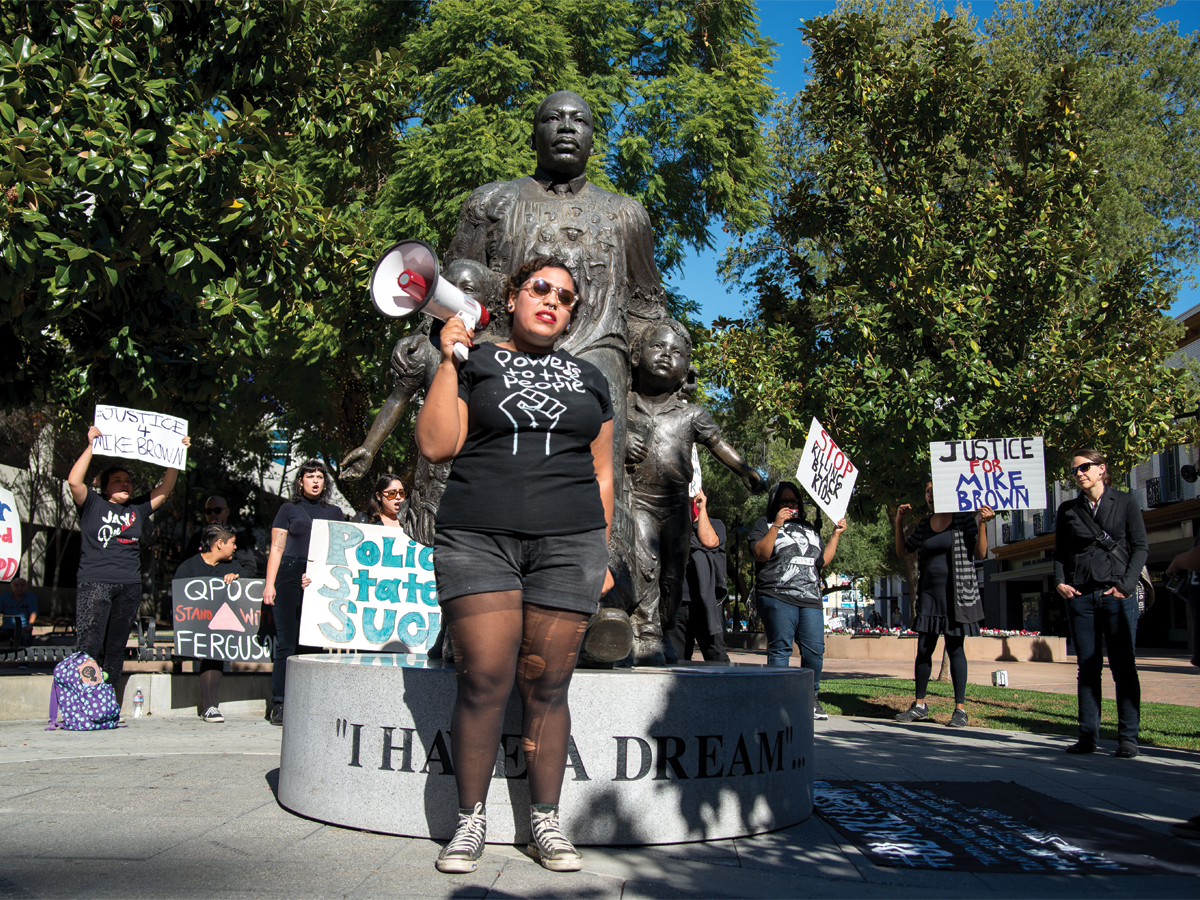 Nearly 40 community members came out to condemn the non-indictment ruling of Darren Wilson, a white police officer who fatally shot Michael Brown, an unarmed African American man near Ferguson, Mo. back in Aug. 2014. Announced nearly one week ago, the ruling has continued to spark ongoing and sometimes violent demonstrations throughout the nation.

Located in front of the Blood Orange Infoshop in Downtown Riverside, the Nov. 26 event was organized by the Guerillera Collective Inland Empire, a community organization that provides a safe space to talk about issues of race and gender.

“I believe police violence is an epidemic in this country. Innocent people, especially black youth, are targeted and killed so frequently by cops who almost never even get put on trial, let alone charged for murder,” explained second-year UCR student Arman Azedi, who was one of 176 people scheduled to attend, according to the Facebook event page.

Starting from University Avenue and moving through parts of Downtown Riverside, the protest drew allies from various local organizations such as Anakbayan Inland Empire, a chapter of a national youth organization dedicated to educating, organizing and mobilizing members around issues that affect the Filipino community.

UCR 2011 alumna and Anakbayan representative Nicole Dumaguindin felt deeply concerned about African American youths and their struggles in relation to those in the Philippines. “Filipino youth and black youth are being targeted and murdered by the state (with) a culture of impunity — no justice for the families and no victims of state violence,” she said. “Justice for Michael Brown … is not going to be one in the courts, but in the streets and by the people.”

Wearing black as a sign of solidarity, protesters also waved signs, including one that said, “Ayotzinapa, Palestina, Ferguson mi barrio y tu barrio (my town and your town).” Guerillera Collective Inland Empire organizer Paolo Alcala explained that the underlying connection between each cause was the “dehumanization of darker people.”

“In Mexico, the gap between light (and dark) skinned Mexicans is really visible and people who have power and tend to be wealthy are light skinned,” with the same principle applying in the United States, she expressed. Alcala emphasized that the Ferguson protest was more of a “black issue” but still fell along the same spectrum of the other causes.

Making a temporary stop at a Martin Luther King statue, protesters made their peace about the verdict and what it represented. “It personally made me sick to my stomach. I didn’t know what to do. I was lost,” expressed Moreno Valley resident Matthew Young. In regards to the media coverage of other, more violent protests occurring around the nation, Young said, “You can’t speak to people flipping cars and burning shit up (but) if you’re sitting on your ass … if you’re not going to come out to a peaceful protest, then they can’t say shit about an unpeaceful protest.”

Some violent aspects of the after-verdict announcement were the torching of nearly a dozen buildings in St. Louis County. Recent protests have included a “die-in” (a demonstration in which people lie down as if dead) at the Missouri Mall and other ones that also blocked the U.S. 101 freeway. The ongoing protests continue to exemplify the existing racial tensions between a predominantly African American community against a mainly white police force in Ferguson. Out of the 53 commissioned police officers in the city, only three are African American.

“It’s important to take a look at our society and have a critical eye in the role of law enforcement … and look of color is critical,” said former UCR Director of the Lesbian, Gay, Bisexual and Transgender Resource Center Maggie Hawkins, who heard about the event on Facebook.

“I think it’s young people that are dying when those kinds of situations happen and I think that’s why young people need to be involved because it’s directly affecting their lives and people in their communities,” Hawkins added.

With the non-indictment ruling affecting various communities, Wilson recently announced his resignation from the Ferguson police force. “I have been told that my continued employment may put the residents and police officers of the City of Ferguson at risk, which is a circumstance that I cannot allow,” reads Wilson’s resignation letter. “It is my hope that my resignation will allow the community to heal.”

Contributions made by Aaron Grech