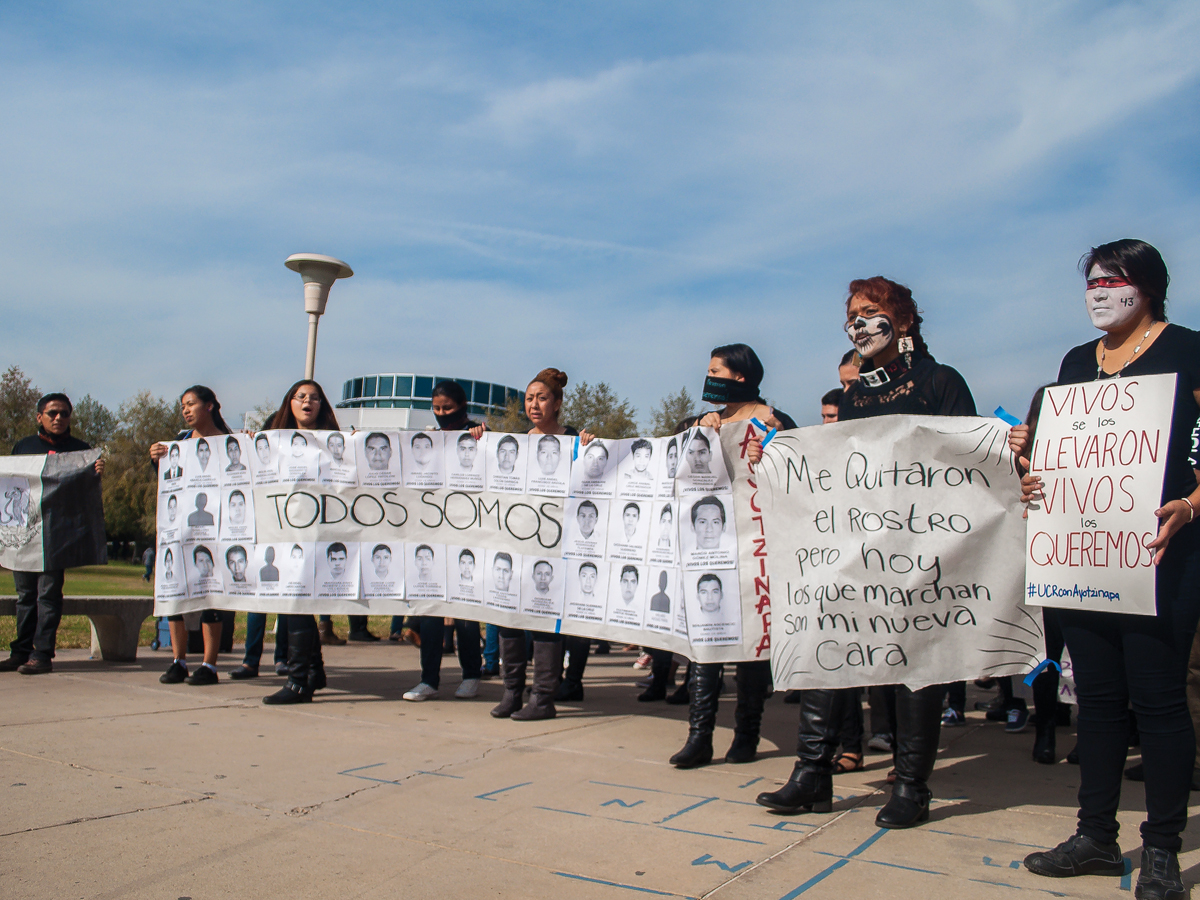 The students, traveling from Tixtla to Iguala, planned to hijack buses for a protest when Iguala’s mayor Jose Luis Abarca allegedly sent police forces to take them into custody. Afterward, the students were turned over and believed to be killed by local drug traffickers with ties to the mayor, according to Mexican authorities. Currently, many are outraged over the federal authority’s delayed response to and local police involvement in the disappearances.

M.E.Ch.A, along with organizations such as United Students Against Sweatshops (USAS) and Raza Assembly, drew over 50 students during the events, which included guest speakers and a march around campus. UCR students were encouraged to wear white wristbands as a sign of hope that the missing students will still turn up.

During the march the students shouted, “Vivos los llevaron; Vivos los queremos!” translating to “They were taken alive; we want them back alive!” and other chants heard across campus.

UCR history graduate student David Sanchez encouraged students to be more mindful about policies that may support the shipment of arms from the U.S. to drug trafficking groups, which creates a cycle of violence. “We as UC students need to be informed of neoliberal policies which affect these events, and question UC contracts and divest from those companies who profit off of this cycle,” Sanchez stated.

Students highlighted the impact of international crises on a domestic level. “Their (students’) families could be fleeing the violence that is occurring in Mexico and (the UC system) should be aware that it is one of the reasons people are coming over here,” stated Jovana Hernandez, a M.E.Ch.A organizer and a fourth-year sociology major.

“As a UC, it is a privilege to stand in solidarity, to be able to even say those words is a privilege that those students did not have. Those students were silenced by their government,” Jessica Urquidez, ASUCR outreach director and fourth-year student, stated after the protest.

The demonstration was one of many occurring across many universities and cities in both Mexico and the United States, as outrage over the violence and disappearances have increased since the country’s 2006 War on Drugs began. From 2006 to 2013 there have been over 100,000 deaths, and over 27,000 disappearances in Mexico.

There is still controversy over whether or not the 43 students are alive, as the bodies discovered so far are said to not match the students’ DNA.