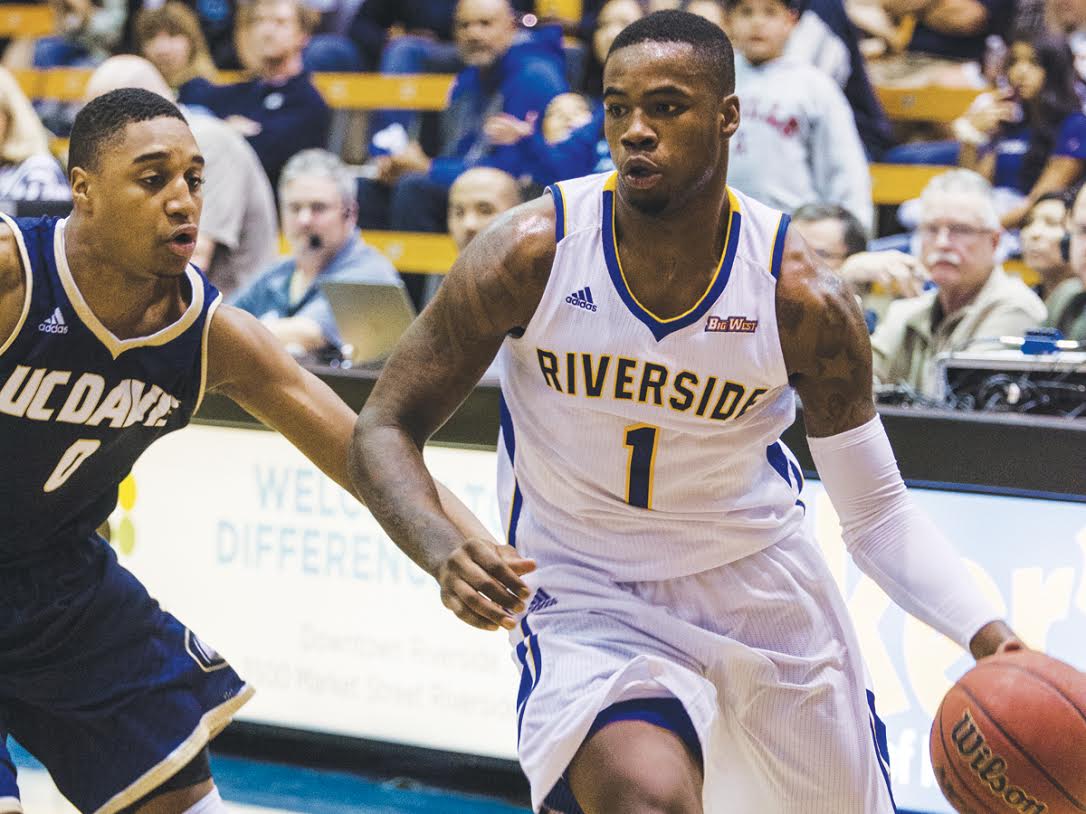 It was the Highlanders versus the Aggies in a Big West conference showdown on Thursday night at the Student Recreation Center Arena. Despite 29 points from Jaylen Bland, UCR fell, 74-61.

UC Davis’ defense was on track for the first half and did not allow UCR to score a single three-pointer the entire half, while their offense was equally as powerful by making 71.4 percent of their shots from beyond the arc. UCR was not even able to get onboard until Davis scored their first five-points and gained a lead they would not relinquish.

After the first half, the leading scorer of the game was Steven Thornton with seven points, followed by Bland and Taylor Johns with four. The score was 33-21 and UCD would gain another five points before UCR responded with the first three-pointer of the game from Bland.

UCR began to make some momentum with Bland knocking down several three-pointers. The Highlanders’ offense stepped up and with 8:43 left in the game, Davis’ lead was cut down to four. However, three minutes later, Davis would enter double digits and keep it for the rest of the game, 74-61.

Bland went on to score five more three-pointers in the game and end the game with 29 points. Thornton was the only other player to have double-digits in points for UCR with 10, followed by Nick Gruninger with seven.

The Highlanders won a hard-fought battle against the Hawaii Rainbow Warriors. Despite struggling with offense for the first half, Riverside picked it up in the second half and came back with a 66-62 win.

UCR had plenty of opportunities to score during offensive possessions in the first half but due to poor ball-handling skills, they gave Hawaii the chance to take advantage. The Highlanders only knocked down 38.1 percent of their shots from the field and 33.3 percent of three-pointers. However, despite the rough stats, a Taylor Johns dunk with five minutes remaining cut UCR’s deficit to single digits, 29-21. Scores from Bland, Thornton and Gruninger cut the halftime deficit to three points, 31-28.

With another three-pointer from Thornton, his 16th point of the game, UCR gained the lead for the first time since the fourth minute of the first half. They would enter the final stride at the 1:19 mark of the game with a 61-58 lead the Rainbow Warriors could not come back from.
Stefan Jankovic had a close attempt with his two free throws to possibly make it a single-point deficit, but the Highlanders held on to finish with a 66-62 victory.

Thornton finished the game with a career-high 22 points, followed by Bland with his second double-digit game (15) of the week. The Highlanders finished converting 50 percent of their three-pointers and 55 percent for field goals.