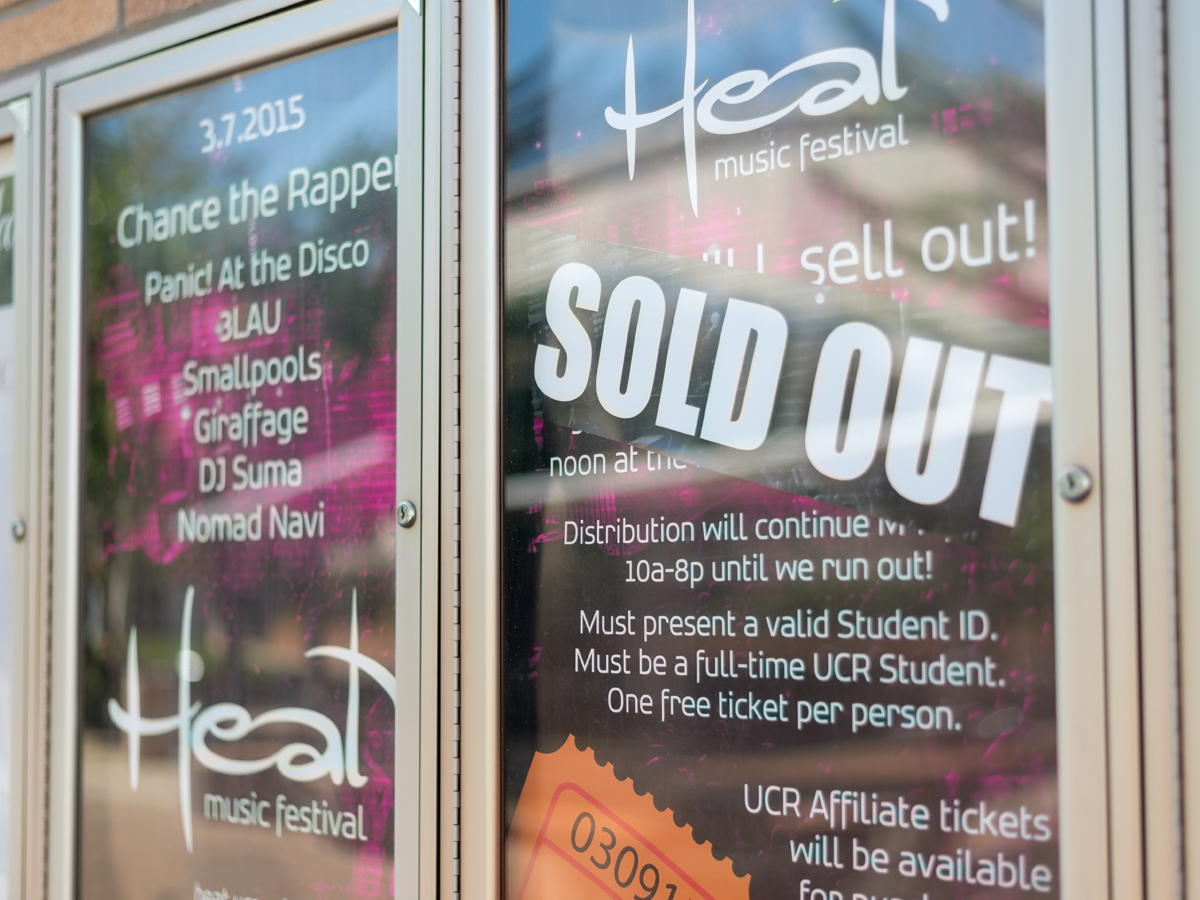 UCR Free and For Sale and UCR Craigslist are some of the few Facebook groups UCR students might turn to sell merchandise — particularly Heat Music Festival 2015 tickets, which are often resold at a higher-than-usual price. Though the Highlander Union Building (HUB) currently does not have any regulatory powers when it comes to ticket scalping, some question whether or not there should be greater HUB oversight over this illegal act.

With Chance the Rapper and Panic! at the Disco expected to perform at the upcoming Heat Festival, some students are capitalizing on big-name artists by selling their own tickets for as high as $60 apiece — more than double the going price for a guest ticket — as shown by various Facebook posts. Currently, UCR students, staff or faculty members may obtain one free ticket with the option of buying a maximum of two additional guest tickets at $28.50 apiece.

Currently, California law prohibits selling tickets at a higher price than its face value without the consent of the event sponsor. Though the HUB has provided specific terms and conditions, forbidding the resale of tickets, the board lacks enforcement powers to prevent students from selling tickets. Further input could not be obtained by the HUB as of press time.

First-year biology major Daniel Tran felt the two-ticket limit for guests was enough to hinder the effects of ticket scalping, but the overall number of Heat tickets being distributed was not enough. “I think the university needs to increase tickets given out in relation to increasing student population,” he said.

Heat has a maximum capacity of around 12,700 people — a number which has not fluctuated very much since the festival first started back in 2007, despite the steady increase in the student population, which has reached 21,297 this academic year.

On UCR Free and For Sale, third-year economics administration major Erick Campos posted, “Selling 2 Heat guest tickets for 25$ each. They’re from last year,” knowing that Heat 2015 tickets would eventually be resold. “I also thought it would be a bit comical, considering that last year’s heat was rained out,” he explained in an interview with the Highlander.

Campos felt that the HUB should require a student ticket to match the name of the student receiving it by checking their student ID. As of now, Heat officials allow UCR students to use any student ticket to enter the festival.

Though the HUB elaborates that there are no ticket refunds or exchanges in the event of an artist cancellation, many tickets were refunded after last year’s Heat festival, which was cancelled due to poor weather conditions. Director of the HUB Todd Wingate expects to be within the $500,000 budget this year.

“This is $100,000 less than the budget for 2014 and the savings were realized by eliminating the third stage which is traditionally on the Rivera Lawn and which the exception of a couple of artists a few years back, has never drawn much of a crowd,” Wingate explained.

Guest tickets that have not been claimed by March 6 will be transferred to another office in front of the Student Services Building. Students must bring their UCR ID to pick up their guest tickets. UCR students who have not picked up their student ticket may sign up on an online waitlist to be eligible for one. Students will still have a chance to win one of 25 guest tickets by entering an Instagram contest, with winners being announced on March 2.

Even though UCR student Jae Yoo was unable to obtain his ticket in time, he had planned on selling it anyway. “I don’t really go to concerts,” he said. “I think that all UCR students should get at least one though. The fact that they ran out was kinda wack.”

Students like fourth-year media and cultural studies major Kenneth Lau chose not to get a Heat ticket because he wasn’t familiar with the artists on the lineup. In regards to the resale of Heat tickets, he said, “I have mixed feelings about it,” but reasoned that, “College students are doing it cause, you know, UC tuition is expensive.”