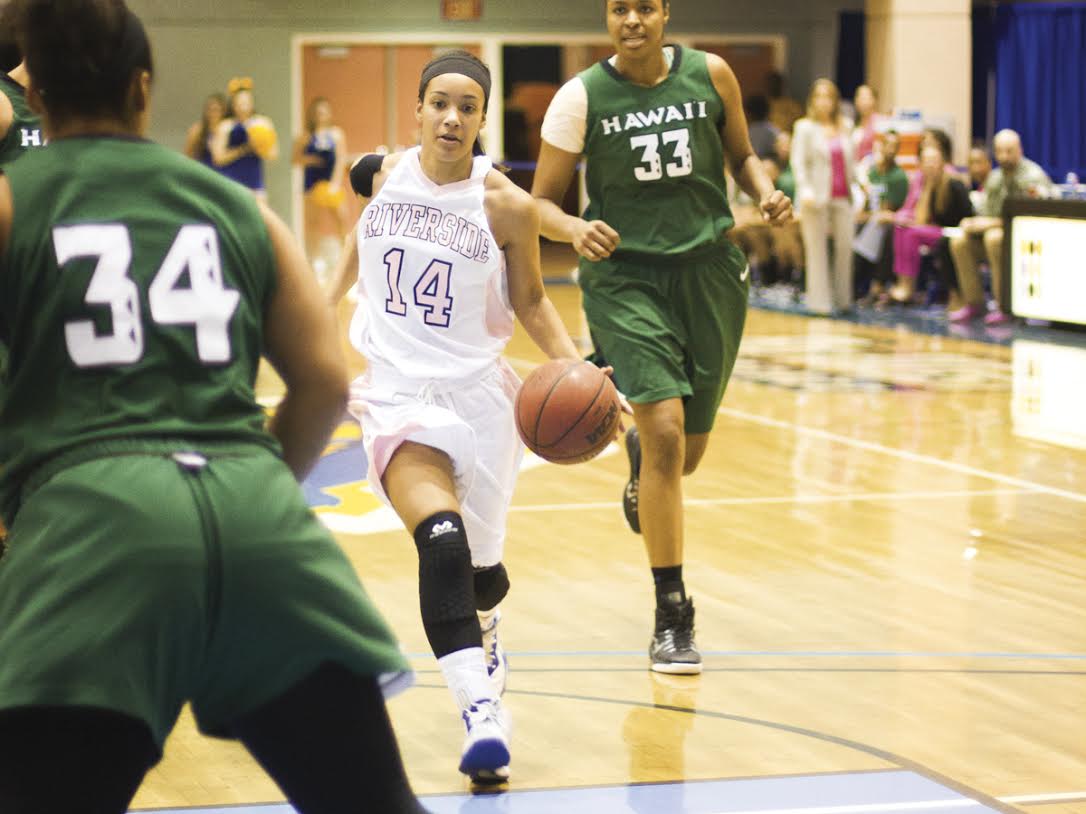 Simone DeCoud scored a season-high 22 points, but the women’s basketball team fell to Hawaii, 72-69. The Riverside native shot 47 percent from the field and converted on all six of her free throws.

The Highlanders could not overcome an off-shooting night overall despite forcing 16 Hawaii turnovers while limiting themselves to just three. Hawaii used its superior size and height to dominate the paint, out-rebounding the Highlanders 47-25 and outscoring them in the paint 36-18.

Michelle Curry dropped 17 points and Brittany Crain added 16 points on a night where the bucket seemed like a mouse hole for the Highlanders. The Highlanders shot only 38 percent from the field in the first half, as a long Hawaii defense forced them into long jumpers throughout the first period. Hawaii had multiple platoon swaps, constantly rotating players in and out, and having four-person substitutions on two occasions. This was a contrast to the Highlanders, who only subbed five players out and were mostly represented by the starters.

However, the Highlanders held a 34-31 lead heading into halftime, out-attempting the Rainbow Wahine 37-28 in field goal attempts, but only converting on one more field goal than Hawaii before the break.

The second half was hotly contested throughout, with no team building a lead greater than two possessions through the first 10 minutes of the half. Baskets were traded back and forth as time ticked on. However, Hawaii established a seven-point lead with 9:16 remaining, forcing the Highlanders to play from behind. The Highlanders always stayed in range, not allowing Hawaii to extend their lead until it grew to eight with 3:40 to play.

Scores from DeCoud and Curry brought the game to one with 1:03 to play, but made free throws and a last-second miss sealed the three-point win for Hawaii. The loss is only the team’s second of the year at the Student Recreation Center Arena and ninth overall on the year.

Visiting the Bren Events Center in Irvine, Calif., the Highlanders were led by a solid effort from Annelise Ito, whose 22 points and 12 rebounds helped keep the team energized against a persistent UC Irvine squad. Guard Brittany Crain, the Big West’s leading scorer, added 19 points but struggled from beyond the arc, converting only two of her 12 attempts from downtown.

Forward Mokun Fajemisin led the Anteaters with 21 points and added 13 rebounds in a game where her Anteaters had nine more free throws than UCR, leading to 10 more conversions from the line. In a game where every point counted, this discrepancy proved crucial.

With a 10-point cushion coming out of the locker room, the Highlanders maintained a relaxing lead, continuing to trade short runs with the Anteaters over the first 10 minutes of the second half. The Anteaters, in front of their home fans, stayed calm and motivated, keeping themselves in the game and eventually striking with a 20-10 run over seven minutes that tied the game at 59 with 2:25 to play.

The Anteater defense was stifling during this run, forcing the normally efficient Highlander offense into turnover after turnover and slowly clawing at the once-convincing advantage, taking the lead, 61-59, with 1:47 to play. The two teams traded baskets from here, until a clutch basket from Dynese Adams with three seconds to play tied the contest at 63-63, forcing the game into overtime.

The overtime period was a back-and-forth affair, with the game boiling down to the final possession, and the jumper by Onogomuho gave the Anteaters a 74-72 lead with seven seconds to play. The contest was sealed by a last-second miss by the Highlanders.