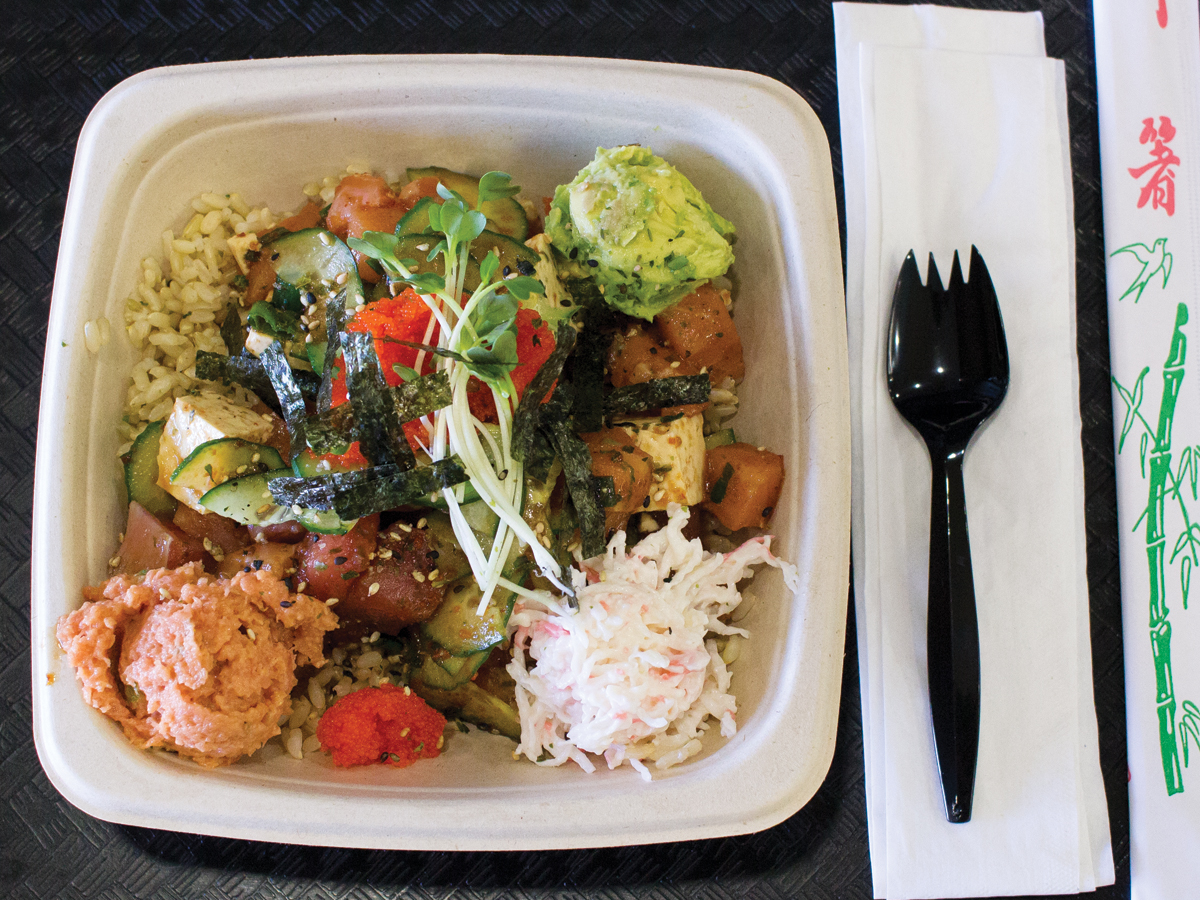 If you have never heard of poke, chances are you’ll assume it refers to either Pokemon or the physical act of poking someone; I assure you it’s neither and in fact, it’s quite delicious. A poke bowl takes all the ingredients of elaborately made sushi, mixes it in sauce and places it onto rice (or in this restaurant’s case, nacho chips is an option) to create a mixture of different textures and flavors that make up a particularly satisfying meal.

As I entered through the front of the store (don’t try to enter through the back; there’s a sign stopping you) between the windows decorated with poke bowl pictures, I noticed that the space was quite small, yet it still felt clean and open and gave off a very subtle tropical vibe. The staff members greeted us warmly as sunlight poured through the glass and complemented the interior nicely.

Small blocks of wood layered and placed in square formations decorated the side of the counters facing the guests, and wooden benches decked with bright green pillows lined the back wall. To further enhance the tropical theme, their tables contained jasmine rice underneath the glass surface, which resembled a shadow box, and were accompanied with clean white plastic chairs. The place is still fairly new, which explained the lack of wall decoration, although the tables fascinated us enough to take some focus away from the drab dark grey wall behind the benches.

A simple menu spread across the wall behind the counters adorned with raw fish and vegetables illustrates the five step process: First, a rice or nacho chip base must be chosen; second, add-ons such as onions and cucumbers are selected, followed by the third step, which involves choosing the type of seafood which included common options like salmon and tuna and a few uncommon ones like scallop and octopus. Finally, choosing a sauce like the house special, Hawaiian lava or ponzu, and more toppings like onions, avocado and spicy tuna, are added to finish off the bowl.

“All toppings are unlimited, except for the fish which depends on the size of your bowl,” exclaimed the waitress as our eyes lit up to the sound of food without boundaries ­­­­–– for once, avocado didn’t cost extra. A small bowl ($8.75) consisted of two fish selections and a large ($10.50) consisted of four, and we both opted for individual small bowls.

As I watched the workers scoop up chunks of fresh salmon and tuna into my well-anticipated poke bowl, my eyes wandered over to the wide array of toppings that I might as well order to make my bowl worth the price of around $9 (with tax). I selected the house special sauce for the sake of trying their most popular one, and within minutes of mixing, I had a deliciously and presentably beautiful bowl of salmon, tuna, avocado, cucumber, masago (fish egg), imitation crab, spicy tuna, sesame and seaweed placed before me on a tray.

Nearly too well-presented to devour, we paused for a couple of photos and dug into our meals eagerly after. Flavor after flavor was introduced to my taste buds and I was impressed. The house special sauce did not disappoint, as it was yummy and resembled a mix of what seemed to be sweet teriyaki sauce, soy sauce and a tiny hint of wasabi for that extra kick at the end. I could be slightly off with the flavors, but honestly it didn’t matter because it was one hell of a sauce that complemented the sashimi cubes perfectly.

The fish gave the impression of freshness without any strange tastes, although I noticed there were a few pieces that contained a little bit of skin that I couldn’t quite chew through. My brown rice was cooked nicely for the most part as some pieces were harder than brown rice usually is (like rice from the sides of the cooker), and all the other toppings were definitely on point. The spicy tuna was flavorful and the entire bowl made for a well-balanced mixture between savory, tangy and spicy notes.

As I silently thanked myself for choosing this as my lunch, I must admit that Pokilicious can’t necessarily be compared to the more well-known poke places in the Orange County, although it is a great substitute and definitely adds to the (not so existent) food variety near campus.

We sipped on our Dr. Peppers from the soda machine to temporarily pause from stuffing our faces with poke, and I noticed that they also offered desserts ranging from American traditional Tiramisu ($3.50) and cupcakes ($1.50) to Japanese-style cheesecake ($3.50). A cute little see-through fridge was decked with Coke and Diet Coke bottles and a larger drink cooler contained coconut water, Yoohoo and Red Bull to compensate for the lack of fountain drinks.

Satisfied and with some leftovers, we thanked the friendly manager Joe Luong on our way out as we grabbed a lid to conveniently put over the biodegradable bowls. If you’ve been hesitant to give Pokilicious a try, I definitely urge you to if you’re in the mood for sushi — minus all the hassle (and expenses of AYCE) that typically come with a meal involving sashimi. Despite the slightly more expensive tab, the unlimited toppings made it worthwhile and yes, I will be back to satisfy my poke cravings (and with that sauce) in the near future.