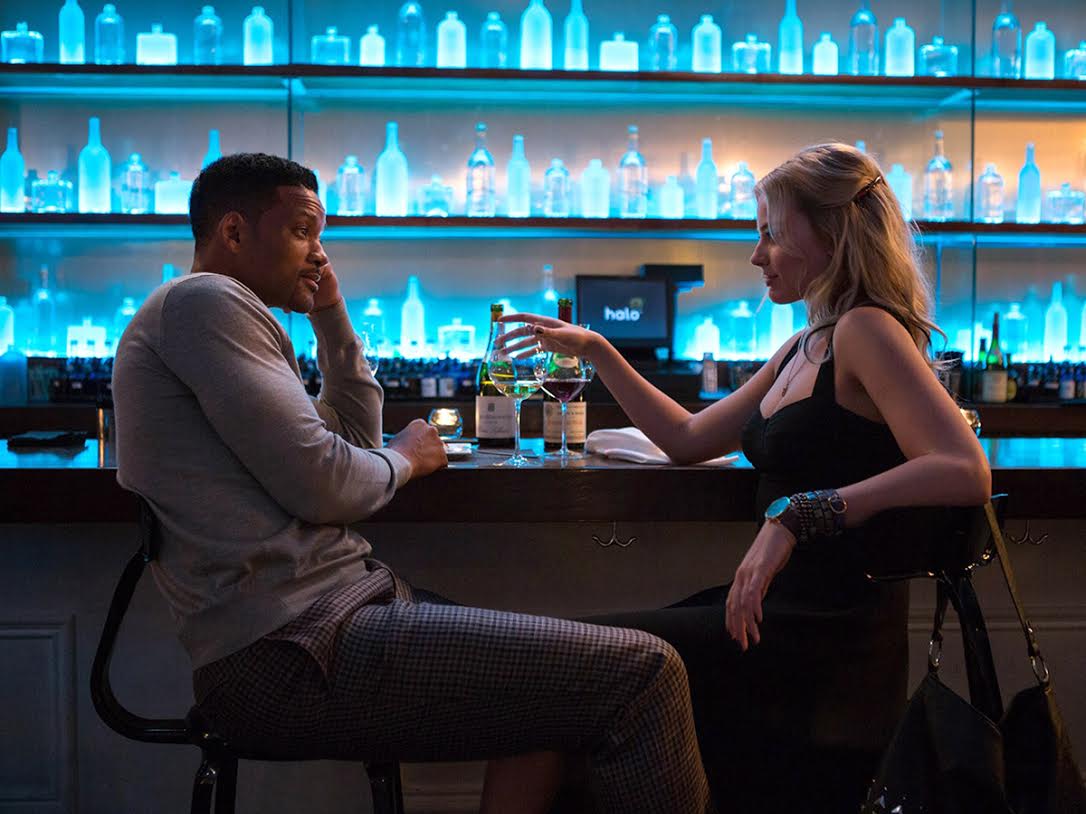 I’m sure that all of you reading this have come across the infamous “dress” picture that has been plastered all across social media since last Thursday. While I’m sure that it will have been forgotten by the time my words ooze off the page and into your eyes, with my cynicism filling your brain and replacing fond memories of your childhood, it serves as a perfect analog to the movie. The oversaturated, ambiguous picture is almost exactly like the film: hard to discern and with little to no meaning.

“Focus” concerns main character “Nicky (Will Smith),” a suave con man who takes wannabe con “Jess” (Margot Robbie) under his wing after she unsuccessfully tries to con him at an upscale hotel. The film starts off at a good pace, forgoing forced exposition in favor of introducing our two roguish heroes through a brief montage of them practicing their pickpocketing skills and exchanging witty dialogue. Throughout the montage, the film seemed to be building itself into a reimagining of “Oceans 11,” as the main cast discuss a heist that will allow them all to retire as they pickpocket and swindle the massive crowds in New Orleans. However, the plot is dropped and we’re treated to pointlessly drawn-out scenes of the cast stealing jewelry, counting cash and engaging in a series of PG-13 sex scenes intercut with R-rated dialogue. The stealing montages feature various bit actors hiding their ill-gotten wealth in ambulances, purses, pockets and hats of all things. I haven’t seen such inappropriate use of fedoras since I read a series of disparaging YouTube comments on a video posted by Anita Sarkeesian.

All of a sudden, the scene changes, the characters count the money, and half the cast leaves. The film begins unsubtly hinting that Nicky has a gambling problem, and he winds up betting all of the money at the Super Bowl. The film instantly takes on a darker tone, and it is implied, “Wolf of Wall Street”-style, that Nicky has a fatal flaw that will cost him everything he has worked for — not a flaw like crippling depression, anger management issues, or a drug addiction, but something cool and non-stigmatized like alcoholism or sex addiction. However, everything works out, somehow, and the two double their money. Nicky then abandons Jess on the side of the road and the film jumps ahead three years.

The new setting is Buenos Aires, and the plot is about Nicky selling fake racecar information or something. Also, Jess is around and dating one of the drivers for plot convenience, and Nicky begins aggressively stalking her, in a sorta-cutesy way, giving what seemed to be a crime-drama film the air of romantic comedy. Nothing happens for 40 minutes, Nicky and Jess have sex some more, and after a text message Nicky winds up bleeding to death on the floor of an automotive garage from a gunshot wound. However, a character that was originally thought to be evil winds up actually being Nicky’s long-lost father, and he reveals a bunch of plot twists and then tearfully monologues to the camera about the dangerous nature of con artistry as his son bleeds to death a few feet away from him. Then he drops him off at the hospital. The end.

Nothing that happened earlier in the film — the training in New York, the scamming in New Orleans, or the gambling at the Super Bowl — had anything to do with the end of the movie. “Focus” is only an hour and 44 minutes long, and an hour and 14 minutes of it is dedicated to absolutely nothing, the plot only taking place in the last 30 minutes. Rather than giving the audience a story that is engaging and fleshed out all the way through, the filmmakers dedicated more than half of the film to pointless filler.

I caught myself nitpicking about 20 minutes in. I noticed how characters would have their seatbelts on and off in one scene. Wine glasses would change levels between shots while two characters dined and talked. A man eats an orange without peeling it. I thought to myself, “This isn’t how you review a film,” when it hit me: I was trying to stave off boredom.

“Focus” isn’t without some merit, and for convenience I can list everything positive about this movie in one paragraph. The soundtrack is awesome, blending classic rock and modern hip-hop, and is one of the few films I’ve seen that has a diegetic soundtrack. Most of the dialogue is funny when the film isn’t being dour and depressing, with the comic relief character played by Adrian Martinez providing much of the humor. There’s also two long tracking shots that show off impressive cinematography. That’s about it.

What makes this film’s awfulness particularly bitter is the fact that it had all the ingredients of a good film, but flopped in its execution. Margot Robbie and Will Smith are stellar performers, and there are many story elements present that could have worked if the film had a coherent narrative. I feel as if the filmmakers were a group of schoolchildren setting out to play with a big box of fun cinematic toys. Unfortunately they tripped, ruining all their toys and poking their eyes out in the process. I’m actually kind of jealous: If someone had poked my eyes out I wouldn’t have had to see “Focus.”