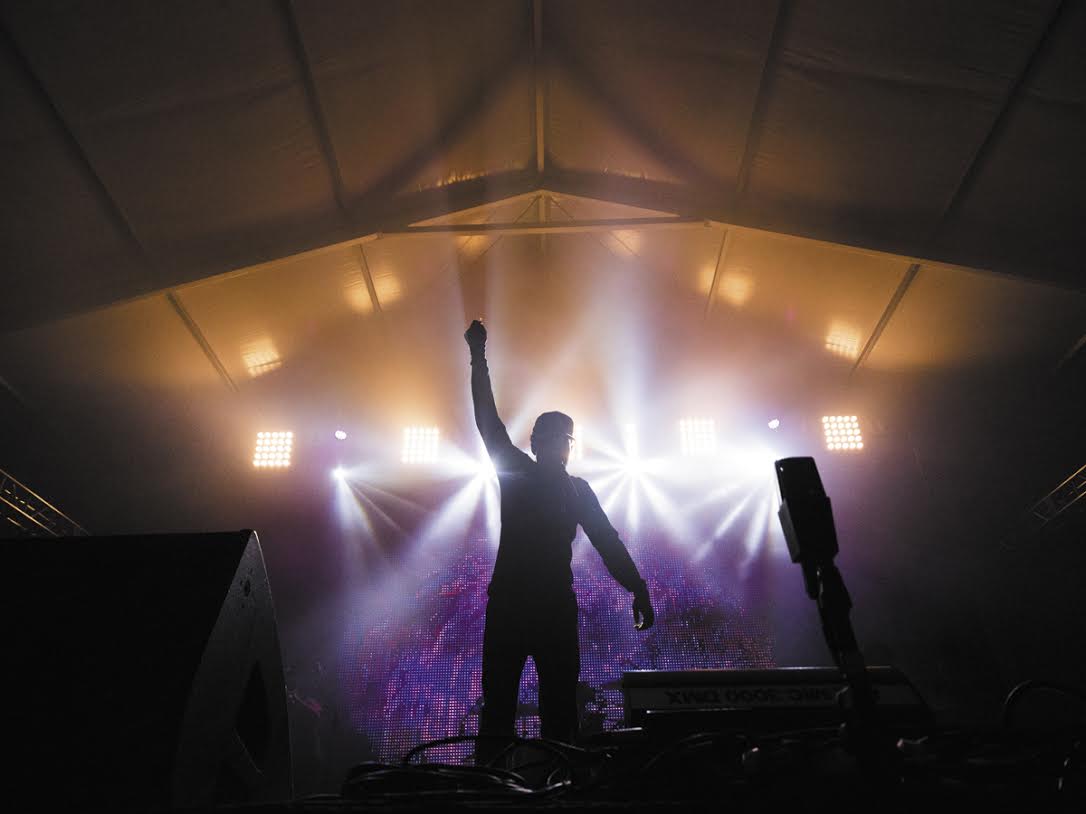 We may thank the rain gods and their mercy, for last year’s downpour has been replaced with Heat. Bodies smashed, booties shook and music exploded all around the campus center. The music variety ranged from middle school nostalgia-inducing Panic! at the Disco to the dance-inducing indie band Smallpools to the entrancing beats of EDM artists 3lau and Giraffage. As Heat’s headliner, the energy Chance the Rapper’s psychedelic performance gave off was matched and echoed only by the unholy roar of that stage’s massive, stuffed, fire-code-breaking crowd. Everything was awesome.

As I stood in the small throng of people gathered beneath the Highland stage’s tent, I began to revel in the fact that this was not only my first Heat since my freshman year in 2012, but that it was my final one. As I glanced around, the stage DJ, Nomad Navi, seemed about as interested in his performance as the crowd was in his small attempts to get them hyped. No matter — despite a lackluster start, I was happy to be here for the first time in three years.

I heard a cheery “Hey!” from my side. As it turned out, it was a member of my orientation group who I had barely seen since the summer of 2011. We chatted and caught up, straining to hear each other over Nomad’s beats, and I felt a sense of nostalgia wash over me — my first Heat since freshman year had brought back old memories from the first time around, and seeing someone who was one of the first people I knew on campus felt great. And as the lights dimmed, cheers swelled and we settled into our spots in the crowd, I felt ready to enjoy my last Heat with fervor — and Smallpools was a great way to begin.

Suddenly, the stage brightened. What appeared to be Bradley Cooper with a hipster-mullet (actually lead singer Sean Scanlon) came to the front of the stage with a conductor’s baton, as he directed an invisible orchestra with Vivaldi’s “Four Seasons” booming over the speakers. Soon enough, the orchestra’s flourishes were accented with thunderous bass from the drums, and the familiar chirp of the guitar on the song “Over & Over,” began.

Though a bit repetitive in song structure and style, the band’s shiny, synth-laden indie pop was the perfect way to get the crowd warmed up for the rest of the night. Jokes about the cold, dark world ahead of us after college were washed away with upbeat, danceable tunes that helped concertgoers forget their problems. Though not innovative or much different from the original, a solid cover of College and Electric Youth’s “A Real Hero” (from the “Drive” soundtrack), as well as original songs “Killer Whale,” “Karaoke” and “Mason Jar” were all highlights.

As the clock ticked toward the end of their set, the last song of the night from the band became obvious. As the familiar pounding of the staccato synths pulsated through the crowd, phones simultaneously shot up to record the band as they dove into their hit, “Dreaming.” As the crowd belted along with the band, the lyrics in the bridge stood out: “The world is in your palm now / So take a breath and calm down / ‘Cause you have been selected, you’ve been selected.”

Cheesy? Maybe a little. But on a night of rekindling past connections while simultaneously looking to the future, it was a nice reminder to enjoy college, and the opportunities and friendships it brings, while it lasts.

Panic! at the Disco and a panic in the audience

Panic! at the Disco’s set was immediately looking to overwhelm the audience. The instant Smallpools left the stage, the crowd surged and pulsed as impatient concertgoers pressed in further to get a good view of Brendon Urie and company. Short people were pressed face-first into the chests and backs of people they may or may not have known, and everybody with long hair learned the virtues of keeping it tied up instead of hanging it loose. When the band finally took the stage, many of the crowd had already fled or at least attempted to make their way to a less congested spot.

For their part, Panic! seemed to have the perfect crowd, and launched immediately into creating the most out of the already eager onlookers. The first few songs that Panic! played came from their more recent album “Too Weird to Live, Too Rare to Die,” including a somewhat troubling story that preceded the song “Ms. Jackson.” Panic!’s hold on the crowd was undeniable. Each song was greeted with more enthusiasm than the last, and the stark background made for a show that made great use of the performers’ movements on stage.

Brendon Urie, whether you appreciated the content of his banter or not, proved a brilliant MC, and constantly kept the energy high. He was so adept that once he was even used to keep the over-rowdy crowd in check. The entire performance flowed like this, as at one minute the crowd would be enjoying the show, and the next, every step became a battle just to maintain balance as you were pushed and pulled from every direction. At one point, a pantsless man even tried to desperately leave the crowd.

When it was possible to give full attention to the stage, though, the song choices were phenomenal. Though primarily pulling from their newer albums, the cherry-picked “Nine in the Afternoon” and “I Write Sins Not Tragedies” were inevitably huge hits with a crowd that listened to them all throughout middle school. Beyond that, they even covered Queen’s “Bohemian Rhapsody” which, while it didn’t have the vocal stylings of the late great Freddie Mercury (and how could it?), still managed to enthrall the crowd in its entirety.

The highlight of the performance had to be the finale though, as Panic! broke into “I Write Sins Not Tragedies,” and headliner Chance the Rapper came out to join in the reverie. This final cherry on top left what could only be a good taste in the mouth after Urie’s “metaphorical fucking” that he promised at the beginning of the show.

Chance the Rapper brings energy and acid rap to UCR

Panic! at the Disco was followed up by the acid rapper himself, Chancelor Bennett — better known as Chance the Rapper. Heat’s headliner performed at the Highland stage and induced a frenzy like no other. Before he even took the stage, concertgoers pushed and shoved in an effort to get closer and to be quite honest, I thought I’d pass out from stress and exhaustion before the Chicago native even got a chance to perform. Before things could get too out of hand, the 21-year old emerged also joined by alternative jazz band The Social Experiment. Donned in a The Social Experiment hat and a black, long-sleeved shirt, he greeted the crowd and proceeded to put on a show that UCR students will never forget.

He performed several songs from his critically acclaimed mixtape, “Acid Rap.” During songs like “Pusha Man” and “Everybody’s Something,” you could almost hear nothing but the crowd rapping the verses. During “Juice” everyone yelled, “I got the juice!” while Chance grabbed a water bottle and splashed water into the crowd, and by the time he got to one of his most popular songs, “Cocoa Butter Kisses,” my own voice was almost completely shot. Chance used the entire stage to his advantage, bouncing from one place to the next in an effort to interact with everyone.

One thing Chance is undeniably known for is his unique blend of sounds. His music consists of rapped and sung vocals over jazzy instrumentals, reminiscent of old-school soul and blues tunes, and as I glanced as far as the two people pressed up against me would allow, I realized I couldn’t spot a single person who wasn’t dancing, screaming or bobbing their head to the music. Although most of his set list consisted of “Acid Rap” tracks, he made sure to perform songs like “Brain Cells” from his first mixtape, “10 Day” and “Sunday Candy,” a song that he put out late last year with The Social Experiment.

The only thing that would’ve made his set better was if he’d performed all the way until 10 p.m. After he left the stage, a few people shouted “Encore!” and lingered to see if he’d reappear but to our disappointment, he was done for the night. Despite the abrupt ending, Chance the Rapper and The Social Experiment definitely created a concert experience to remember.

The trance-heavy music made itself at home at the Vantage stage with the appearance of Giraffage. Performing after DJ Suma warmed things up for the crowd, Giraffage took to his signature style of trance and mixed it with an upbeat, heavy bass. Students left and right got into his music with fervorous energy. The light scene dancing around the set was also incredibly spectacular, as his psychedelic performance used the stage setup and LED panels liberally to showcase images of frolicking puppies, sailor scouts, old-school eight-bit scenery and mesmerizing color vectors — even his stage name was spelled out in Japanese using the electronic equipment. Giraffage is right to self-identify his style as “left-field music,” as his unconventional visuals and beats imprinted in the crowd’s collective memory a remarkable experience.

As the last performer at Vantage, 3LAU had the short end of the stick with the crowd, who expended a lot of energy dancing to DJ Suma and Giraffage. Identified as a progressive house artist, 3LAU knew how to mix up what would normally be a bland house track with melodic rhythms and heavy sampling. His stylized and unique beats gave the Vantage crowd the major energy boost they needed to go crazy to his music. It felt like the crowd squeezed in even closer together as it jumped and grinded in unison. If Heat ended with a bang, students wouldn’t have heard it due to 3LAU’s music ringing in their ears long after the concert ended.