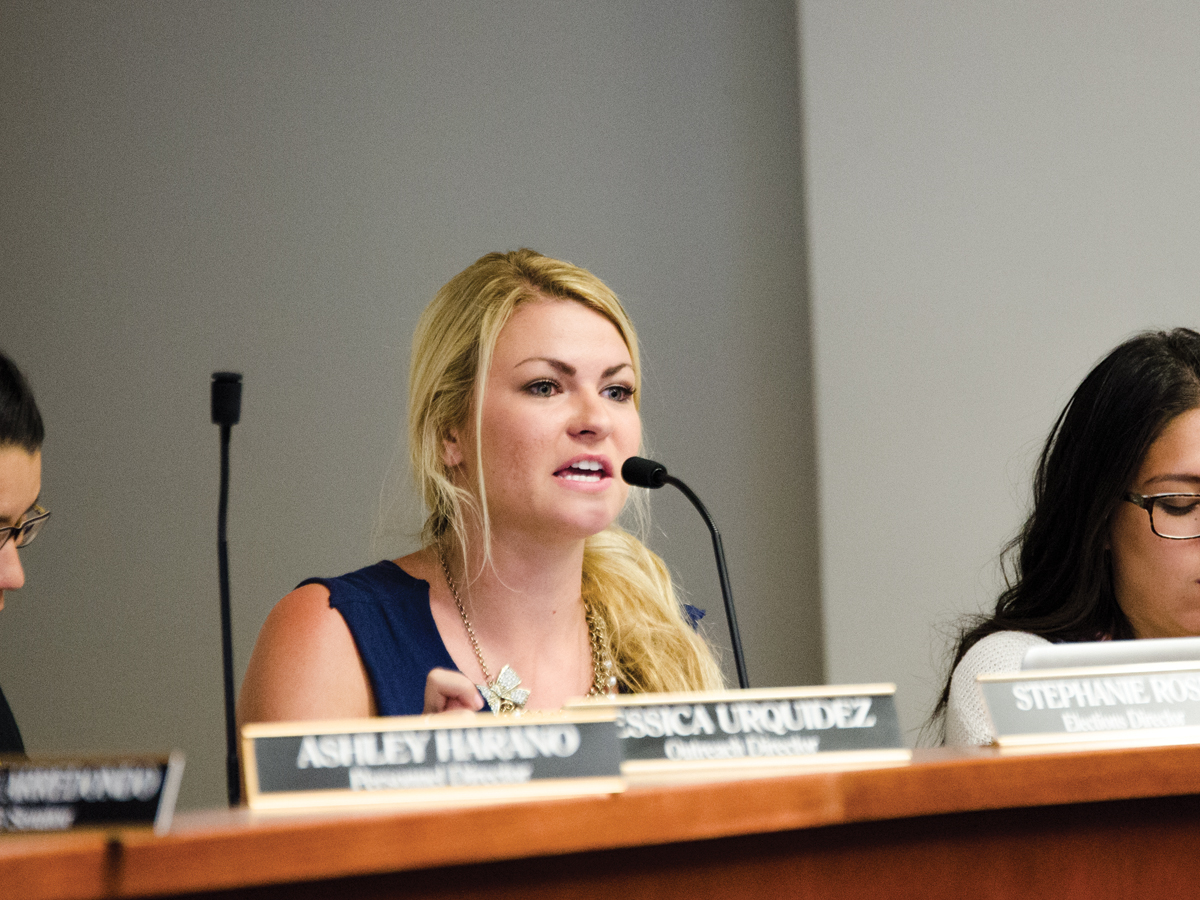 Tensions have spiked in ASUCR after two senate meetings, during which the removal of a laptopping bylaw and an attempt to overturn an executive order to reinstate two justices, displayed a divide between members of the senate and the executive cabinet (ECAB).

Complaints regarding laptopping by [OUR]Voice, and debates over whether alleged attempts to block punitive actions against the party violate ASUCR’s system of checks and balances, called the integrity of ASUCR elections into question.

Laptopping is a banned campaigning practice that involves having a candidate or party volunteer approach students with an electronic device to solicit votes for their party. Due to its controversy as a potential form of coercion, the practice has been banned since 2012.

Issues regarding the questionable practice were brought up by students during Wednesday’s public forum. Multiple representatives from PAC: Pride, Action, Change and [YOU]CR brought forward numerous incidents, claiming that the judicial branch failed to address them.

According to multiple members of the galley, pictures and video evidence of [OUR]Voice candidates laptopping were brought to the judicial branch, yet the students participating did not receive strikes. A candidate may receive up to three strikes before being removed from the election.

Ashley Harano, [OUR]Voice’s candidate for ASUCR president, declined to comment on the laptopping accusations on behalf of her party.

Elections Director Stephanie Rose stated that the main obstacle was a clause in the bylaws which stated, “to avoid unclear and/or false violations, complaints about laptopping campaigning must be registered only by students who are approached and asked to vote.”

To eliminate this problem, Rose motioned to remove the bylaw to allow students who witnessed laptopping incidents to file complaints. Executive Vice President and [OUR]Voice candidate Michael Ervin, however, quickly opposed making the change in the middle of elections.

“To be able to change one in an elections bylaw in the middle of when elections is going on, without any kind of notice to the senate … is not allowed in our bylaws and I don’t see any way around it, unfortunately,” Ervin explained, adding that the removal also needed the approval of the legislative review committee (LRC).

Argument escalates between Galvan and Ervin

Emotions quickly rose when Ervin attempted to consult Parliamentarian and fellow [OUR]Voice candidate Mohamed Hussein regarding the bylaws in reference to whether a removal of the clause was constitutional, which Vice President of External Affairs Abraham Galvan quickly objected to.

“This is not a matter of parliamentary procedure,” Galvan argued.

“It is actually, because it directly contradicts what our bylaws state … unfortunately this is highly controversial to try to change the elections process … when voting is happening,” Ervin retorted.

Ervin and Galvan continued exchanging jabs, with Ervin threatening to dissolve the meeting, and Galvan countering with a motion to remove Ervin as chair and hold an emergency meeting in response.

After further discussion, Hussein did not find anything in the bylaws preventing the removal of this clause, which passed unanimously. The removal of this bylaw may affect any pending elections cases regarding laptopping incidents as brought to the elections committee.

After the decision, Galvan called the senate to bring charges against Melina Reyes, chief justice of the judicial branch, for failure to perform her duties according to the ASUCR constitution and bylaws, and allegations of being unfairly appointed to that position. Justice Daniel Ojo was also brought up on charges for allegedly leaking information to a potentially disqualified candidate without giving Rose notice.

After a closed session, the senate held a hearing to try Reyes and Ojo, in which the senate voted 12-2-0 to remove Reyes and 9-3-0 to remove Ojo. This resulted in the branch’s failure to meet quorum, which was to transfer pending elections cases to the elections committee, which Rose leads. As of press time, Rose asserts that she has not received the cases.

Executive order and calls for censure

President Nafi Karim made an attempt to repeal the bylaw change and reinstate the justices the following day via executive order. In response, the senate held an emergency meeting on Friday to overturn the executive order, with Galvan calling for the censure of both Karim and Ervin in advance of the May 6 meeting.

Despite the senate’s vote, the judicial branch claimed that Friday’s meeting was unconstitutional and the nullification of the executive order was void. On Sunday, May 3, Ojo contacted Vice Chancellor of Student Affairs James Sandoval and Chancellor Kim Wilcox directly regarding this decision.

Regarding Ojo’s email, Rose stated, “I’d first like to note that Daniel was very selective in who he sent that email to and I was not a part of it. However, I think it is a complete conflict of interest for him to be sending out any emails on behalf of Judicial at the moment.”

“Additionally, the constant attempts from Judicial Council, the ASUCR President, and ASUCR EVP (executive vice president) to overturn Senate’s decision is both unconstitutional and shameful. It has been made public that the President and EVP have personal interests tied to these decisions made by Senate and I believe their actions are completely influenced by party politics,” Rose concluded.

Galvan further elaborated that attempting to contact administrators in an attempt to intervene in senate decisions is problematic, as it is the duty of ASUCR to handle its own affairs. In addition, Galvan agreed that the executive orders issued were not valid.

“Please rest assured that neither I nor our General Counsel are concerned with the outcome of the election (i.e. who is elected into office), rather, we are focused on the degree to which ASUCR has followed its Constitution and By-laws (sic), and Federal, State and University law, regulation, and policy in decisions that potentially have an impact on the outcome of the election,” Sandoval stated in an email.

“Throughout the year, the president and the executive vice president have been often questioned by senate as to the way they operate in the office.” Galvan said after Friday’s meeting. Ervin’s failure to release the summer meeting minutes to the public and the cancellation of ASUCR’s winter retreat were among the reasons for Galvan’s call for censure.

In regards to Karim, Galvan cited the controversial appointment of the justices last November. Only Ervin, Karim and Vice President of Finance Iris Jiang selected the justices, calling the transparency of the appointments into question.

“If we go back throughout this year, there have been a lot of questions regarding mainly the transparency and whether we can evaluate that the president has been … following their duties in the constitution and the bylaws,” Galvan explained.

Karim and Ervin did not return requests for comment as of press time. To provide enough time for candidate appeals, election results will be postponed until May 6 at 1 p.m.

“There’s some members of ASUCR that are trying so hard to grasp onto that institutional authority and their connections with other branches and other individuals to exercise that power in a way that relates to elections,” Galvan explained.

– UCR’s Undie Run, a charity event in which students will strip off and donate their clothes while running, is scheduled for May 7.

– Feminism Awareness Week, an event to dispel myths and rumors about feminism, will begin Monday, May 4.

Contributions made by Amy Zahn and Colin Markovich.

Video coverage of the senate meeting can be viewed at www.youtube.com/UCRChannelH