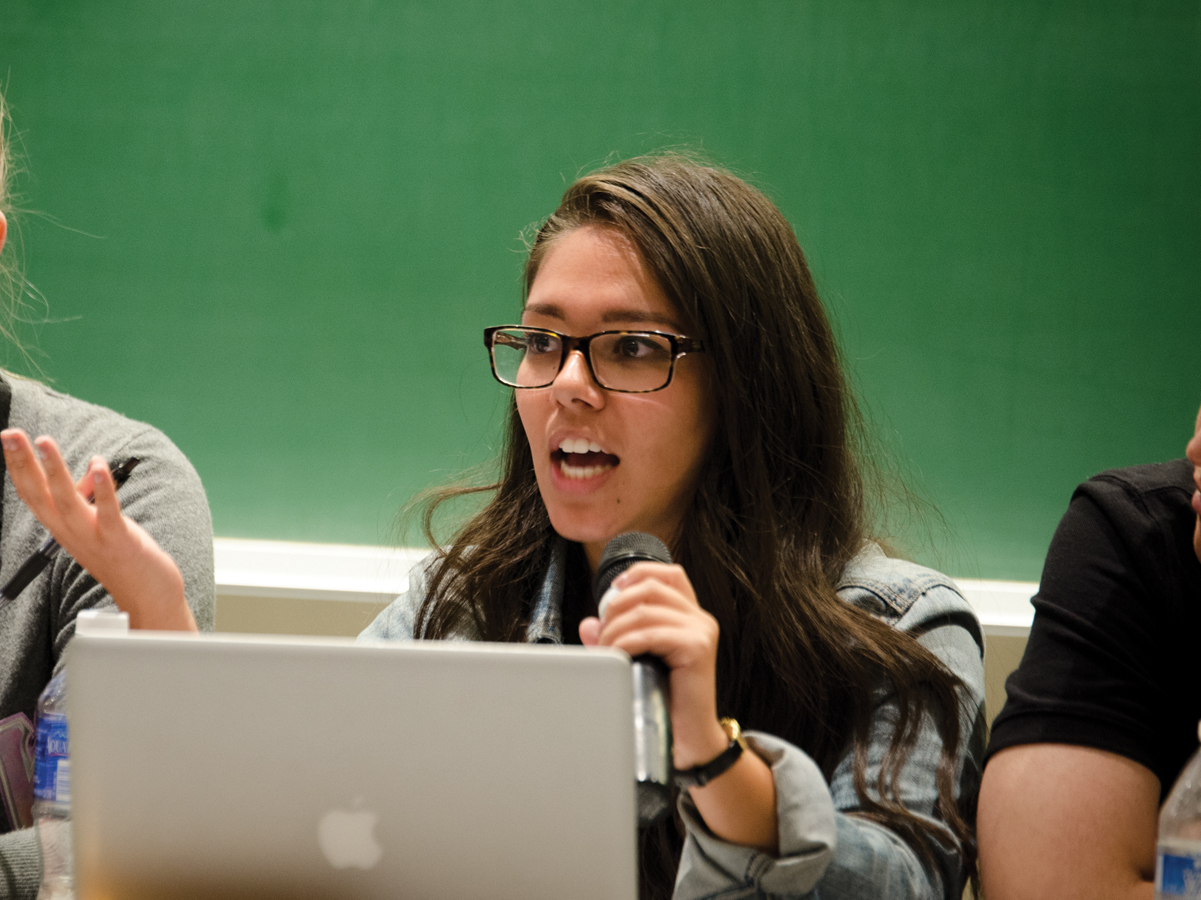 In a lecture hall packed with over 100 students, candidates from PAC: Pride, Action, Change and [YOU]CR expressed discontent with the judicial decision that allowed [OUR]Voice to return from disqualification and dominate this year’s elections during last week’s senate meeting.

Following the discussion, the senate voted to give themselves jurisdiction to review appeal cases that were previously heard during the May 8 judicial meeting, which was deemed unconstitutional. As a result, [OUR]Voice will be retroactively disqualified from the positions they have won unless the senate approves their appeals.

Among other things, a notable resolution supporting divestment from the Republic of Turkey was unanimously passed by the senate. The bill defines genocide and outlines Turkey’s refusal to acknowledge the Armenian genocide.

Parliamentarian and [OUR]Voice candidate Mohamed Hussein was also removed, which may jeopardize his elected position as vice president of external affairs for the 2015-16 academic year.

Waves of students gathered in Life Sciences 1500 amid rising tensions over the elections process and past controversies involving illegal campaigning.

Days prior to the meeting, a change.org petition was launched by UCR students, calling into question the validity of the May 8 judicial meeting that repealed [OUR]Voice’s disqualification. They claim that since only two out of the three remaining justices were present for the entirety of the deliberations, the decision is invalid.

“I want a fair election to elect students that actually want to represent the student body instead of using the position as a resume booster and job,” expressed fifth-year political science major and signer of the petition Aaron Casas. “I want a fair reelection with clear guidelines and complete transparency of student funds on campaign financing.”

The judicial branch said in a statement that the justice had “unavoidable responsibilities to tend to,” and that he was present when the branch made the final decision.

Many approached the senate with evidence of potential misconduct by [OUR]Voice, including audio that allegedly reveals an [OUR]Voice member coercing someone to vote for them on their phone and emails from a student claiming they were forced to vote. “I felt that I had no choice,” read an email, which was read aloud by second-year economics major Oscar Campos.

Members of [OUR]Voice came forward to defend themselves against the accusations.

Emily Yang, [OUR]Voice personnel director, voiced concerns over the abuse she and other party members have endured on campus and social media due to accusations made against them, including a series of posts on the app Yik Yak targeting them. “My integrity has been called into question,” she said. “I wouldn’t spread malicious bias about any candidates, especially if I didn’t have facts … I’m tired of all this hatred among us as student leaders.”

“I felt personally attacked by some of the messages,” agreed [OUR]Voice member Dez’Gillai Jackson.

Hussein alleged that Elections Director Stephanie Rose acted favorably toward members of organizations she is part of. Senator Colette King responded by pointing out that Hussein, along with several other members of ASUCR and [OUR]Voice belong to the same fraternity.

“Before you try to point out nepotism … I would tread carefully,” she said, pointing out that not all members of the same organization agree on all points, including Hussein’s fraternity.

Second-year [OUR]Voice candidate Joshua Lopez told the senate he earned his votes by being sociable and friendly. “I was just talking to people and having a good time. I don’t want to be that guy who forces someone to vote for me. I myself hate it so why would I do it to someone else?” he explained.

Rose also apologized for releasing the election results when she did, responding to criticisms that she should have waited to determine their validity first. “I should have withheld those results. I shouldn’t have verified them due to the controversies,” she said. Vice President of External Affairs Abraham Galvan chimed in, “There was a lot of pressure for the elections results to be announced. But I did want to say also that just because the elections results were announced doesn’t mean that the accusations of laptopping that were made aren’t valid.”

By an 11-1-4 vote, the senate gave themselves power to adjudicate appealed cases, which includes the disqualification of all [OUR]Voice candidates on behalf of the judicial branch. “They are in limbo until appeal cases are heard,” Rose expressed regarding the candidates.

The senate did not motion to hold a new election and it is still unclear as to whether [OUR]Voice members will be forced to temporarily step down from their elected positions.

Marketing and Promotions Director Ravin Rathod said, “We’re using the same time frame that’s used in the event of appeals after elections given that this is a special consideration, which is 15 days from today. Senate will deliberate upon all of them at once with all due urgency given that the accuser/accused can attend and senate can convene a special meeting.”

Some, like [YOU]CR candidate Nilan Gunewardena, felt that the Judicial Branch had not been transparent throughout the year. “I personally would rather let an elected body of representatives (the senate) decide the appeals than let three justices who were appointed decide the outcome for 18000 students,” he said.

PAC candidate Neftali Galarza felt that elections issues stemmed from the fact that some of the justices were controversially appointed by three members of the executive cabinet. He called out former President Nafi Karim for allegedly showing favoritism toward [OUR]Voice. He saw the senate’s decision as “the correct thing to do,” arguing that cases of illegal campaigning were disregarded by the justices.

The senate’s newfound authority may potentially lead to conflicts of interest due to the fact that some members of the senate will be making decisions that could work in their favor. President Pro Tempore and PAC presidential candidate Devin Plazo, as well as [YOU]CR candidates Summer Shafer and John Dell, also sit on the senate.

Others condemned what they claimed to be the senate’s infringement of another branch’s autonomy and their decision to affect the elections process, even after the election results were made public.

In response to the ruling, former justice Daniel Ojo hopes that remaining issues can be resolved in the way that they were initially. “I would like this to be resolved objectively and I don’t see the senate doing that. When the senate has the power to invalidate a whole branch because they don’t agree, that is a problem,” he said. “I would like for the three justices’ opinion to stand because that was the agreement by all parties involved.”

[OUR]Voice member Raashi Goyal said the senate was overstepping its role and felt it should respect the decisions of the Judicial Branch. “In my opinion, they’re being extremely biased and have ulterior motives. We have three branches for a reason — for checks and balances,” she said. “We don’t run on a parliamentary system.”

During a closed session, the senate voted to remove Hussein from his position as parliamentarian for failing to fulfill his duties, which include advising the executive vice president on Robert’s Rules of Order as listed under the ASUCR Constitution. Hussein may be in hot water, since his position as vice president of external affairs-elect requires a minimum of one year experience on the senate — a requirement that, due to his removal, he may not be able to fulfill.

Divesting from Turkey and housing the R’Pantry

A bill in support of divestment from the Republic of Turkey was passed unanimously by the senate. The bill defines genocide and outlines Turkey’s refusal to acknowledge the Armenian genocide. UC investments in Turkey total over $70 million and the passed bill encourages UCR to divest its financial support.

“This … is holding the Republic of Turkey responsible for the perpetuation and denial of the Armenian genocide, and it’s holding UC Riverside and the UC Regents accountable for ethical and unethical investments of students’ tuition,” said King, who helped present the legislation.

In addition, the senate passed a motion to temporarily house the R’Pantry in the ASUCR office. Acting President Fernando Echeverria explained the importance of ending the year with this decision. “We all know that hunger is an issue on campus and I want to make sure that this issue is addressed before we finish off our year,” he said. Echeverria stated that funds have been allocated to support the temporary location of the pantry.

Contributions made by Amy Zahn