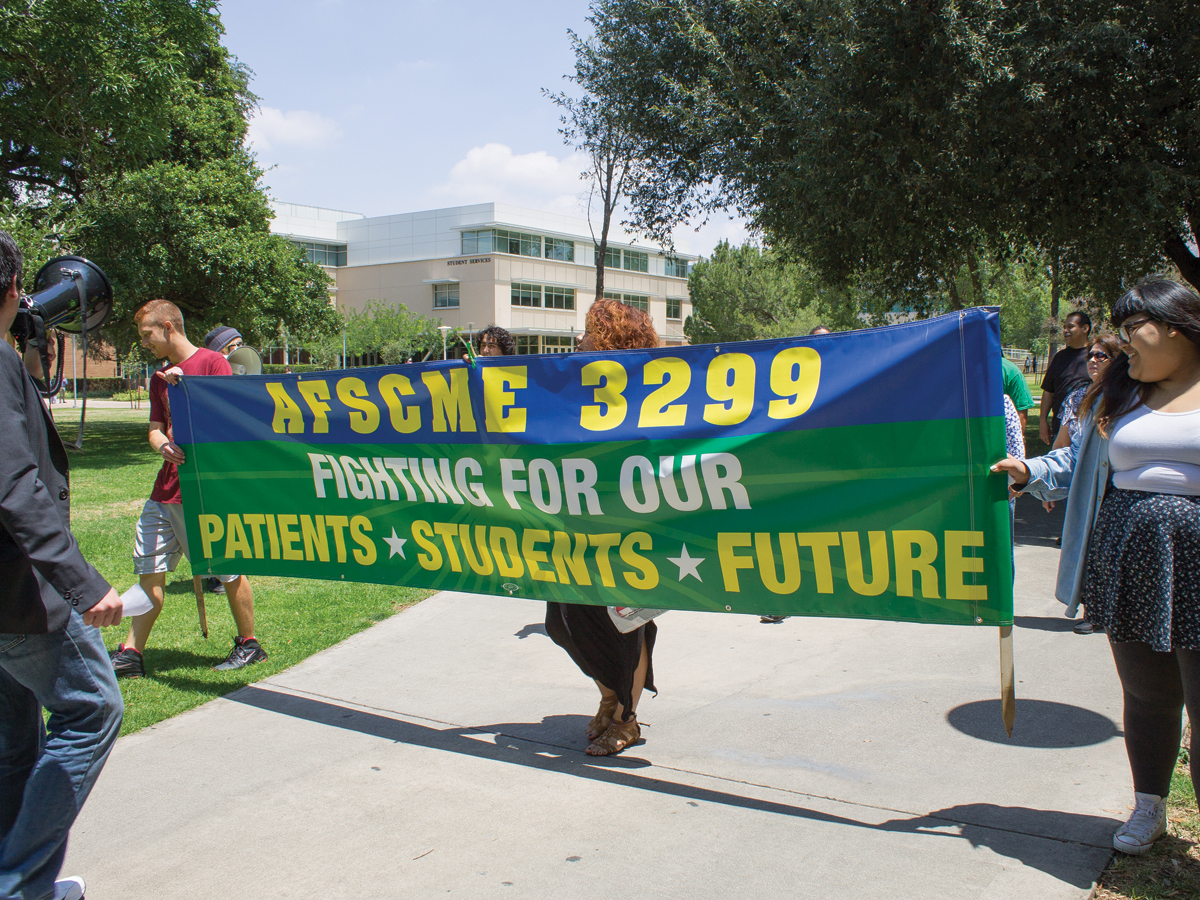 About 25 UCR workers and students gathered last Tuesday to march across campus in protest of UCR’s alleged unfair labor practices, including low wages, laying off employees and outsourcing jobs.

The demonstration, organized by AFSCME 3299, the UC’s largest union, began near the Bell Tower at around 12 p.m., made its way to Hinderaker Hall and wrapped up near the HUB amid chants of “UC, UC, you’re no good, treat your workers like you should!” and “They say cut back, we say fight back!”

“They’re cutting back where they say they’re not cutting back. They promised the workers that their job is secure, that they don’t have anything to worry about,” said Leo Tolliver, AFSCME representative and organizer of the event. “That’s not fair.”

Tolliver explained that AFSCME 3299 is fighting for SB 376, a bill that would require that private contractors who provide services to the UC receive equal pay to other UC employees performing the same jobs. According to a statement released by the union, the UC is currently contracting with thousands of workers — primarily immigrants and people of color — who perform groundskeeping, maintenance and food service duties. These workers, the statement says, are paid up to 53 percent less than other workers performing the same jobs.

“We’re doing this in solidarity with our workers,” said second-year linguistics major Johnson Pham about the protest’s student turnout. “Our tuition pays the salary of these workers, so we want to make sure they’re treated right,” Pham said.

Christine Stuckey, a UCR custodian of 13 years, expressed her feelings about longtime UC workers being passed over for promotions in favor of outside hires. “We got a stranger who don’t know nothing about us, and he’s going to be our boss?” Stuckey said, referring to the people who are chosen for promotions above UC workers. “They think that we’re just a piece of nothing, but we’re here to tell them that we are worth a whole lot.”

Neither Vice Chancellor for Business and Administrative Services Ron Coley nor representatives from the Physical Plant, the department in charge of maintaining campus facilities, responded to requests for comment.

“I feel the action was highly successful. It is very clear that students are always going to stand by their workers and be ready to put up a fight,” said AFSCME student organizer Yesenia Padilla.

Tolliver said that if their demands for fairer practices are not met, the movement will continue. “(Next) time, we intend to be bigger, more vigilant, more seen,” he said.