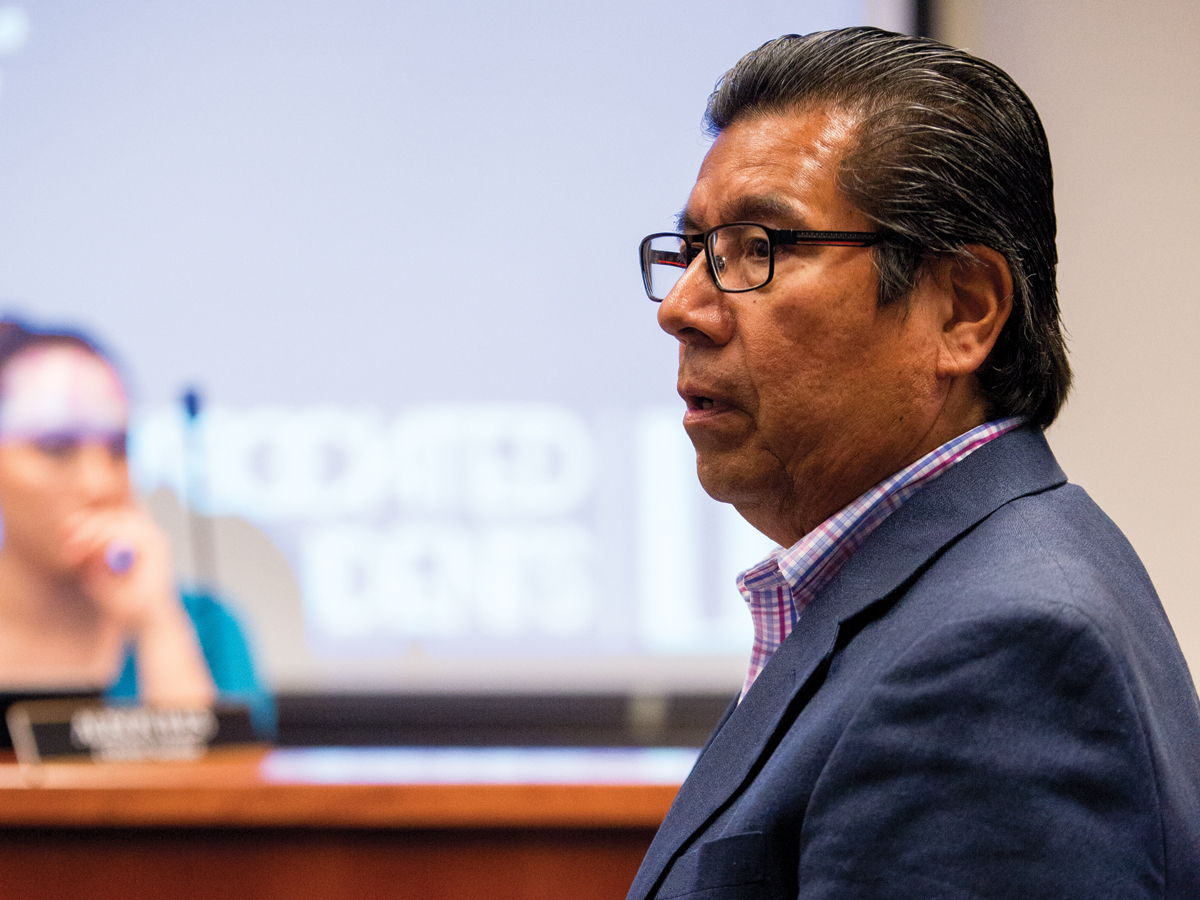 ASUCR senators convened in the senate chambers last Wednesday for the last meeting of the school year. Among the 12 items up for discussion was the amendment of the election codes to combat the controversial campaigning practice known as laptopping. Later in the meeting, city councilman Andy Melendrez and Head of City Planning David Murray discussed the progress on the housing ordinance that was put into place during the summer of 2013.

According to the elections code, laptopping, a practice banned since 2012, was defined as “when a candidate, party, pro-group, con-group, or anyone with approximate relation to them, approaches a student and asks that student to log onto a computer or other electronic device and vote in the election (usually coaxing students to vote in a certain way).”

Candidates of [OUR]Voice were accused of engaging in the unconstitutional practice and as a result two members of the senate, Melina Reyes, chief justice of the judicial branch and justice Daniel Ojo were removed from their posts for failing to adhere to the ASUCR constitution and properly addressing the charges brought forward by students and party representatives.

The change to the elections codes, which was passed through the senate with a vote of 13-0-1, dictates that voting will only take place in the designated polling stations and online voting will no longer be permissible.

“We had a lot of problems with laptopping and so we want to have just the polling sites be the places where you can go,” ASUCR Vice President of External Affairs, Abraham Galvan said. “Obviously it’ll be harder to get more people to vote but the parties can always campaign to get people to the polling sites but at least they won’t be able to immediately coerce them into voting on their phones. I really think that’s an important change.”

Other changes to the election bylaws include striking the ability for a party candidate to run for Elections Director, as the position is now appointed by the ASUCR senate.

All financial expenses that were allocated towards campaign materials, including banners and posters, are now required to be reported in financial reports, not just those used for promotional items and giveaways.

The ability to assign election violations has also been stricken from the judicial branch, reducing their involvement to only handling the appeals process regarding violations. With this amendment, the elections committee will be the only ones involved in handling violations.

Councilman Melendrez and Senior City Planner David Murray also spoke before the senate to give an update on the housing ordinance moratorium that was instituted in September of 2013.

“In setting this new policy, we did not want to move ahead without student input because we wanted it to be as balanced as possible so that we would be able maintain the quality of life [in our neighborhoods] and at the same time be able to provide the housing that students needed in those neighborhoods.” said Melendrez.

The housing ordinance moratorium was the result of a conflict between single family communities and their concerns of overcrowding, noise levels, property damage. Students, on the other hand, had concerns over affordable housing due to the moratorium and extra housing constraints that came with it.

An overlay zone has been applied to moderate these problems and applies additional standards to single family homes within the area. It is proposed to impact only places in the city where overcrowding exists and where inventors take advantage of modifying homes to “less than standard levels” in order to accompany more students per household according to Murray.

It establishes a minimum of 100 square feet to any new rooms being added to the house and does not apply to existing rooms.

Also, if a house contains five bedrooms or more, houses in the overlay zone require additional parking spaces that must be made available in order to alleviate overcrowding on the street.

The augmented housing policy will go through more rounds of community and student input before coming in front of the City Council in October of this year.

-Minimum academic progress resolution passed to require ASUCR senators to adhere to the UCR Academic Integrity Policy, Good Neighbor Guidelines and Standards of Conduct or risk their seat being vacated.

-R’Closet resolution changes language and omits the phrase “Dress for Success” as it is problematic and largely steeped in white supremacist and capitalistic notions of professionalism, according to ASUCR officials.