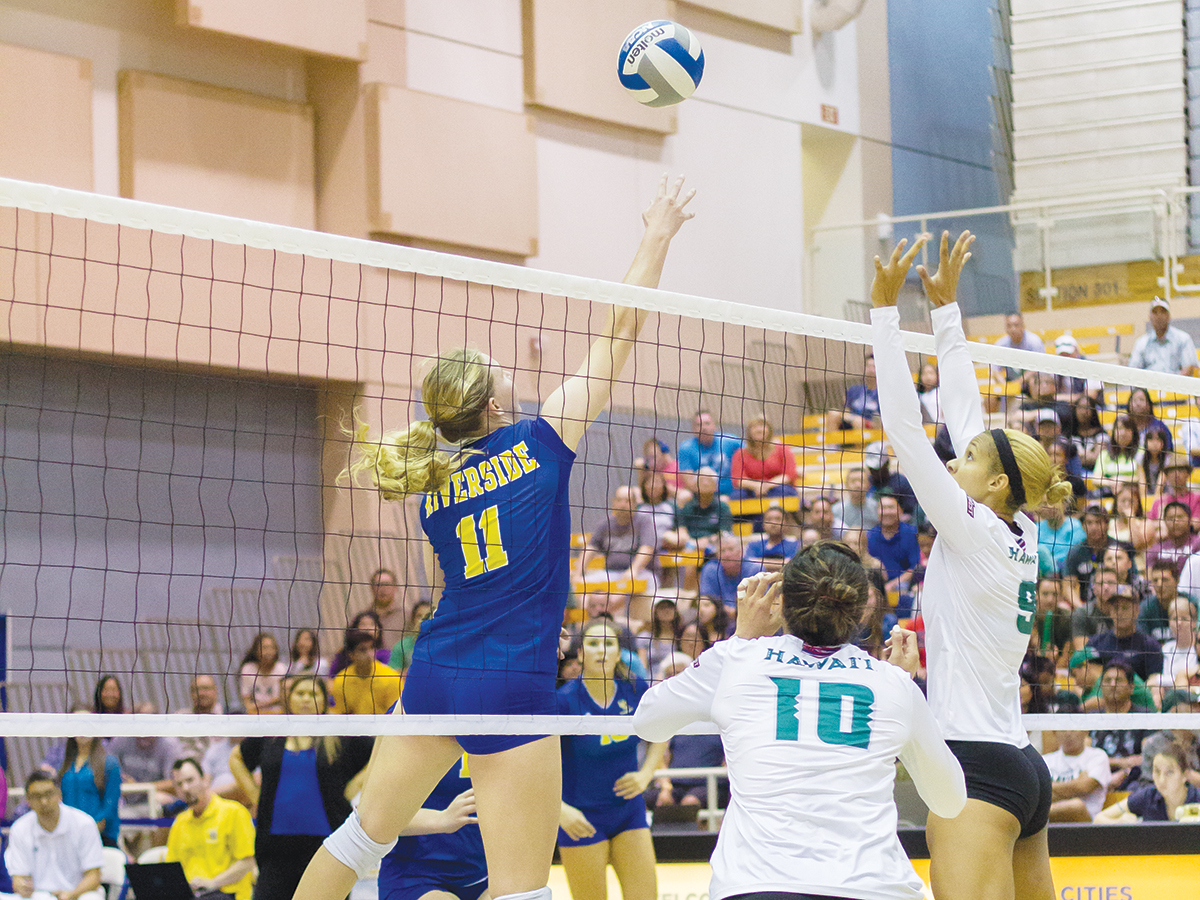 The UC Riverside women’s volleyball team lost to Long Beach State on Tuesday, October 6 in an exciting Big West matchup. Over the years, facing Long Beach State has proven to be no easy feat, as the last time the Highlanders defeated the 49ers was on October 1, 2011, 3-2.

And entering Tuesday’s match, the story — at least on paper — didn’t seem to be much different. Currently, Long Beach State is currently ranked 65th in the NCAA RPI Rankings while UCR stands at 220.

The individual standout for the Highlanders was  5’7” junior, Fabiana Rosas, who led both teams with 13 kills. Barbra Nele of Long Beach State also recorded 13 kills.

Although the Highlanders lost, the match was much closer than the score would indicate. In each of the first two sets, the Highlanders found themselves down one point, 20-19.  However, Long Beach State’s Mykah Wilson and Peyton Grahovac helped the 49ers score five of six points in both sets to give the 49ers the win.

The third set was a different story as Long Beach State took ahold of the momentum early on, which resulted in a 9-3 lead. UCR would get as close as five points but would lose that set as well.

The UC Riverside women’s volleyball team got back on the road last Saturday, October 10, to face UC Irvine for their second road game in a row.

Irvine started the first set with a 1-4 lead. However, the Highlanders scored three in a row thanks to a service error from Harlee Kekauoha, a shared block from Meg Graham and Cristina Maietta, and an attack error on UCI’s Kekauoha.

At one point, the score was 13-19, UCI but UCR managed to come within two points on the heels of a strong offensive effort by Graham, Cristina Maietta and Fabiana Rosas. However, that would be as close as they got as UCI took the first set, 20-25.

The Highlanders started the second set off strong with an early 5-1 lead . Graham recorded two kills, while Fabiana Rosas, Alexis Rosas and Cristina Maietta recorded one a piece.

UCR would reach a 10-5 lead. However, UCI took the lead after scoring four in a row. From there, the Anteaters kept the lead throughout the set, with the Highlanders coming as close as two points. UCI won the set 22-25.

The third set was arguably the most exciting with both the crowd and the players anticipating the end of the match. What resulted were exciting rallies and a close set.

With the score at 12 points apiece, UCI increased the pace of the game, pulling away from UCR with a few kills and points gained on errors.

The largest lead was UCI leading 10-16 but the Highlanders proved to be tough competitors by not letting the game go late in the set. With the match at 18-20, UCR’s Doyle added a kill as well as Rosas. That on top of a service error from UCI would be the last of the Highlanders points, ending the set 21-25.