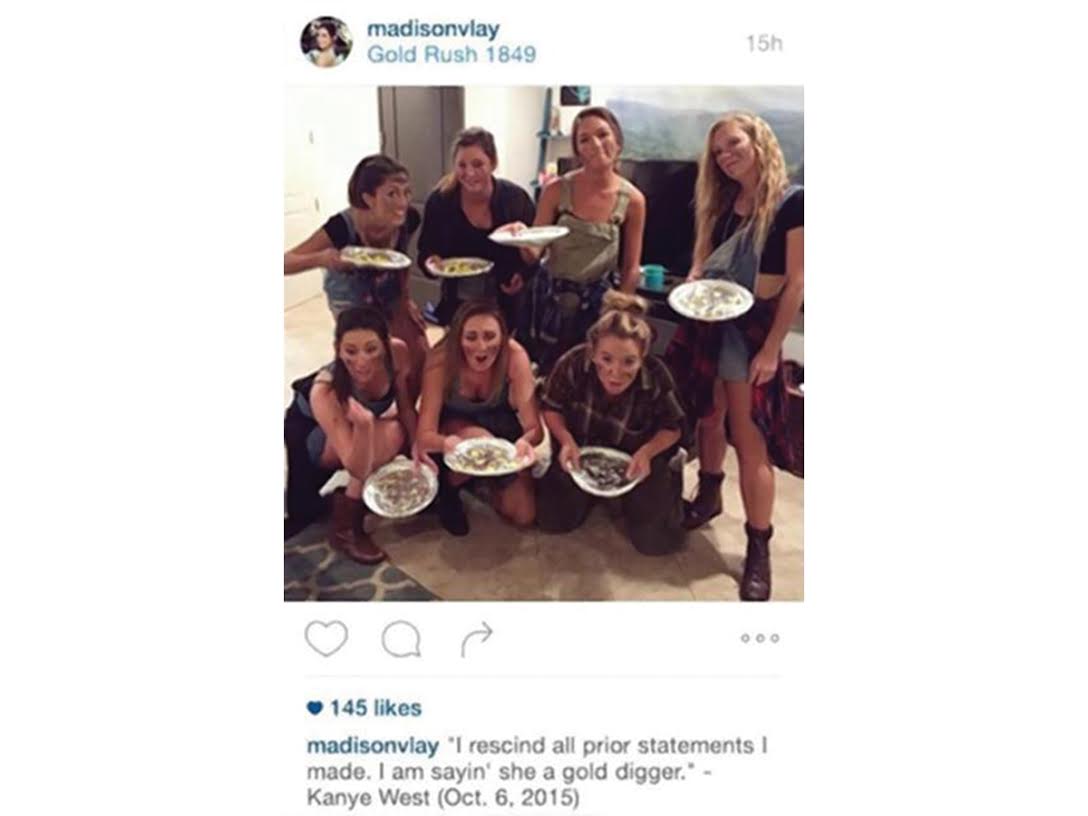 Hundreds of protesters came out to UCLA on Thursday, Oct. 8 to protest the campus’ Sigma Phi Epsilon fraternity and Alpha Phi sorority for throwing a “Kanye Western” themed party on Oct. 6. According to various students testimonies, the attendants at the party wore black face, baggy clothing, plump lips and padded bottoms to imitate the Kardashian and West family at the event.

After various pictures were posted of the party on Twitter, the hashtag #BlackBruinsMatter, began to resurface as many students felt that the party was mocking black culture. Kelsee Thomas, a UCLA student stated, “It’s extremely disrespectful for any organization at all to think that this is possibly a good idea … I understand the play on words, but there are so many other ways (to dress) to fit that.”

In response, the Greek life organizations have been temporarily suspended due to the activities. According to Sigma Phi Epsilon’s spokesperson Beaux Carriere, “Building diverse and inclusive communities is core to our identity as an organization, and we have zero tolerance for racist behavior. Sigma Phi Epsilon will continue to work with the university and UCLA community to investigate these claims and hold students accountable for any inappropriate behavior.”

Johnson Pham, a third-year linguistics major at UCR, stated on Facebook, “you know, i get folx telling me sometimes that i just search for problems & that the social conditions i write about don’t really exist, but then a frat goes ahead and does blackface … again … and proves my point w/o me trying.”

Two UCR undergraduate students, Spencer Salazar and Brandon Tran, have been named finalists for the international 2015 Undergraduate Awards, the largest academic awards program in the world. Salazar and Tran are students in the psychology department, and are from the classes of 2015 and 2016, respectively.

The undergraduate awards are offered to any undergraduate juniors and seniors across all disciplines. This achievement is used to highlight undergraduate coursework and research projects which have received an A or higher, and between 1750-5000 words with the exception of certain sciences which can go up to 12,000 words that the students took part of in the previous school year.

Both Salazar and Tran stated that they hope these nominations will create a positive impact on the UCR community. “I sincerely hope that this nomination will bring more attention to UCR and the other great research that is being conducted here at this university. I want others to realize that the University of California, Riverside is one of the top universities with some of the greatest and most caring faculty,” Salazar stated.

Tran agreed with the sentiment stating, “I hope my nomination will inspire other students within UCR and the community alike that it is possible to achieve prestige and success, regardless of where you attend. Specifically, there has been a lot of animosity toward UCR in terms of how it stacks against other schools. Terms like ‘UC Rejects’ are discouraging, and I’ve honestly felt the sting of feeling inferior to friends from high school who went to other schools.”

“However, I’ve come to learn and hope to inspire others to realize that it is not where you attend that follows you, but rather the achievements you make given your situation,” Tran concluded.